Before I dive into the ride report, I have a quiz for everyone. First look at your hand, and now look at your fingers. Compare the lengths of your ring finger to your index finger.  These are the fingers on each side of everyone's favorite finger.  The ring finger is on the side next to the pinkie. If you are married it probably has a gold band on it. The index finger, usually used for pointing is next to the thumb.  Now compare the lengths of the two fingers.  If your ring finger is longer than your index finger that means that your were exposed to more testosterone in utero, making you a manly fetus.  Those of us with the longer ring finger are also apparently more attractive to the opposite sex.  I'm not quite sure how women go about checking out relative finger sizes, but in general women seem to be more discrete in the appraisal compared to the male predisposition for leering. I tried to surreptitiously get some shots of everyone's hands yesterday, but I was too oxygen depleted from trying to keep up to focus. Although given the deformity of my hand and my success with the fairer sex, I'm not sure how much I believe this report. 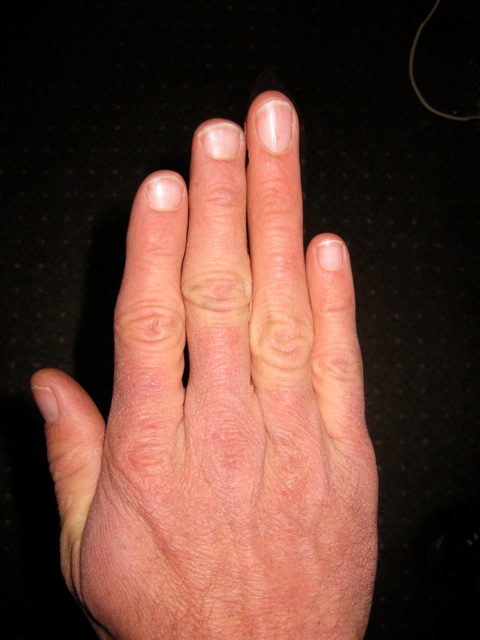 Now onto the ride. We got lucky this year.  In past years myself and other have ridden Buttercup in torrential rains,  thunderstorms, and trudged through major snow fields and been blocked by extensive downfall. People have taken wrong turns and have come out in the dark after babysitting visiting riders from Missoula.  I discovered what a couple of Warwicks up the road means on my first Wednesday night ride here years ago.
This year the rain cleared out before the ride. The snow was nearly absent except for a short diversion at the end of the road.  Eric and his elite squad of women sawyers had  generously cleared the trail beforehand.
Several of the riders with adderall deficiencies hit the road right at 5:30 leaving those of us who arrived at 5:32 to try and catch up.  I was once again reminded that I can't enage warp drive right from the start. I really admire people like Dean and Jeff who can hit the ground running.  When I try and do that my legs turn to gelatin. It simply isn't worth it when there are 20 miles to go. if I just let myself warm up for the first 10 to 15 minutes, I can survive the remainder of the ride so much more easily, and not have a premature spewing.  Of course that meant that I was a lonely caboose riding up Sleeping Child. 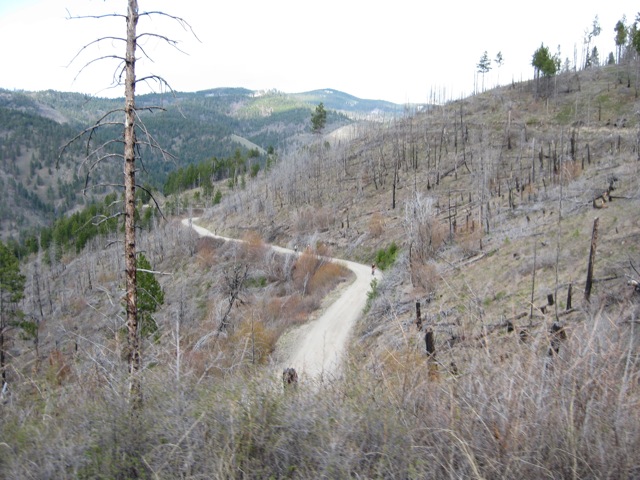 Some long lost faces were present when everyone regrouped at the bottom of Two Bears for the beginning of the real climbing.  Kevin with his new grill, Heinzen with his new hip, and Chris with his old downhill bike were warmly welcomed.  At the top of the first climb  the Mustache, needing his ritalin fix, kept going while everyone else waited at the usual waiting spot. 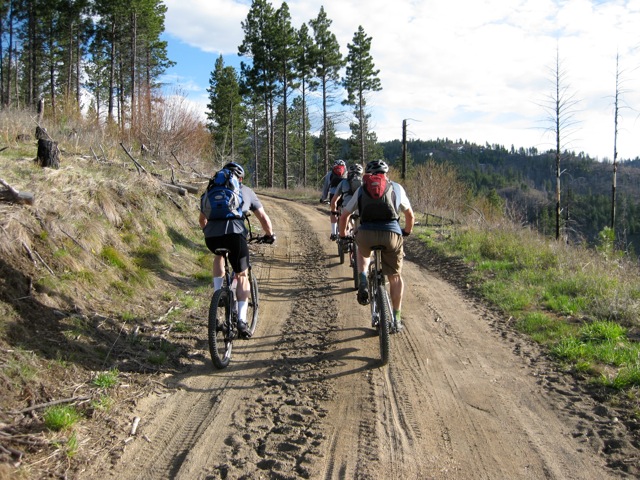 Once again I have to say the Mojo keeps living up to its reputation on the way up and the way down.   In the past, I have always struggled up the first single track climb before the descent, but this year, while still a bear, was now a teddy rather that a kodiak. 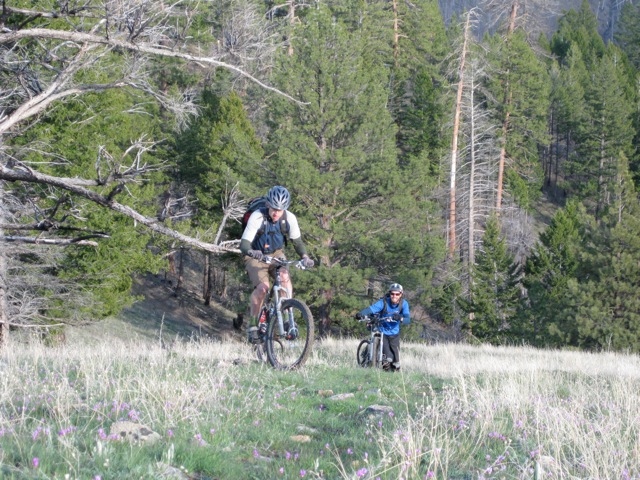 As some of you may know I miss every other Wednesday ride due to conflicting engagements.  So occasionally I have been to ride my bike on unsanctioned weeknights.  A few weeks ago I was riding around Como when I stumbled upon something I had always thought was a myth. I discovered a clan of Thursday Night riders.  Actually I discovered strong signs of their presence; a clusters of Subarus and SUVs with Thule racks in an otherwise empty Como parking lot. From the rumors I have heard they are the mutant spawn of laboratory experiments gone wrong, living on
kombucha tea and a strict vegan diet.  What I discovered seems to confirm these rumors. By the time I returned to the parking lot by 8:30 the Outbacks were gone without me ever crossing tracks with another cyclist or finding evidence of  grilled meat or beer. 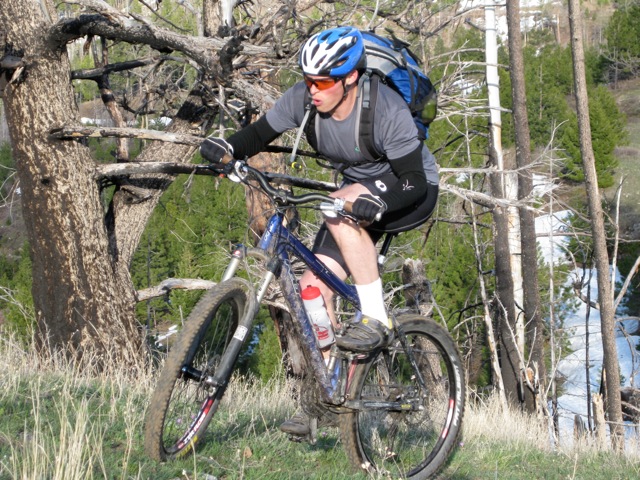 I think for quite a few us, Buttercup is one of our favorite nearby rides, and not because of it's fire road climb, but rather for the nearly 2500 vertical feet of buffed singletrack awaiting us. As I mentioned a little ways back the Mojo keeps delivering.  The helmet cam video I shot this year has other riders in it unlike in the past since,  as Stephanie had gently informed me,  I was slow.  I'm a little less slow, more like molasses than honey now, and occasionally I'm close enough to see how Eric, Brett and Warwick and the other downhill wonderkids approach their lines so that I can learn how they make it look so effortless. 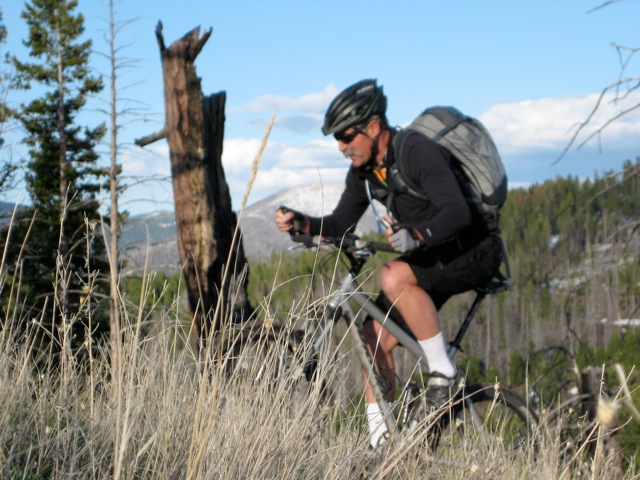 The good new was no one died on Mother Folker switchback.  Michael had vowed never to ride down Buttercup again after his last painful wreck and roll on the Mother Folker returned.  But then again he had vowed  in the past to never get married again.  When it comes to bikes and women, vows of "never again" expire about 24 hours later. For those who have never ridden down Buttercup, the last part of the trail crisscrosses down a steep open grass cover slope above Little Sleeping Child Creek. A mistake on the switchback will result in at least 10 - 15 feet of airborne fright before feet or other body part touch ground, and only Michael knows how far the roll will be before everything comes to a stop. 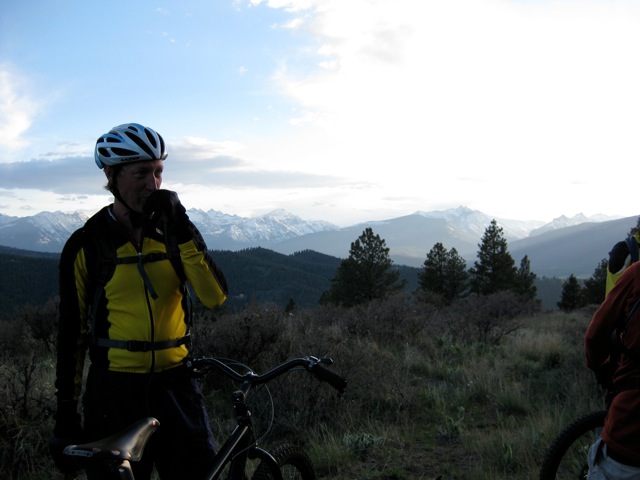 The much ballyhooed after ride grilling continues strong, although there was a brief scare.  The Mustachioed one, the king of ADHD ,continued with his hyperactive ways rushing off back to the cars while the rest of us waited for everyone to make it down the hill.  He proceeded to abandon us, driving off before anyone else had  even reached the cars.  Since he is the usual grill master, there were momentary fears that w would be sans grill.  Luckily by the time we returned to the barn we had found backup two grills.
One of the things I enjoy about the social hour, besides the beer and grilled wild game, are the anecdotes about the other riders, usually those not present.   I heard about Las Vegas sex fetish conventions,  the game of boombox golf, "how to" couples sex tapes, hauling furniture from Darby to Hamilton on the back of a bike.  Actually, we usually just share the stories about the same two colorful characters.
Next week's ride is still in the air. Since Rapture is scheduled for 6:00 on Saturday May 21st we weren't sure there would anyone around for a ride. Then we realized who are we kidding,  none of us will be eligible for first class seating and early departure.

After a long absence I proud to announce a WTF prize winner.  We have discovered that someone who will remain nameless, but maybe not anonymous since he just returned from the Keys, was not out of his medications as I had previously thought, rather he was in a rush to get home and watch TV. Something about some magical bulls getting ready to face off against some thunderous mavericks in an East Coast versus West Coast hip hop figure skating showdown.  Hopefully LeBron drinking out of stanley's cup won't interfere with future rides.
The proprietor of the Red Barn came a close runner up, but at least he opened up the barn for our use and came out after the game was over.  Until the next ride I hope everyone has a big ring finger.

Posted by MonkeyDoo at 8:18 AM