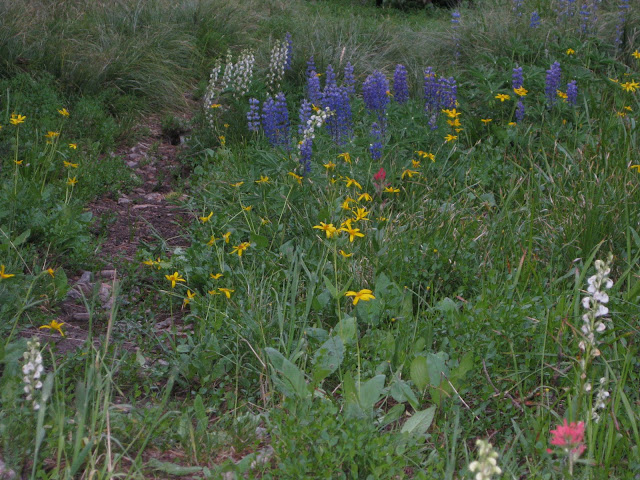 This week we had a secret weapon. With Eric and his elite troop of the Bitterroot Cackcountry Tree Service on leave, Ventana Jeff had to serve as this weeks commando and in a feat that would make Peter Graves (or Tom Cruise if you for some irrational reason prefer him) proud he successfully cleared the ridge to Willow Creek Trail. 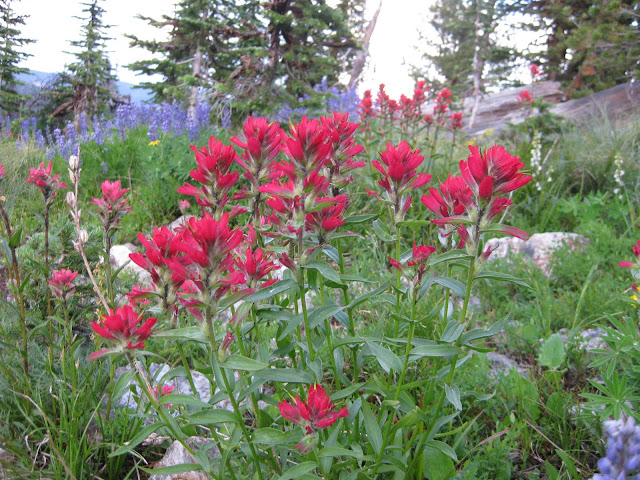 For once I planned to make it to the trailhead on time.  I prepacked everything and had the truck load and ready to go. I  planned to leave work early.  Unfortunately events at work conspired at the last moment to delay me and keep me tardy streak alive, luckily for Chris.  If I had been on time Chris might still be wandering the Sapphire between Stevi and Corvallis trying to find the trail.  He had already made one wrong turn just getting to the trailhead and his GPS wouldn't have served much use since this was his virgin ride to Palisdades, and the lead group took the shortcut which we luckily took, too.  The Flying Spaghetti Monster works in mysterious ways. 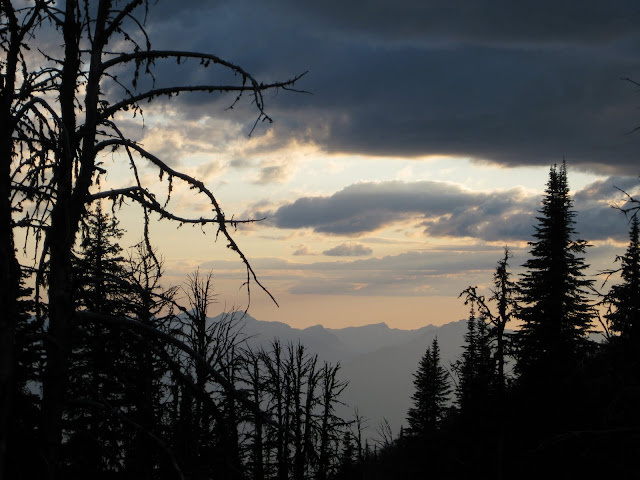 The Flying Spaghetti monster was beneficent in other ways. Clouds shielded us from the sun on the south facing slopes and a brief shower helped keep us cool and also slowed the lead group long enough for Chris and I to catch up making this a true group ride up and down.The ever present snow field on the ridge was still there, but had melted off the trail since Sunday. 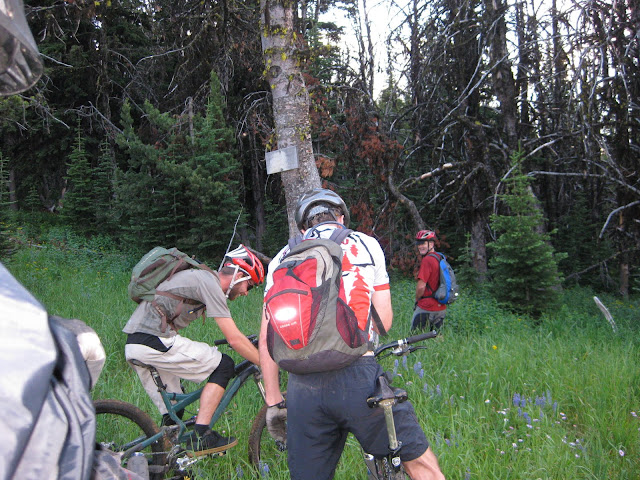 Above 8,000 ft everything is a little different. Evenings are chilly, even in August.  Flowers that had faded away at lower elevation are in full riot. Mosquitos are ever present even in the midst of last year's burn. I had hoped that one benefit of the Dominic fire would be a decreased in number of the tiny vampires that hang out beneath the Willow Mountain Lookout. Such was not the case. While the trees were toast, the blood suckers returned.  You might have noticed the lack of action shots and the nature shots in their stead. The little beasts were stalking the ridge as usual and no one was about to stop and wait.

With Jeff's much appreciated trail clearing and this year's abundant moisture, the ridge was faster and more enjoyable than ever. Doing the short cut on the climb saved us 2 miles of climb so it was only 11 miles of road for 6 miles of trail.  I was reminded again why this probably the premier trail close to town.  Fun rolling single track on the ridge.  Fast descents through the upper meadows. Just enough gnar on the technical mid section and a fast bottom with options for safe air.

The trail beyond Jeff's impossible mission has a fair number of downed trees that need to be cleared. Not so many that the flow was ruined, but enough that someone needs to get in their before more trees fall or someone's head get smacked by a leaner. So if anyone could sweet talk the Forest Service, like maybe while roasting some chiles at the Farmer's market, into sending a crew there it would be much appreciated. Otherwise we will eventually need to shuttle some chainsaws in.

Miraculously we make it out with the onset of nightfall. Beer and grilling were enjoyed by all.  Next week back to Buckhorn Saddle for a repeat, but this time snow free ride.

Posted by MonkeyDoo at 3:30 PM