In the annals of misadventures known colloquially as the Wednesday Night ride, there are certain rides that live on in infamy, and whether last night adventure will ever rise or rather fall to the depths of those memorable rides, only time well tell whether last night's ride will be told in the same breath as other escapades as Frog Hollow and the cabin of  Expired SpagettiOs, the Midnight Right of Bald Top, or the Bloody Glove and the Inner Tube of Salvation.

While darkness was involved, no projectile vomiting or bodily injury was reported.  Reflecting on the epics from the past I was struck by the frequency that either Bald Top or the trail it shares a drainage with Sleeping Child was involved. Even last year when I had the dubious honor of winning the FI award resulted from a wrong turn while trying to find yesterday's object of desire.

Earlier in the week there was a vigorous debate on the merits of mounting as expedition to Palisades versus Divide Creek.  No one had been on either trail yet and any knowledge of trail conditions was sorely lacking.  Eventually we obtained some beta that Sleeping Child Creek trail had been cleared. Information that turned out to be accurate if, as we discovered, incomplete.

Given the near debacle that was last year's adventure on this loop, I was surprised we managed to scrounge up 7 suckers  adventurous souls this time.  A few more, apparently those with more functional neurons, claimed they we going to ride came down with convenient emergencies.

The ride started in a routine fashion that didn't foreshadow the looming disaster.  The usual early risers with their ritalin deficiencies started promptly at 5:30. The rest of us a few minutes later. In retrospect I should have suspected that the aggregation of frozen water vapor that shielded us from the worst of the summer sun during the 10 miles  of dirt road was a tease to entice us past the point of no return. 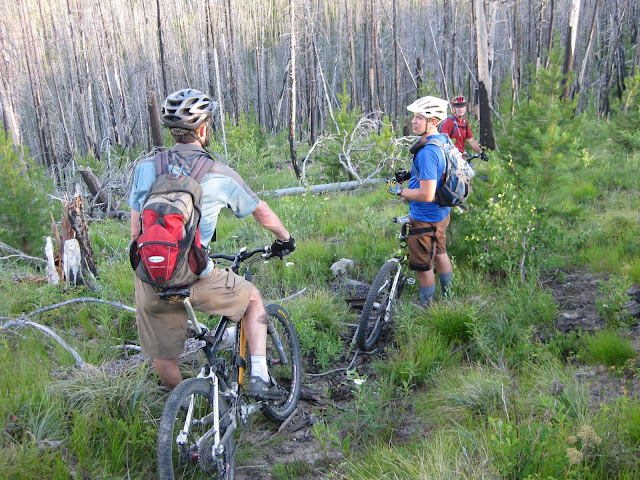 Not surprisingly we had some difficulty location the trail at the top, but eventually blundered onto it.  We expected some deadfall so we weren't alarmed that we spent more time walking than riding  on the initial section.  We were still making good time and most of decided to reprise our roles in the Bitterroot Backcountry Tree service and start clearing some trail.   Joel, in his unique style informed us of our foolhardiness and proceeded on down the trail and to the waiting beer. I can't be all that critical of Joel on this, after all in the end he was right, and he still had to deal with all the crap that was still awaiting us still he decided to try the trail this year rather than turning tail and returning down the road like he did last year. 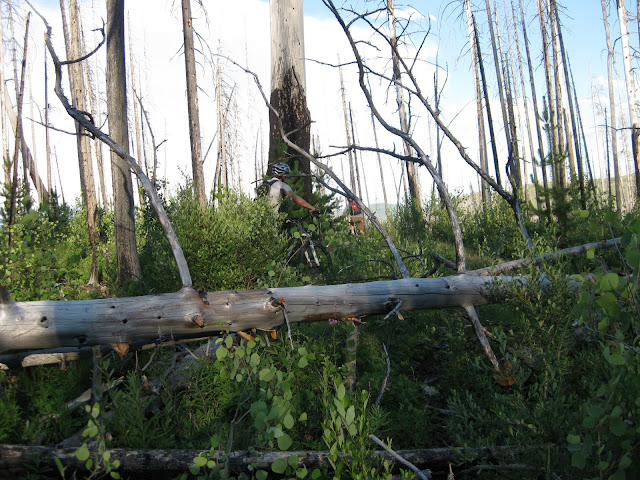 Eventually we cleared the a little over a half mile of trail from the first road cut down to Divide Creek. Using a modicum of judgement we decided to abort our efforts to clear any more trail and ride down the trail to the beer and brats.

It was just after this that the air was filled with a volley of invectives referencing, may she forgive me, the son of the blessed virgin, bodily waste, sexual intercourse, and oddly enough bananas. The way forward was a morass of deadfall obscuring the trail for an unknown distance.

Somewhere during the clambering over, around, or under the charred remains of the 2000 fires I had a vision of the personification of the trail. She was dressed in latex, hip high stilettos and a riding crop.  I was wearing a dog collar and leash. I had to submit and be prepared for degradation and humiliation.  The trail was telling me her name. Henceforth the White Stallion/Divide Creek/Sleeping child loop shall have a moniker befitting her status. I hereby deem the loop: Dominatrix.  By the time we staggered onto to Sleeping Child Creek trail, cleared as promised, my eyes were burning from sweat. my legs were bloody from some pungi sticks hidden in the downfall and I was approaching a near total bonking. 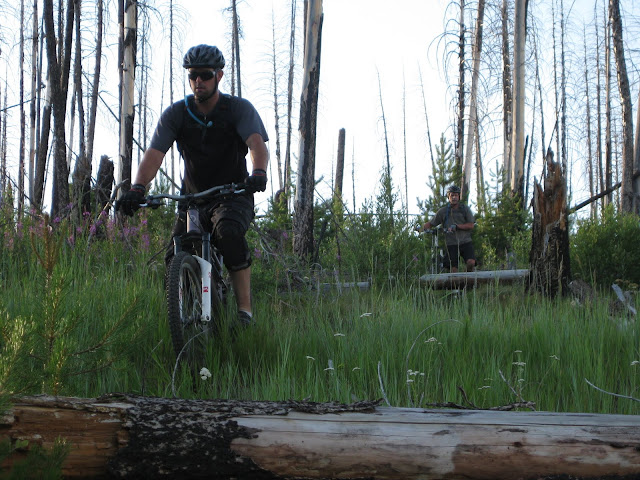 After a much too brief respite it was time to race impending darkness on the remaining 4 miles of trail.  Not too far along the finally clear trail, I found myself lying on my back in the brambles on the edge of the trail with my bike on top of me and thinking how comfortable it felt to be lying down and maybe I should just stay there on that comfortable bed of raspberries and thimbleberries and take a snoozer.

I had everyone else had out while I took some time to drain my camelback and come back to my senses. Eventually I remounted my bike for the ride and took a relaxed pace until I recovered.  With a mile or two left I finally felt energized and ready to take on the rocks and roots of Sleeping Child. Unfortunately for me darkness had won race and the last of the daylight was gone.  Luckily I have learned from past mistakes and I had the niterider with me to light up the path out, and found my way out only 10 or 15 minutes behind everyone else.

Last week while touring around B.C. for some hiking and biking I found myself in the town of Kaslo and some ceramic Beer Steins emblazoned with Kaslo Sufferfest 2011.  So if anyone is still interested in a weekend of abuse block out the first weekend of October.

As if there is any shred of doubt about the sanity of judgement of the crew, next week's potential ride is Palisades. Another trail known for long Forest Service Rd climbs, downfall, and no credible information as to whether it has been cleared.

Despite my better judgement I'm including the map here merely for curiosity sake, not because I want anyone else to repeat our mistakes. Just ride up Sleeping Child Creek from the trailhead for a technical out and back.