After last week Soft Rock wilderness adventure warmup, our return to Coyote Coulee felt like the return to the familiar embrace of a well worn pair of lycra tights on top of a broken in Brooks saddle.  Riding Coyote Coulee is usually the official start of the season.  We may get a few rides in before that, but they are more like the preseason, loosening up the joints, get the blood moving and trying to remember when the last time the chain was lubed or the tires were inflated.  I have been informed that I'm expected to once again use our bike rides as a tool to ponder the existential dilemmas of life, or failing that at least try for a modicum of humor, or if still failing post some photos of hot riders. 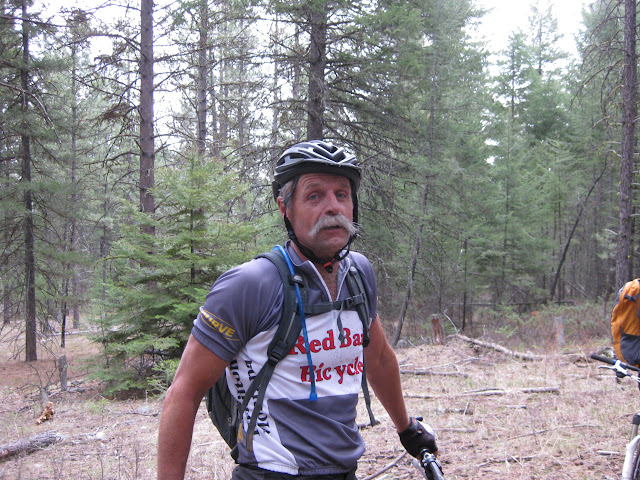 With everyone back from their Utah adventures, nearly the whole crew eventually arrived.  Every stop some else appeared at the end of the line, out of breath after trying to catch up from their late start. While for the most we fell back into a smooth big ring pedal stroke, there we still some early season stiff links in the chain to unkink.  New bikes for some, some of use older and slower, some of us older and stronger, some of us fat from a winter or two off the bike, some of us tanned from a month in the Grand Canyon, some of us new, and some of us hungover, we needed to sort ourselves out and jockey for spots in the lineup. 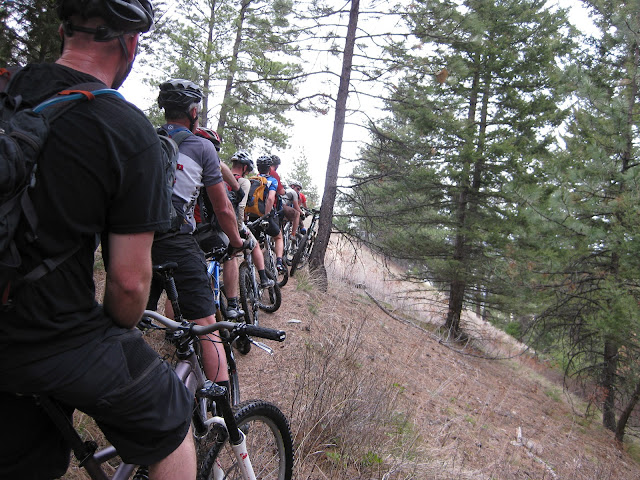 Quite a few new bikes made their debut yesterday, actually the same bike under four different riders.  A slew of shiny dent free grey Turner 5-spots were present making the 5-spot the preferred Wednesday night bike, taking over spot from Ventana. 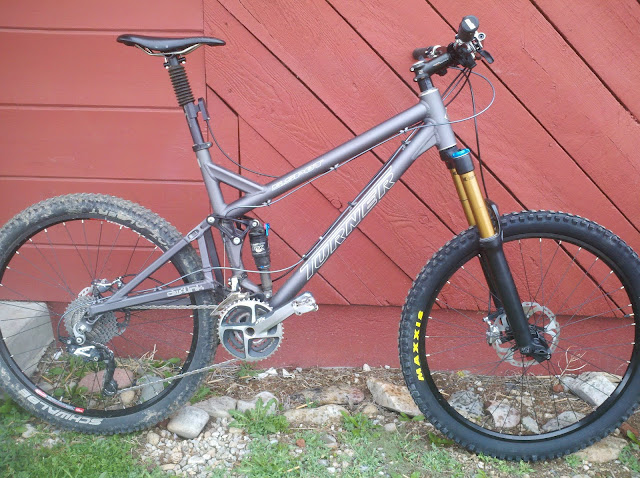 And now a few moments to mourn the passing of the Turner DW-link RFX.  Apparently the dream bike for the Bitterroot will never be built.  Instead Dave Turner says be like Chad, Rob, Eric and Joel, and get a 5-spot:

"After multiple iterations and tens of thousands of dollars, the bike rode like a champ, but it was aborted. By the time we got the prices quoted a year ago it became a big financial No F’ing Way. So we spent a great deal of time getting it to the point where it was reasonable. We were pursuing it even after this year’s trade show, through this fall. We went back and got the price more reasonable…but at the end of the day, it’s an expensive bike for thrashers. We’re talking a $2,500 to $2,700 frame price, for a bike someone’s going to throw in the back of a shuttle truck and thrash on? That’s just not going to happen, they’re going to buy a Kona. We are a niche company and a niche market for sure, but we still have manufacturing hurdles.
But this is the truth: the latest-generation 5.Spot, with a 67.7 degree headtube angle and a BB that sits just under 13.5 [unweighted] is superior to any of the RFXs ever built. Most of the guys who wanted an RFX can ride a 5.Spot with a 36 or a Lyric and they won’t be missing anything. I get emails all the time from people who have “over-forked,” saying they had no idea [the 5.Spot] was so capable. We’ve fully condoned it."

Yesterday's glorious warmth was a stark contrast from last year's Coulee Ride and had everyone in the mood to ride and ride hard.  It was warm enough for me to forget last years soggy socks and frozen toes and ride the stream crossings rather than wuss out for the bridges. What a difference a year and one week makes.

"I can only surmise that the only reason we were out yesterday is because we are as crazy as a ball of rattlesnakes coming out of hibernation motherfuckers.  I would also say we are as tough as nails, but one of was reduced to a whimpering schoolgirl as his feet unfroze under the heater of Joe's ForeRunner, several including a whiskey and firewood deficient kiwi skeedaddled before we grilled.  Yet, at least seven of us hung around to drink beer and grill our processed meats.  Jeff's antelope was supremely tasty."

"Rode Coyote Coulee yesterday. The west limb of the first loop (Hayes Creek) still had a lot of fairly deep snow. The eastern limb and the far loop (Brown Jug?) are nearly snow free except for 2 or 3 small patches and is very rideable." 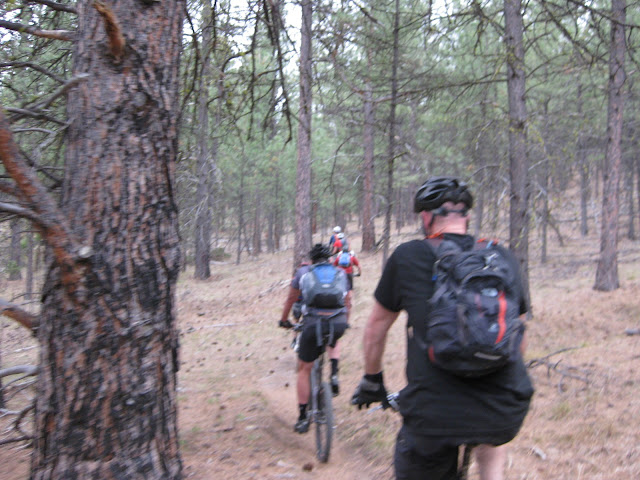 
Once we finished the Brown Jug loop there was a clamoring to add more mileage, and most of us opted to turn around and go look for the mystery third Moonshine loop. 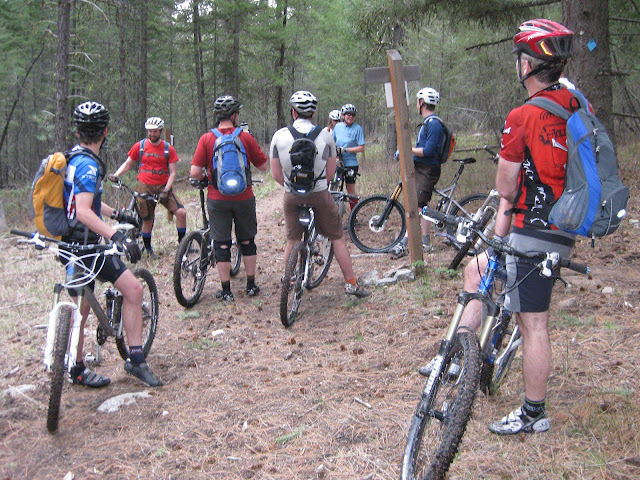 It was around this time that the renowned wheel builder and proprietor of Red Barn Bicycles,  got separated from the group and ended up all by his lonesome lost in the hinterlands of the Brown Jug.  All this time, and I never knew that his last name had a silent "S" at the end.  Luckily he wandered in with the last of the group just as grills we being fired up. That's right, grills. We had three of the buggers lit up and stuffed with lum. 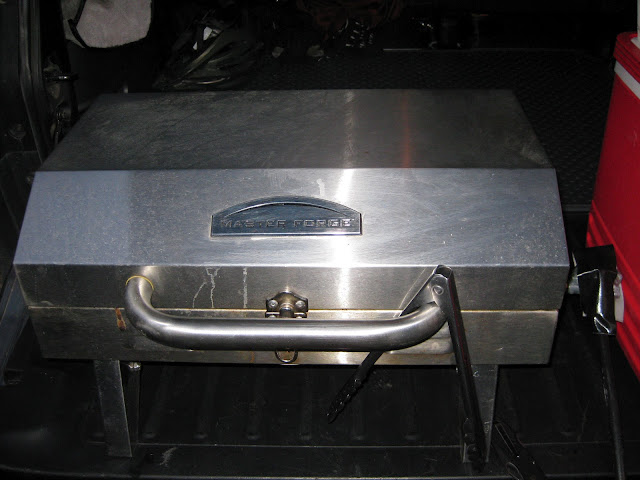 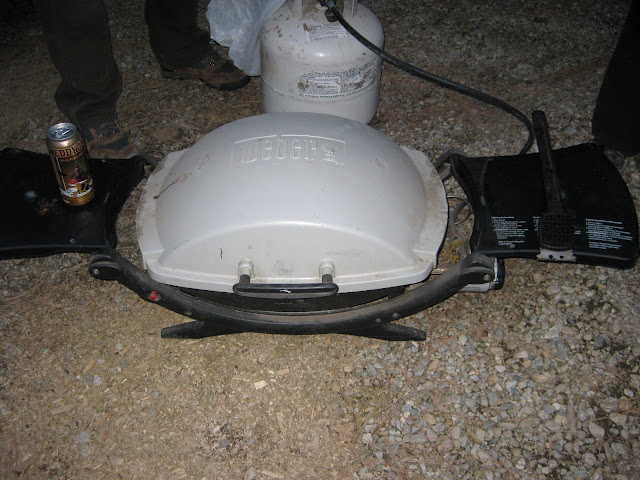 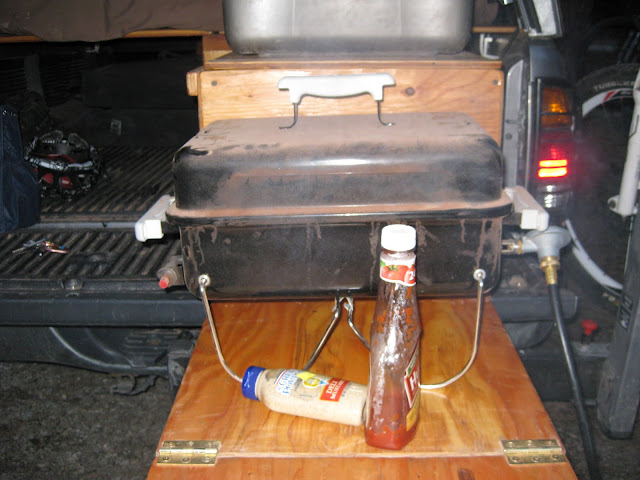 Sometimes I wonder whether the riding, the beer, or the grilling is the main reason for our Wednesday night gatherings.

Posted by MonkeyDoo at 1:38 PM