I'm still not sure when it happened, but sometime in the last 3 months I lost any level of fitness I had, and now I move about as fast a koala bear.  While sloths have a reputation for their sloth, koalas make them look like veritable type A workaholics.  Koalas sleep 20 hours a day and the rest of the day they spend stoned on eucalyptus leaves.  Somehow since September between the packing and moving, and moving and unpacking, basically life getting in the way of any weekend jaunts I was reduced to climbing hills about as well as a VW bug with bad spark plugs and blown head gasket. Even the middling climbs of Coyote Coulee had me gasping for air, for chrissake this was
Coyote Coulee, one of our easy rides, and I cold barely spin the pedals faster than a Bose–Einstein condensate locked in a laser trap. 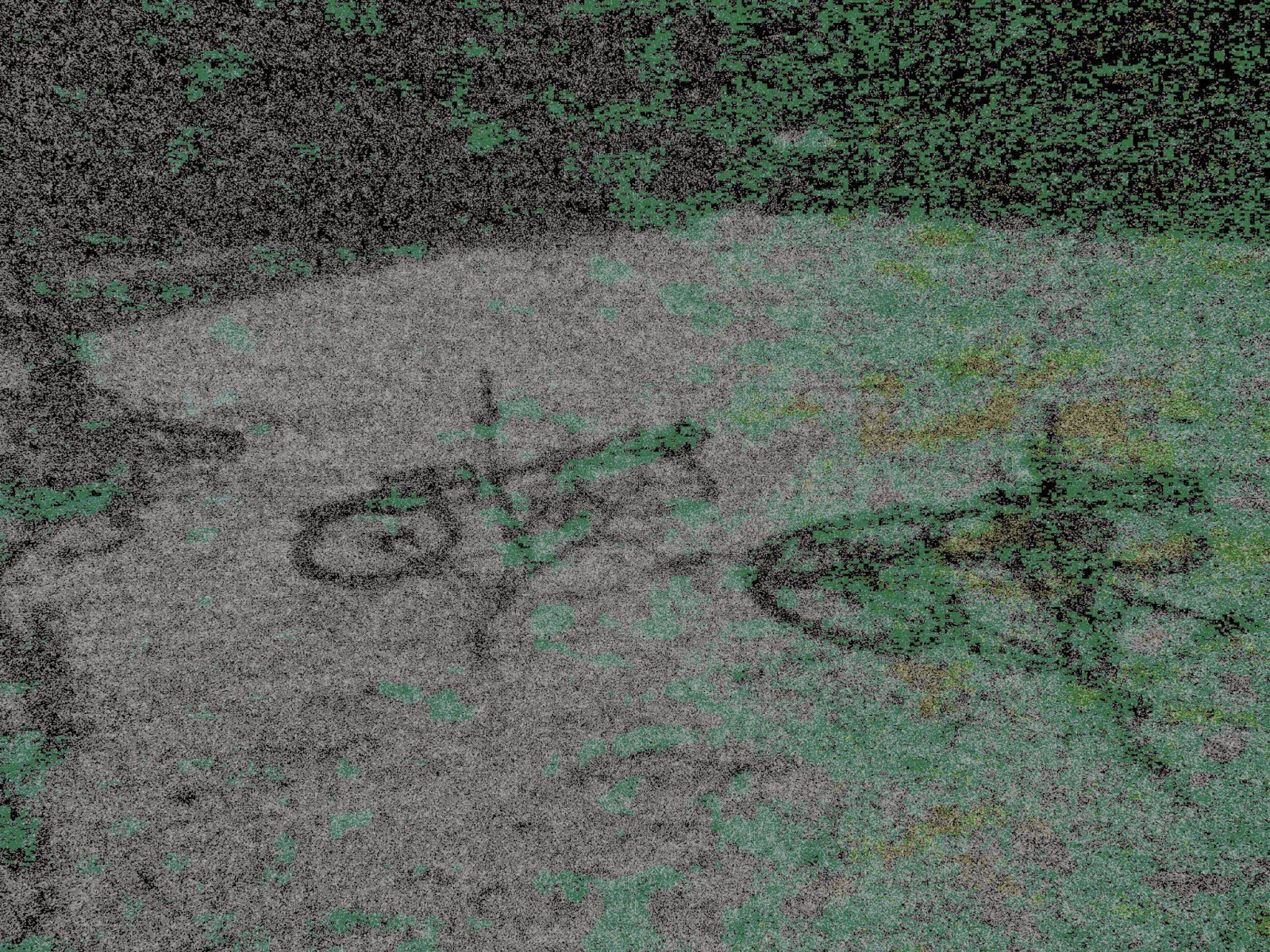 Enough of the whine, whine, whine we already know you were weak, I know you are all thinking. What we want to know is; how was the ride? 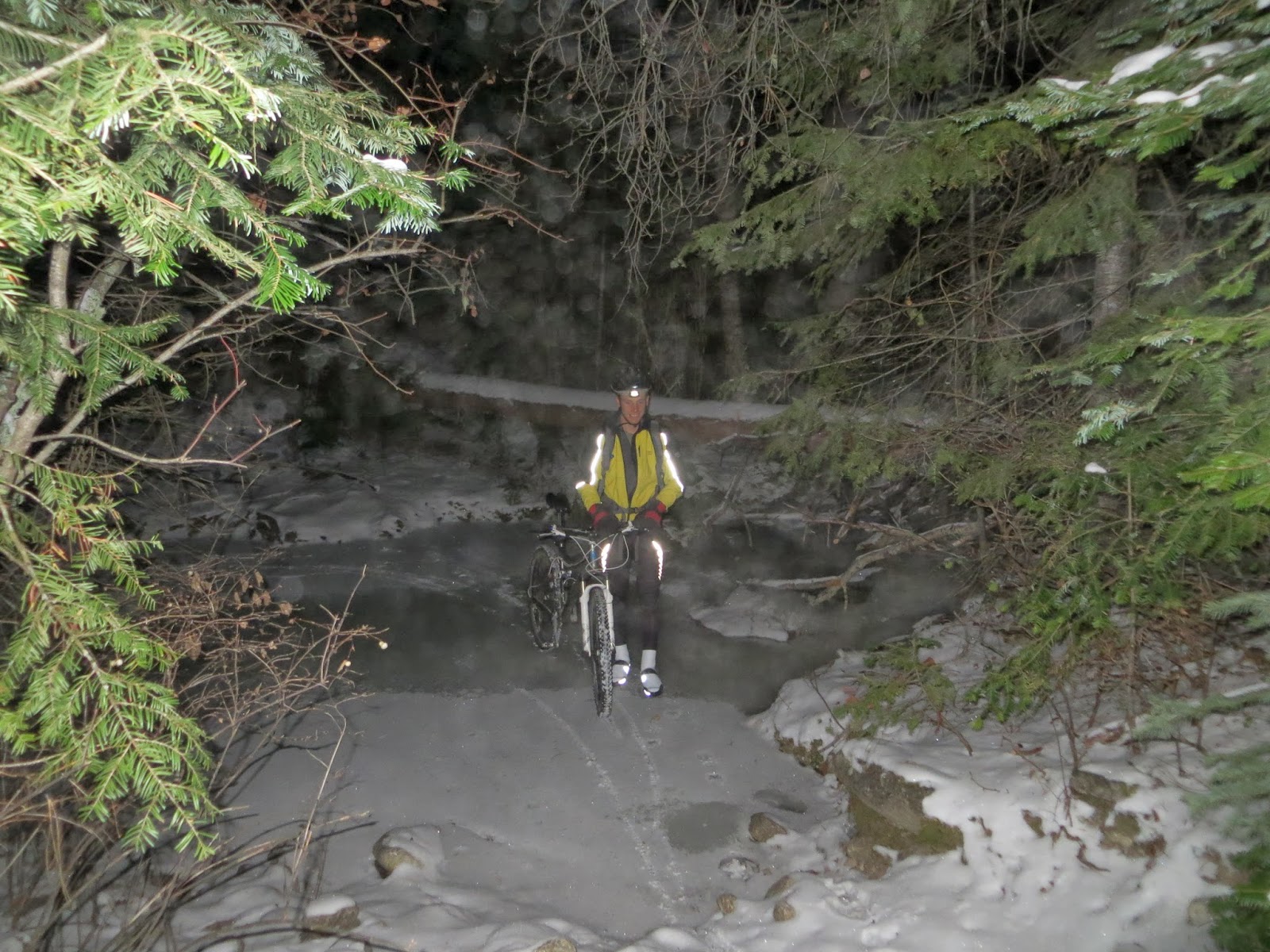 Well, the sun sets a wee bit earlier this time of year, so it was dark before we ever started.  A couple of inches of snow covered the trail, hiding smaller rocks and greasing the water bars. The water crossings were frozen solid, keeping our feet dry.  Even in my weakened state I was amazed how just a little snow makes climbs more challenging and descents interesting at any speed. 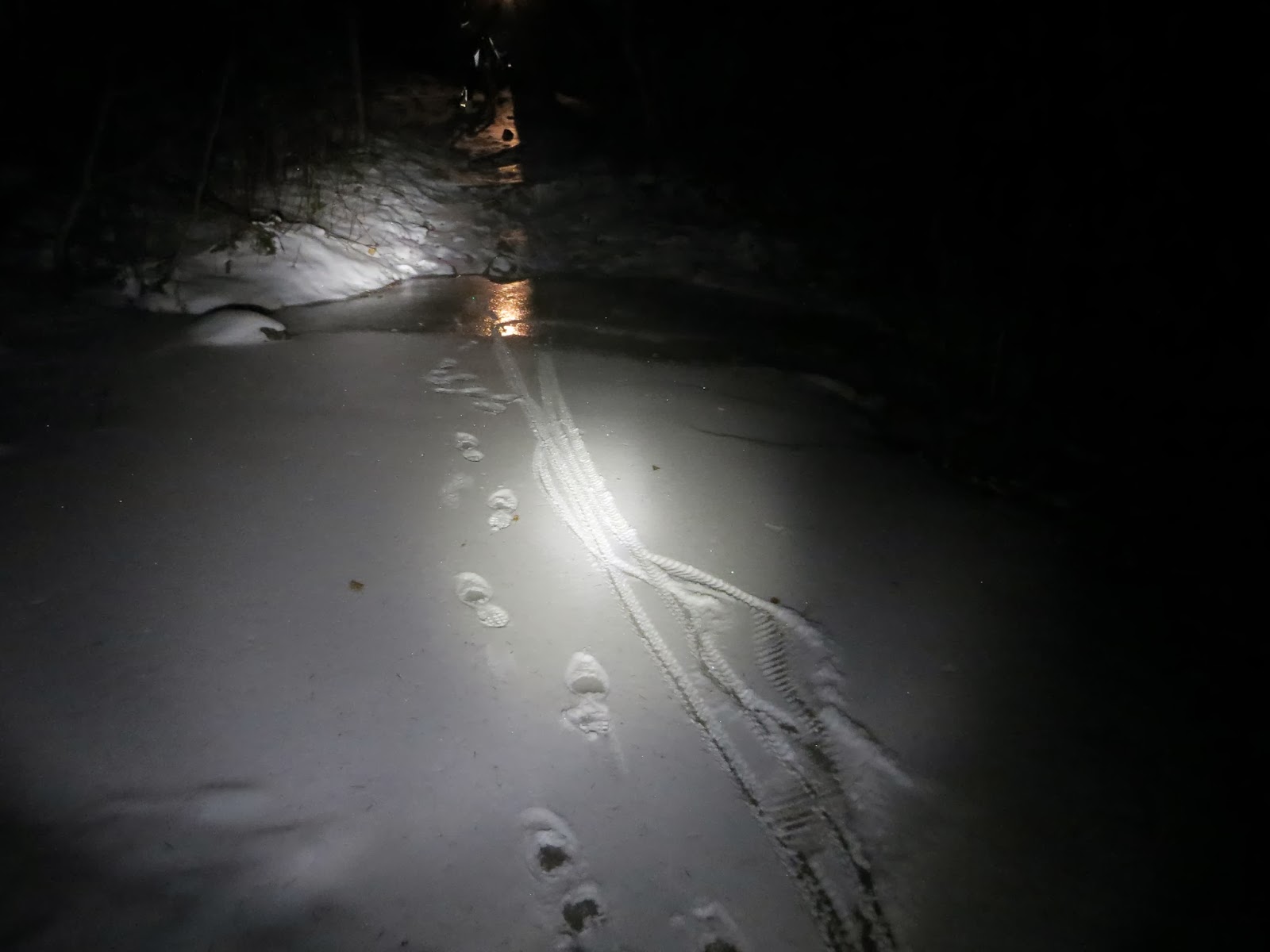 I was reminded that as much as I like lights mounters on the handlebar, a helmet mounted light would be preferable on the turns. As it happens there are some sweet 1200 lumen lights for sale at the barn, just in case anyone is looking to get me a Christmas present. Even with lights the ride still had that ride by braille feel and guess where the rocks and roots were hidden in the gloom or buried under  the thin layer of snow. 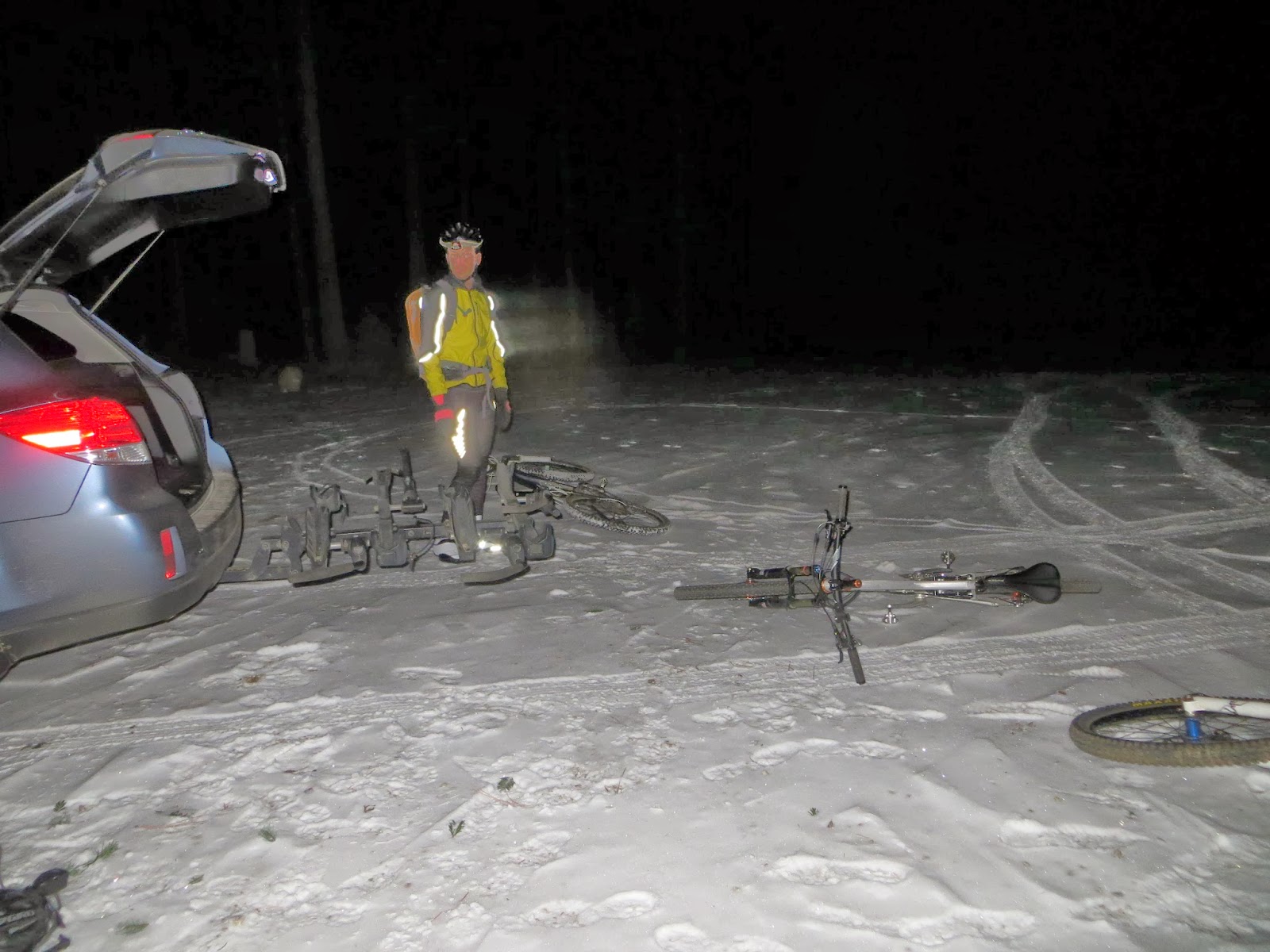 I guess most everyone else must have had holidays parties to attend, since I simply can't believe that everyone else wussed out preferring the hamster cages at the Canyons to the some crisp December fresh air. It's not like it was cold out, just barely below freezing. 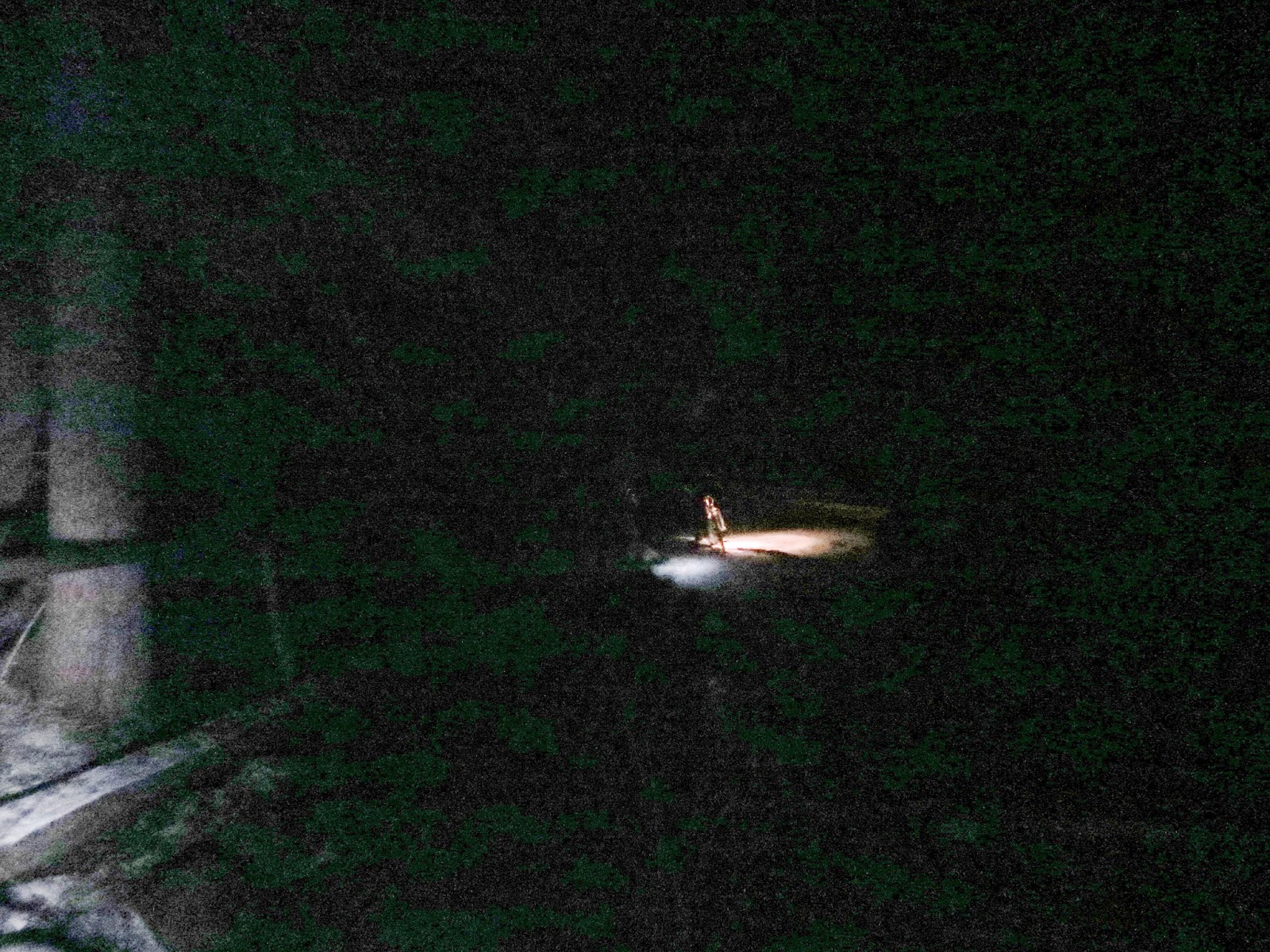 Many thanks to Jeff and Cory for not abandoning me deep in the woods.  It was always heartening to see the occasional reflections of light bouncing off reflective pants and coats in the distance, instead of glowing eyeballs.

I'm not sure how many more winter ride we plan, but the week before full moon's seems to have the best chance at light, even if the forest blocks most of the moonlight.  If we are lucky future rides will be fat bike territory.
Posted by MonkeyDoo at 3:05 PM