Some of you might recall this photo of my hand from a previous ride report and a discussion on the prenatal effects of testosterone on finger length. 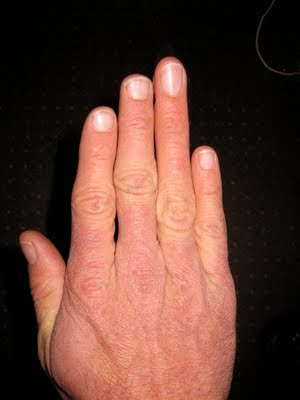 Well some urologists in South Korea decided to see if finger lengths were associated with increased size in other body parts.  First they measured the ratio of the length index finger to the ringer finger (L[i]/L[r]).  For some reason they avoided the middle finger. Maybe flipping someone the bird means something different in Asia. Then after being anesthetized for surgery they decided to see how much they could stretch the unconscious patient's Johnson, or in Korea their Chaci. The assumption being the more the snake could they longer it would be when tumescent.  What they discover was that at least for Korean men the longer your ring finger is relative to index finger the more the wang can be stretch.  My interpretation of this study is; don't go to Gachon Hospital for surgery on your pride and joy.

If anyone is interested I'll talk to our local urologist, Dr. Munding  to see if would be interested in repeating the study for the members of Wednesday Night Ride, and I could post the results here.

On a related note I went to fourth of July fireworks extravaganza at the home of another Wednesday night rider. During this celebration of pyromania our host was the unfortunate recipient of a direct impact to his family jewels from an errant projectile resulting in an acute increase in the size of his already impressive conjones, and incapacitating him for the rest of the evening. I tried to get him to let me take a photo of the damage, but he demurred. I guess he was afraid I might post it on Facebook or blog about it.

For those of us who avoided serious bodily damage over the weekend, a ride was in order, and for the third week in a row there were six of us riding.  Riding in small groups has certain advantages, one being that we don't forget anyone, and if there is a ever a debate about who should be in front we can just roll a single die to pick whose number is up. 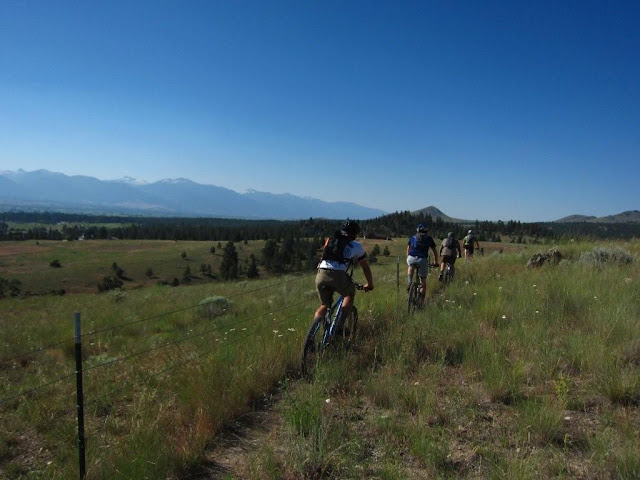 Starting the ride with temperatures at  90° and riding through the sand and sagebrush I had to question the sagacity of whoever suggested riding the exposed west facing slopes of Calf Creek in July, until I realized I was the sage.  Luckily I was modeling one of the new Wednesday night ride shirts, and this shirts made out of recycled coffee grounds kept me cool like I was hanging out at a cafe drinking an iced frappuccino. I don't do the Starbucks scene, so I've never had a frappuccino; I'm more of a Thai Iced Tea person, so it is possible that is how I felt,  especially if drinking one feels like an escaped scoop of whipped cream from the frappuccino melting on the sidewalk. Still the shirt felt comfy and has a loose, but not quite freeride loose, fit. There are two style one with a zipper and one more T shirt style.  The zippered coffee ground shirt will be $45 and the T shirt $30. Go and get one of each. Proceed will support IMBA and trail access. 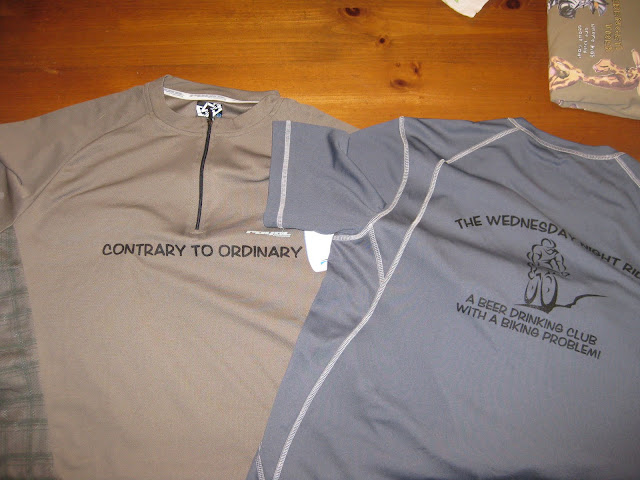 There have been a few complaints, which I can understand, that the bicycle logo doesn't so much resemble a mountain biker as much as a triathlete.  Personally, the logo reminds me of a triathlete, known locally as the Goldenboy who promised to ride again with us.  His impressive physique like the person on the logo would make Atlas envious, not shrug.  Several months have passed since he made his promise and if he is lucky, maybe he is being distracted by having a beautiful randy randian helping him create an impressive fountain from his head. 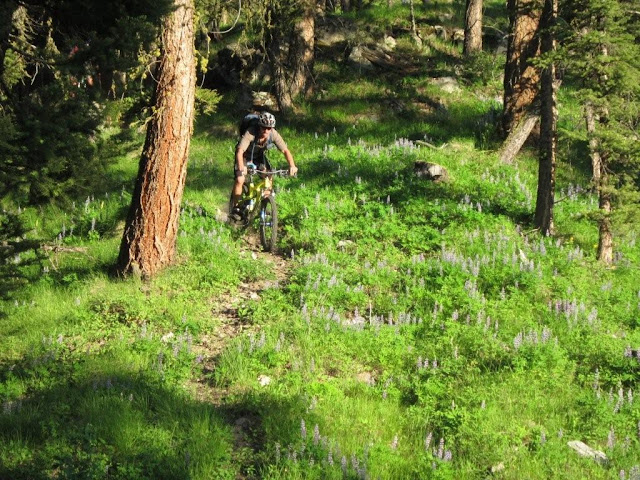 After reaching the top of the meadow, the trail enters the Ponderosa and follows more east and north facing slopes with a noticeable drop in temperature.  The moderate climate further back in hills created an atmosphere conducive to a pleasant rolling climb out of  Calf Creek and onto Butterfly Road, after the obligate clearing of the usual downfall. 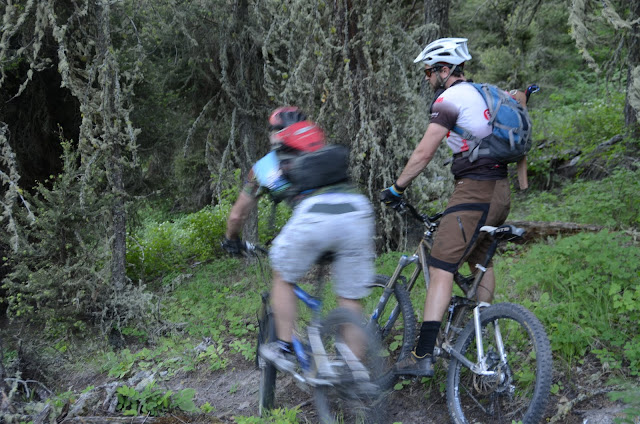 Once on Butterfly a Warwick of FS road lead us to the ridge above the southern boundary of Calf Creek.  There is always one moment on the dirt road that is always disheartening for me.  After rounding the first sub ridge the entire length of the remaining climb, 1.5 miles and 500 vertical feet, taunts you across the intervening drainage.

Dropping back off the road the trail disappears above a grass covered hillside where we still need to do a little work to connect to the trail coming up from below.  Riding down the grass hillside with the brakes locked and trying to connect marginally controlled two wheeled skids all I could think of was trying to avoid inadvertently stretching my manhood if got stuck in the saddle as I hung my butt over the rear wheel. 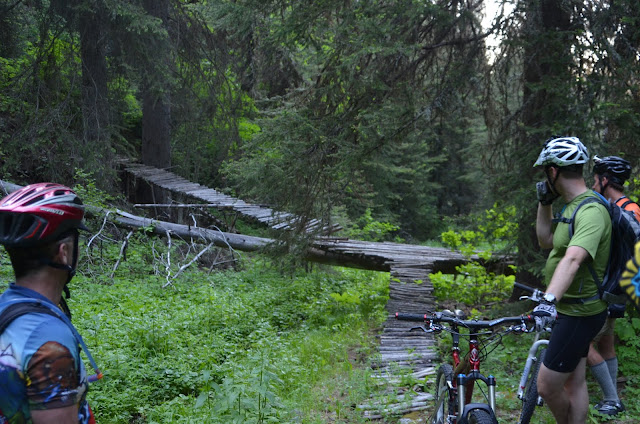 Quickly dropping in altitude we ended up at the only log works in the Bitterroot outside of Warwick's backyard.  These were built several years ago by some local teens, out in the darkest, most distant portion of Calf Creek beyond the reach of State and Federal officials who tore down previous attempts.
Unfortunately, the years since have not been kind and yesterday was the first time in years that anyone had put down some rubber on their weathered surfaces. Several logs had rotted away and  the nails are losing their fight with entropy. 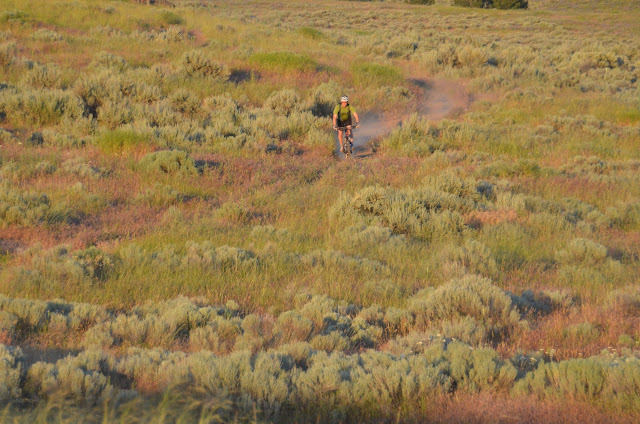 The remainder of the descent of was fast flowing non technical single track into the setting sun, with dust  blinding anyone following too closely behind. 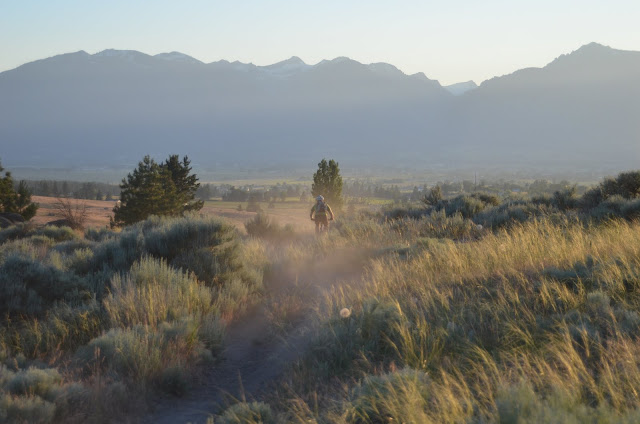 Back at the vehicles we discovered Dean loitering around having given up on his attempt to chase us down. I guess we did forget someone after all, and unless he had dug up a Polyhedral die from an old Dragons and Dungeons game we wouldn't have been able to roll to see who goes first. 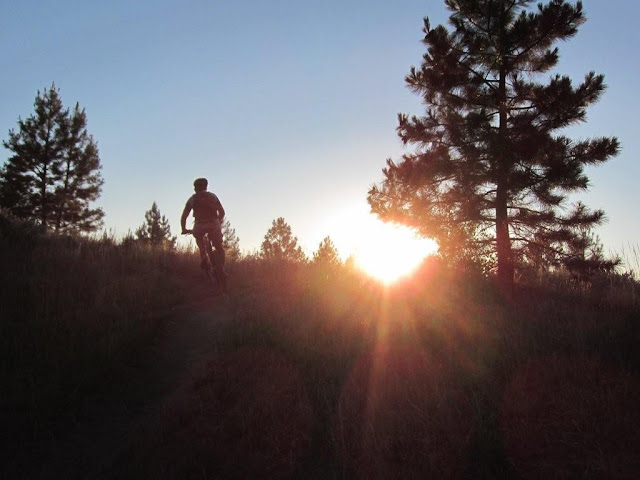 Once again we thanked Joel for his generosity in letting us use his grill and propane while he recreated up in the Great White North. 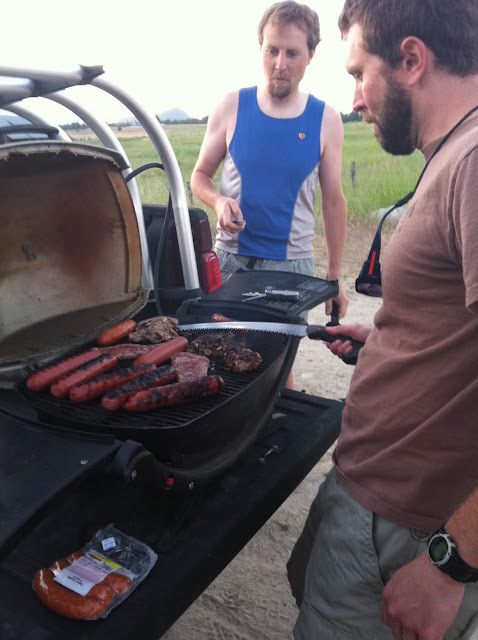 Big news for next week. First off the Wednesday night ride will be on Tuesday night.  We will meeting the Missoula Tea Baggers for High Tea on the slopes of Lolo Peak.  For those of us with jobs, it was too difficult to get up to Marshall Mountain for the Cross Country Series. The exact meeting time and spot on Hwy 12 is not yet set.

Posted by MonkeyDoo at 4:03 PM