Last week, after fasting and in consultation with the high council, the wizened and revered Grand Wopwop decreed that the second Wednesday of July for the year 2001 would occur on July 12 rather than July 13, and therefore anyone journeying to great rendezvous will not be sacrilegious by imbibing the sacramental fermented barley on a day other than the sabbath.

Freed from accusations of heresy, several of us ventured forth on a pilgrimage to Lolo Mountain and the annual Great Rendezvous where we would share in the celebration of the secret rites and sacred rituals shared by the brothers of the wheel.

The Tea Society of Missoula has succumbed to the vices of the big city and have developed a more decadent free ride mentality.  Only one of us, the newly shorn Eric with the smooth skin of an acolyte, followed the path of purity and chose the penitence of a nine mile climb to the end of Mormon Peak Road. While the rest of us succumbed to the temptations of hedonism, and allowed ourselves to be shuttled to the start of Lolo Peak trail in the backs of the jacked up jalopies of the tea baggers. 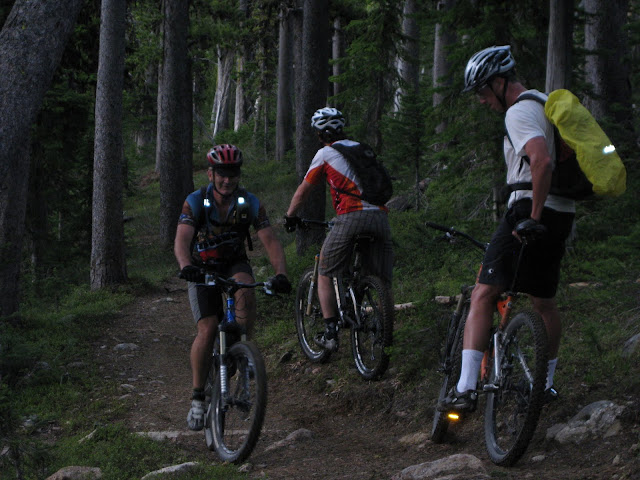 Eventually 23 of us formed a congregation at the trailhead.  Seven from the heart of the Bitterroot and sixteen from the glittering city to the north. The rigors of the trail soon separated us into smaller clusters as we ascended 2.5 miles and 1800 vertical feet until the  righteous displeasure of the gods at our vain apostacy. For breaking the great commandment,  Thou shalt earn you vertical," our path to the top of Carlton Ridge was repulsed by great drifts of snow in July about 600'  and an unknown number of switchbacks below the ridge top. A plague of mosquitoes was sent to torment our exposed skin. 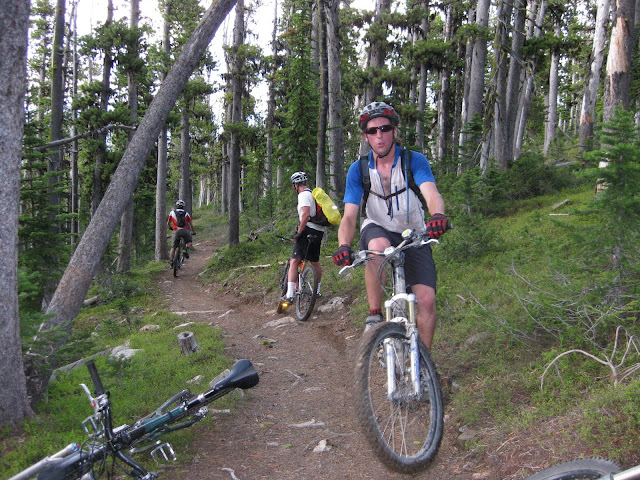 Despite their wrath, we could not be denied the pleasures of the descent. For those us raised on the rocks and roots of the Bitterroot, the trail came as a revelation. Fast and flowing singletrack with long sight lines and nary a rock or obstacle to slow us down,  the first 1.5 miles and 1200' of well buffed trail quickly disappeared beneath our wheels until we returned to the easy to miss fork with the Mill Creek trail.

A warning to those of the faith, the Lolo Peak trail is popular with the great unwashed masses being the main route to Carlton Lake and beyond to the tops of Lolo Peak. Riding this trail and hoping for a fast unencumbered descent might find their path to enlightenment blocked during those popular times known colloquially as "the Weekend."

At the fork I was reminded of the poem "The Road Not Take" by Frost. He had to choose which road to take, luckily we took both and turning down Mill Creek Trail we were on the road less travelled, and were rewarded with another 3000' of vertical. Whereas Lolo Peak trail feels like a highway. The trail less travelled was narrow and reminded my of the trails closer to home especially the rock gardens and tight switchback lower down. 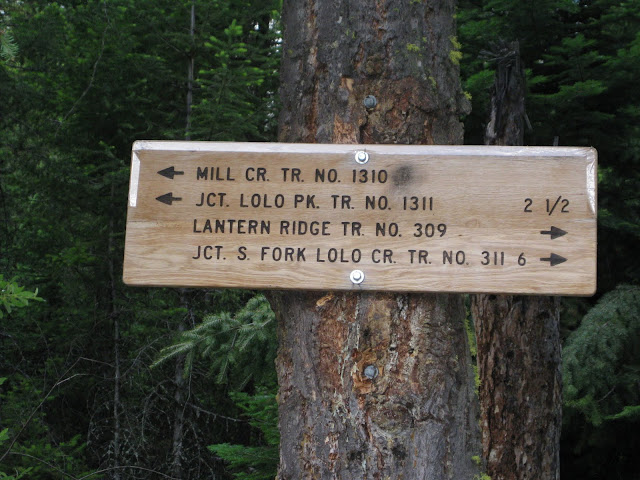 After regrouping most of wayward sheep at the junction with the Lantern Ridge Trail we opted to keep descending, and the trail became ever more faint as it crossed, followed and then dropped off a series of old logging roads, with at least one flat and one superman accompanying the final stretch of trail. 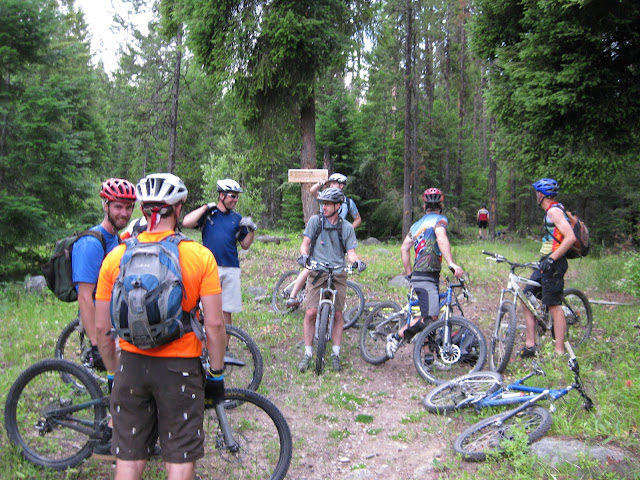 While the lords of nature had been benificent in allowing our glorious descent of over 4000', their fury had not ebbed and one more trial was in store.  While some were still reverently completing the trail, and the rest were attempting offerings of lum and hops, the skies opened up in retribution pelting our undeserving flesh with hail and lightening up the sky with bolts of fire, and reducing to our deserved status as cowering mutts. 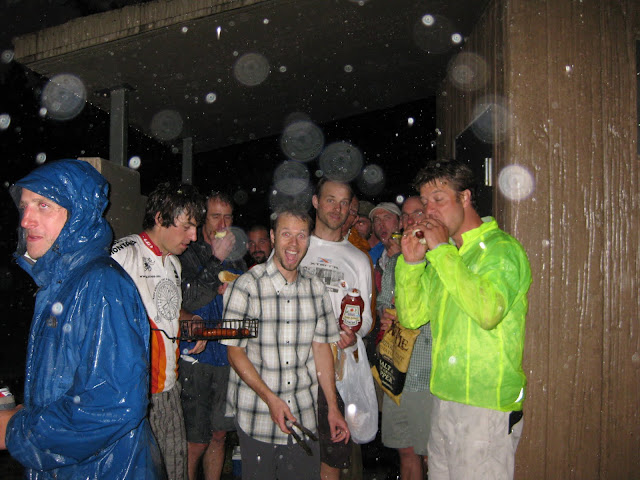 Despite the pools of water around the picnic tables, grills were fired up and sacramental fermented barley was consumed, except for those imbibing PBR in which case it was fermented rice and wheat.  Courtesy of the state we found refuge in the cozy surroundings of the covered porch of a small cottage. 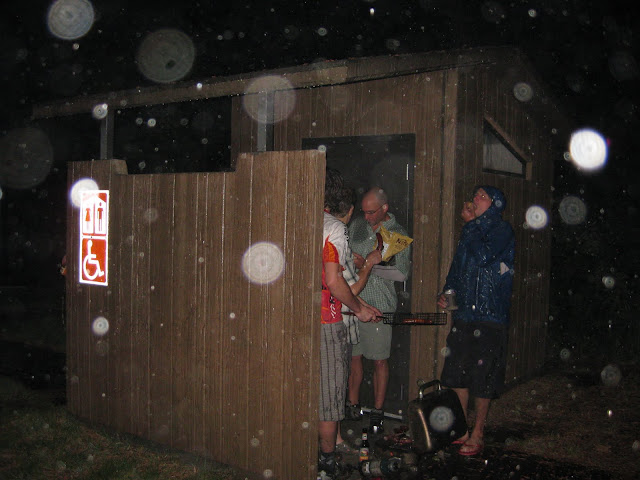 Once our revelry passed the allotted closing time of Fort Fizzle and our male entourage I was concerned we might get a visit from the state patrol concerned about the propriety of our activities. In due course the revelry abated with the return of the shuttled trucks and the imminent arrival of another tempest.

My helmet cam travails persist and no footage was present on the card when I returned home. In lieu, I have drawn a quick animation that reflects as closely as possible my recollection of the sublime trail that the Tea Baggers had the magnanimity to reveal to our undeserving collection of Bitterroot ruffians.

We returned home singing hosannas for the 11 miles of riding and over 4000' of divine trail we had the good fortune to descend.

Be prepared for penitence next week, as the ride will be to Camas Lake.