There was some big news this week. Scientists at the LHC in Switzerland discovered evidence for the existence of the Higgs Boson.  WTF does this have to do with mountain biking, quite a bit thank you.  It has been awhile since college physics for me, but from what I have been able to pice together the Higgs Boson acts as a quantum mechanical version of the gumbo that develops on Calf Creek after a heavy rain.  What does the gumbo do. It makes pedaling and moving harder.  The Higgs Boson when acting as a field works the same way.  It makes it harder for particles to move around, and we call that mass.  While climbing from Coyote Coulee I was extremely aware of mass, especially as the rest of group dropped me like a lizard drops it's tail as a decoy for predators.  Climbing the rocks on the Camas trail proper, that combination of mass and gravity we call weight eventually forced everybody, even the local supermen, off their bikes. 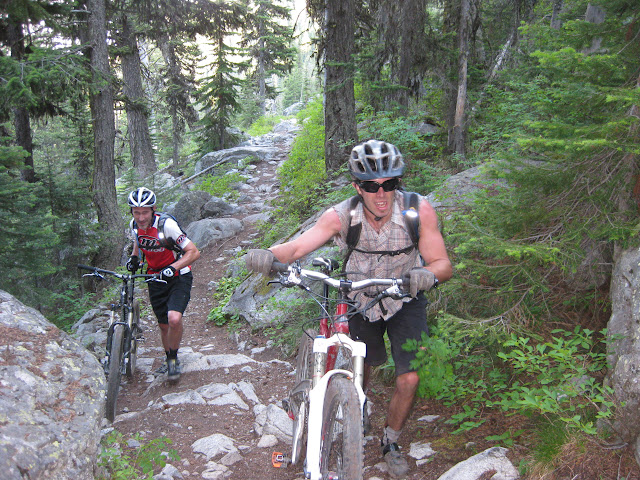 Trying to remember any fragments of my rudimentary understanding of quantum mechanics, and aided by my current reading of "The River Why,"  which like "Zen and Art of Motorcycle Maintanence" is less about the supposed topic, in this case fishing, than it is about, you guessed it connections; I was reminded that more important than the particles is the interactions between them.  In my last post I mentioned that I discovered that all the single women were in Moscow and how I might wander that direction in hopes of interacting with a feminine particle.  Before I left on the quest, I discovered that in my excitement, I didn't read the article quite closely enough,  the single women are in Moscow, Russia not Idaho.  It  wasn't a total waste; I ended up with a lifetime supply of NRS straps. 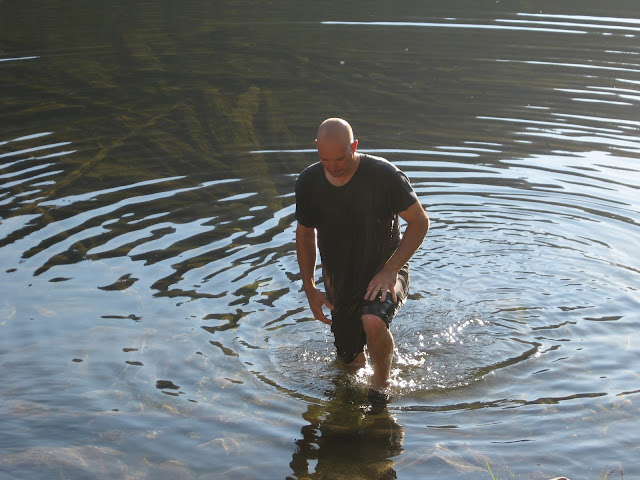 Sometimes when out riding I become cognizant of the myriad connections.  Such as the email announcing the ride. We are going to meet at Coyote Coulee and riding to Camas Lake.  The meeting point and the destination are to a degree irrelevant. What matters is the trail,  and what is a trail other than a connection.   Reaching the lake, baking from the photons from the sun, another connection with the water seemed crucial. 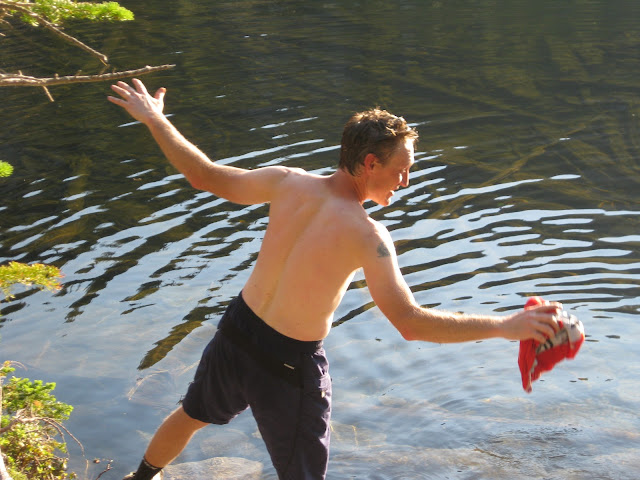 While riding up the trail, the residue of other interactions with my chainsaw litter the sides of the trail. Two weeks ago I heard rumors of atrocious unrideable conditions up Camas. With everyone out of town or otherwise occupied with pre 4th activities, or 40th birthday parties, I mounted a solo expedition up to the lake.  Three tanks of gas and the untold number of trees that had turned the trail into an obstacle course were gone, with only little piles of sawdust left behind.  I'm going to throw a plug in here for everyone to remind them to bring saws, especially handsaws when you have a group and you know there will be deadfall.  Even clearing a few trees can be a huge help, and makes the trails more fun for everyone. 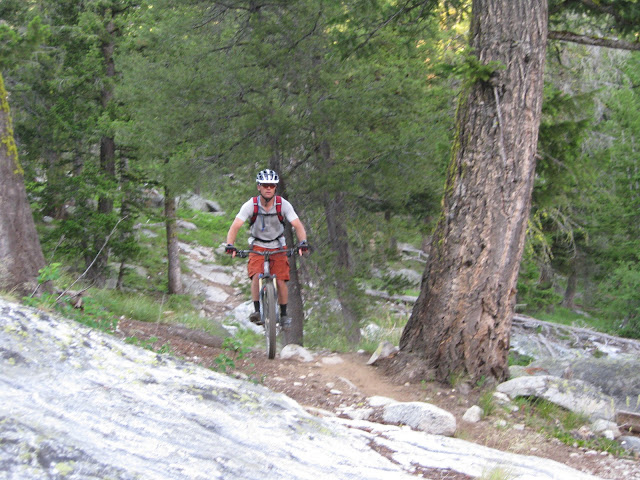 As we swatted the Mosquitos, I knew some would escape death and manage to get in for a suck, and next visit some of the new mosquitos harassing me might be carrying remnants of carbon, nitrogen, and oxygen that might have once been my blood.  Almost makes you wonder if killing them, is like killing your kin.  Furthermore, if a you catch a fish that ate the spawn of the bugger who went vampire on you, are you a cannibal? 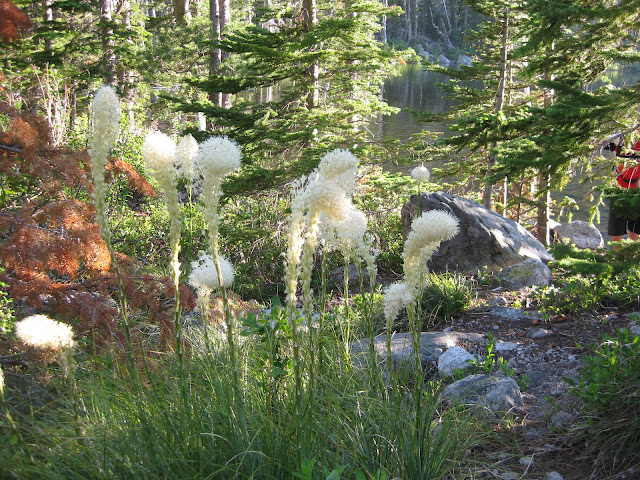 Other times when riding,  I notice a spot and remember that I wrecked there last year.  Now at that spot there is blooming beargrass. Or did take a piss there last year, either way plant food. 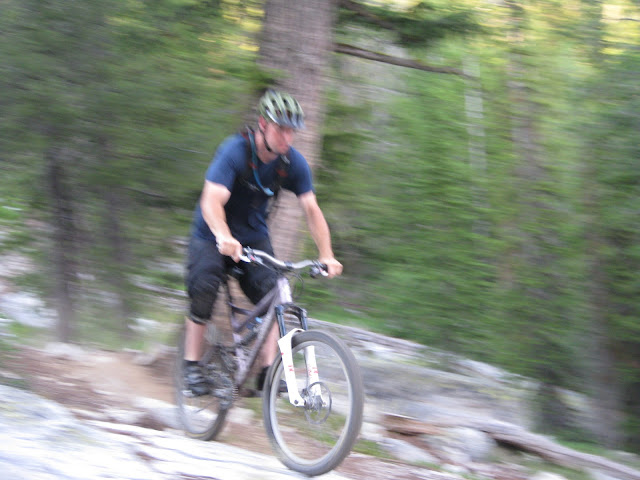 At other times, other connections, or their lack become apparent. Such as when a chain snaps.  Something that happened twice yesterday.  Sometime the rubber in a tube gets pinched and ceases to be connected to the rest of the tube.  All that is left is a hiss of the air escaping. 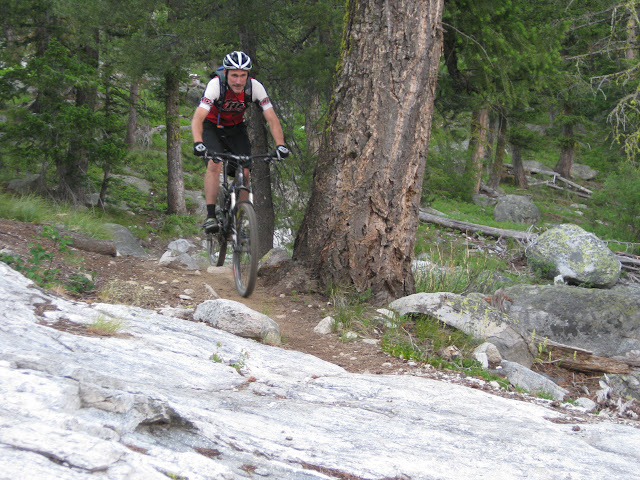 Of course group rides add another dimension of interconnectedness.  Chad's quick links end up on Bret and Eric's bikes.  One of Bret's links end up on Jeff's bike.  Inner tubes change hands. 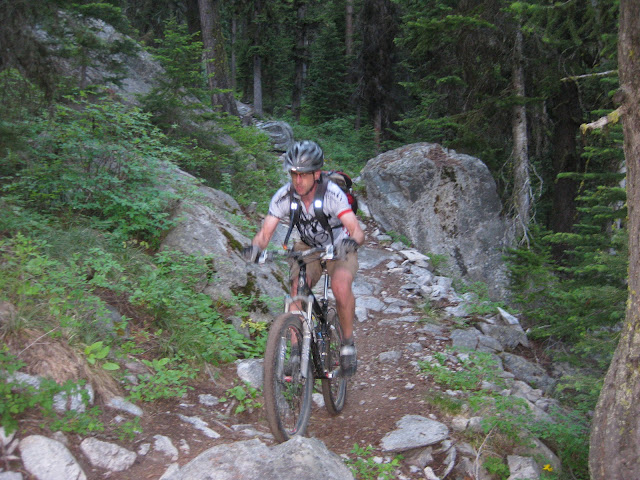 Then there is the serendipity that hints at hidden relationships.  If it weren't for falls and mechanicals I would never have had a chance to get far enough ahead to take photos. 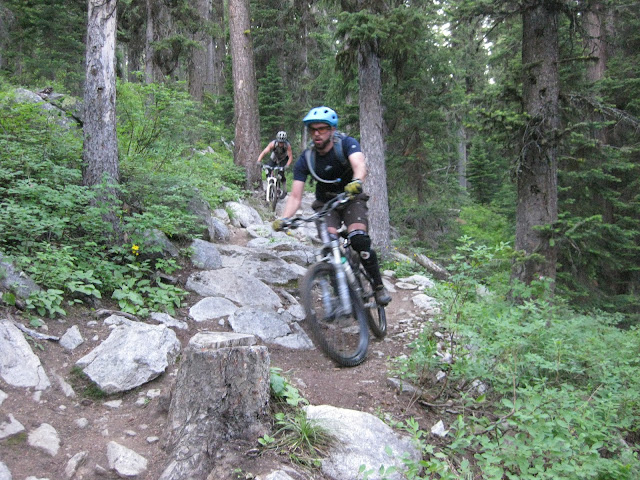 Before I get too far into the armchair, or is bike seat bull shitting philosophizing, I better relate some more about the ride.  Seven showed up.  Chad brought along a friend, weary from road tripping from Nebraska. He barely had time to shut off the engine and show off his new baby before he had to put on his chamois and throw his bike into the back of the truck.  I'm not sure if Chad is the best friend or the worst friend ever. 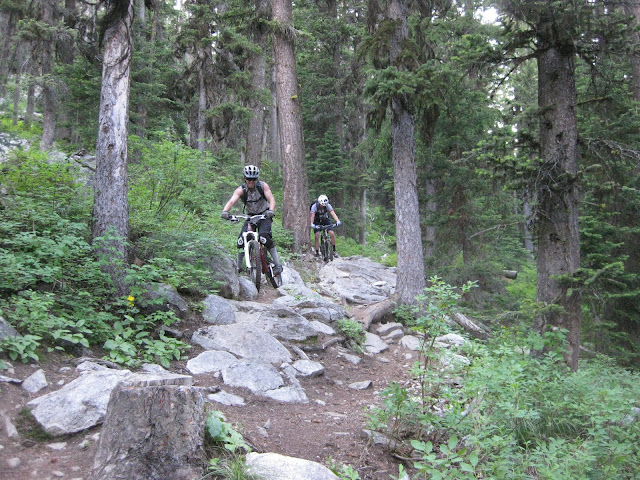 I have to agree with Jeff, with all the new younger sonabitches the rides are faster than they were in the past.  Even some of the older dogs are getting faster with Butte 50 training.  I even managed to clear the rock garden in these photos for the first time ever, on the third try. With the time we saved with the after riding we were able to add some distance to the ride.  It was only more switchback to the Lost Horse Overlook and a ATV trail down we were told.  Somehow no one mentioned how many Warwicks long the switchback was.  No maps, no GPS, no Strava segments for the new variant, just directions  After riding Camas, go back to road and head up and around the switchback until the road splits. Go left, check out the view, and then follow the trail down. 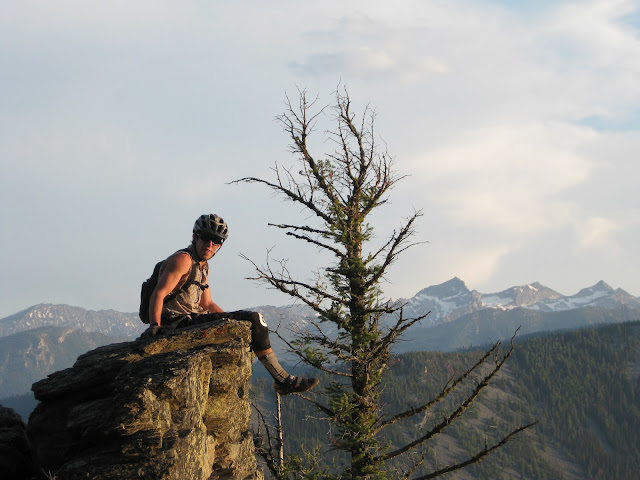 The ATV trail down was a skidilicious loose dirt playground.  Several us almost missed some tight turns obscured by the dust.  Without masks some of the dust was inevitably inhaled, and even now may be undergoing a granulomatous reaction in our lungs incorporating a permanent connection with the trail into our bodies. 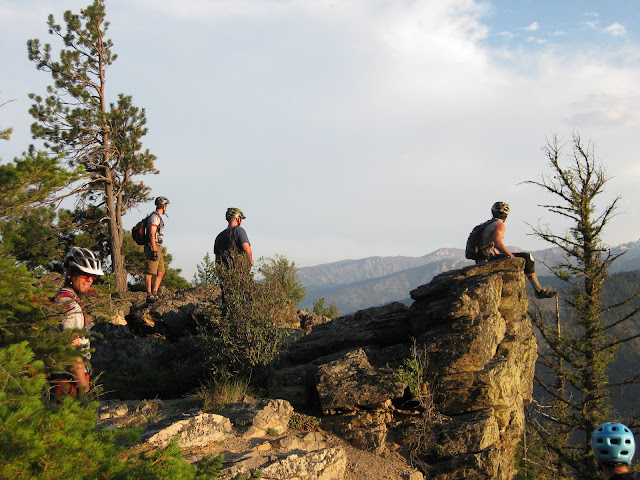 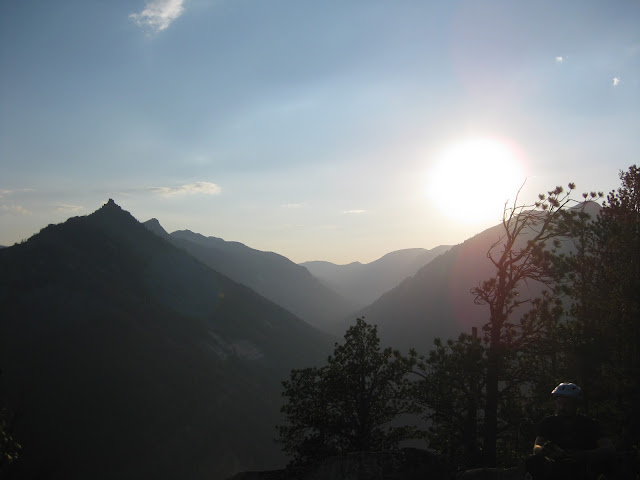 Special Edition of the Wednesday Night Ride next week. The Zootown Tea Baggers are coming down to interact with us along with riding Willow Creek and Palisades. In deference to their limited aerobic abilities, we plan to shuttle the road. Provided we can figure out a way to keep the bikes safely stowed on the road up.
Posted by MonkeyDoo at 1:54 PM