Taking a break from my relentless schedule of trying to turn my every thought into a clever tweet and posting comments on my wall, I discovered a whole new way to combine narcissism and vacuousness. I just discovered Strava.  For the fitness and Facebook obsessed this is a mainlining heroin fantasy. How this works is you can post your gps tracks and  race other people without the hassles of having to agree to a day or time or even needing to watch their chamois.

I figured this would appeal mostly top roadies or triathletes. Then I was reading the FatCyclist blog, and  he was boasting about his wife out there trying to claim her title as Queen of the Hill on several mountain bike trails around Salt Lake City and I realized that it must also appeal to that endurance fringe of mountain bikers who like things like the Butte 50 and the Park City Point to Point.

My first impression was like you know like whatever.  Then while pedaling up Ward yesterday I had one of those lightbulb moments, when I realized why my reaction to this new social web app was so blasé. I was at the back of our intimate crew of 5 and I was reminded that I don't need an app to remind me how incredibly ordinary I am. I'm routinely dropped on the climbs and I gave up filming with my helmet cam since I couldn't keep up with anyone worth watching on youtube. Sam Shultz I'm not, and if I was the last thing I would need is an app to remind how good a mountain biker I was.

I'm not opposed to competition. Every Wednesday is full of the testosterone addled, and at some level we are always measuring ourselves against each other.  Where should I be in the lineup?  Who do I want to be in front of going down?  I'm just not sure I want every ride to be a redlining competition.  I love to get on my bike and I hate the idea of having interval days and recovery days and long and slow days. I just want to go out have fun.  I do a few races every year like the Bitterroot Tri and the Butte 50 a few years ago and while I don't expect to win I still want to perform well.  In that way Strava kind of reminds me cyber sex.  You get a chance to get all sweaty while alone and it feels good, but it in the end it is still just masturbation.

While on that subject, I realize I haven't mentioned my social life in the last few posts, and no doubt everyone is salivating to know how the singles scene is.  I can report that I have found where the single women are. Moscow has 3 million single women between 25 and 50. That's like three times the population of all of Montana. I'm not entirely sure how this helps me.  I can't seem to find the time to go to Missoula.  On the other hand, it would be great excuse the checkout the main NRS store. Never knew there were that many women in Idaho. 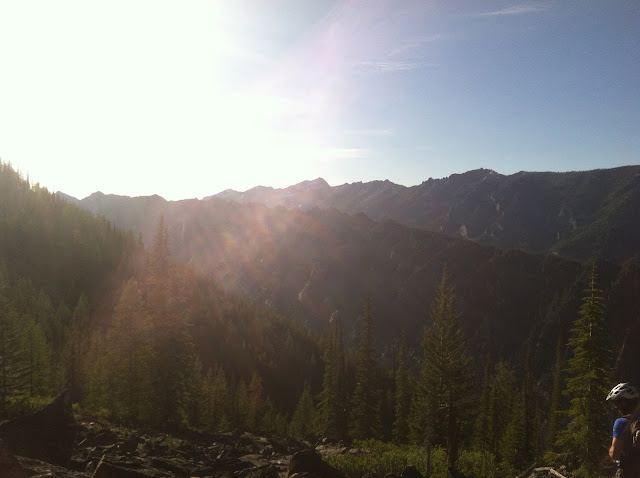 As far as yesterday's ride only five showed up to see how high we could get on Ward.  The answer 8400 ft before the snow became annoying. Beau brought his friend Scott along to pop the cherry on his new Giant. The previous day's wind managed to knock down five more trees since it was cleared this weekend. The trail is once again cleared except for two big monsters well beyond the abilities of our handsaws and even our small chainsaws.  It is becoming clear that we may to assign loper duties along with sawing.  With fewer snags remaining upright to become future problems, our future in trail maintenance will need to shift to taking care of all dog hair lodgepole encroaching on the trail, especially if the FS wants an 8 foot wide corridor.

There was one moment cognitive dissonance after pushing my bike for half an hour when I saw Dean get back on his bike and  he started  pedaling up the hill and I stood there momentarily confused by what he was doing. Until it dawned on me that I had spent too much time at the Whistler Bike Park last week and was forgetting that bikes can be ridden up hills as well as ridden down. Above the burn, we played a continuous game of anaerobic leap frog as we took turns climbing, pushing and leaning against trees. 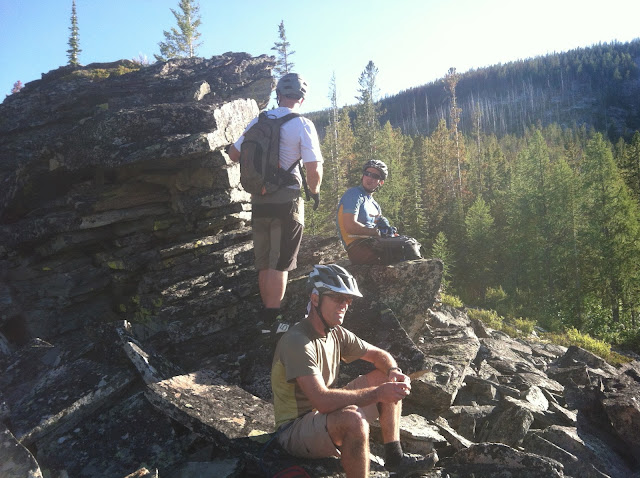 Those days in Whistler must not have been a total waste, the upper section of Ward seemed easier than I remembered, and even the drops in the burn seemed fun rather than intimidating. Once on the flowy lower section I can't remember every using my brakes so light and delicately, kind of like a shy teenage boy who for the first time has managed to talk a girl out of her bra.  It was so titillating felt a need for a virtual spanking.

Normally I'm not concerned about now shows, but this week one of our missing brethren gets the years first WTF award.  I was down at the Barn the day before the ride a certain Mr Riley assured he was riding and that he would bring his grill, so I wouldn't need to bring mine. Lo and behold the day came, no Riley and no grill.  Most everyone else fled, except Rob and I who did out duty surviving on Single Hop and salsa.

Not sure where next week's ride will be. First off next Wednesday is the 4th of July, and secondly Camas still hasn't been cleared and Sleeping Child is already covered in downfall again, only a week after being cleared.

Posted by MonkeyDoo at 3:16 PM