When I first announced the ride I managed to piss off half the population when I referred to the Wednesday night riders as "ladies."  As I was promptly informed, several leal life authentic local ladies had just finished the Fitz-Barn ride, while their supposedly hard core spouses stayed home constantly hitting refresh on their computers to follow their ride: 5 days, 400 miles, self supported. Just a reminder that ladies are not the delicate fainting flowers that victorian men thought they were, and just because their gonads don't hang down in a saggy bag they are truly tough, strong badasses. Kudos again the Cassie and Tracy. 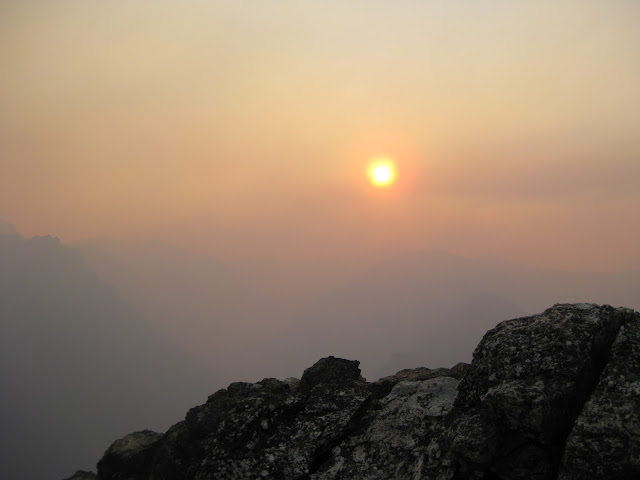 And smart, they are much smarter than the hairier sex.  If they had seen a huge cloud of smoke hanging over the trail they were planning to ride, they would have done something intelligent like gone to the brewery for a beer. Driving to pick up Dean and seeing a plume of smoke so dark it looked it was coming directly out of Mordor, with the center of the blowing over Bear Creek Canyon, I wished I chosen a different ride, but I had an obligation.  Unlike some other organizers of rides I felt an obligation to suffer along on a ride I had not only chosen, but pushed for a strong turnout.  Indeed we had the biggest turnout we have had in a month. Five others were just as clueless enough to sacrifice their future health for a ride, and a chance to get our of the house for a breath of fresh air. 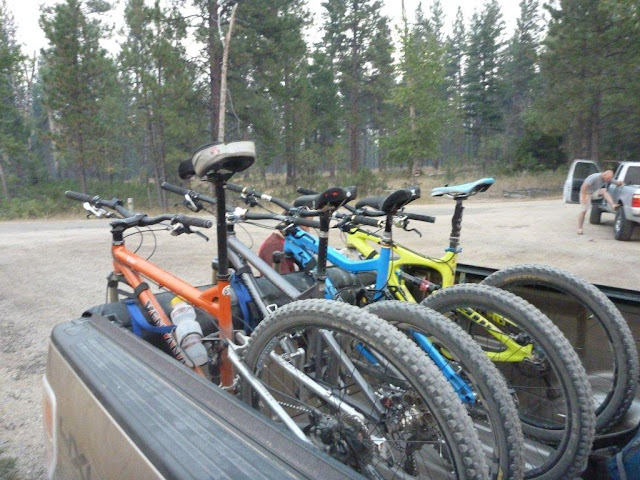 Among us were two new fathers.  One new bambino on Sunday, and one two weeks earlier.  Knowing  the dads, that should mean plenty of future bikes and business for Chad.  I'm still trying to figure out if they have the most understanding wives ever, or if they have already managed to annoy their wives so much during their paternity leave that the new moms just wanted them out of the house. 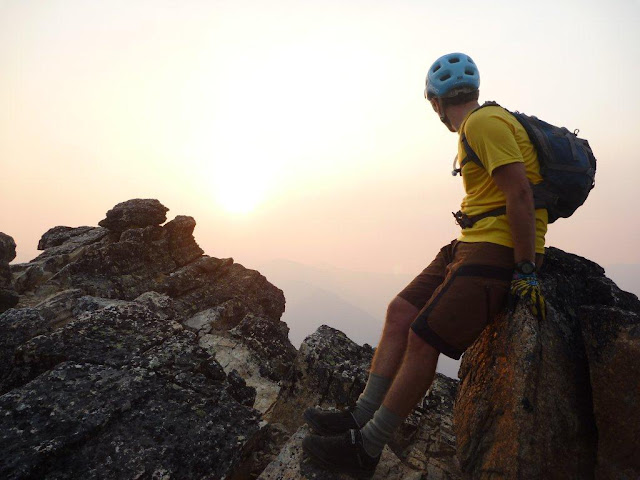 If there were any advantages to experiencing what it must be like to be the Marlboro Man, I guess the smoke kept the bugs away almost as well as zebra stripes do.  Smoke was also an issue for last year's ride, no duh.  It was August last year, too. Last year though, the winds were kind and blew the smoke away. 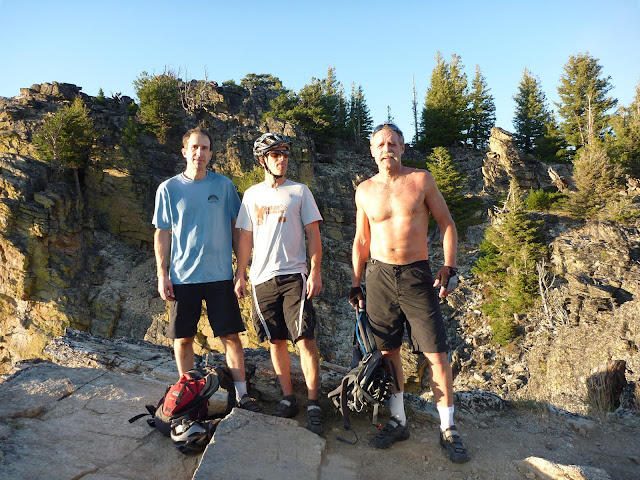 We all agreed that we would maintain an easy pace to try and minimize our exposures. I was quickly reminded that an easy pace for Dean, Jeff, and Eric is not what most people would consider a casual pace, which must explain why I'm still recovering from the effects of the smoke inhalation.  Everyone had the pleasure of scratchy eyes and burning throats. 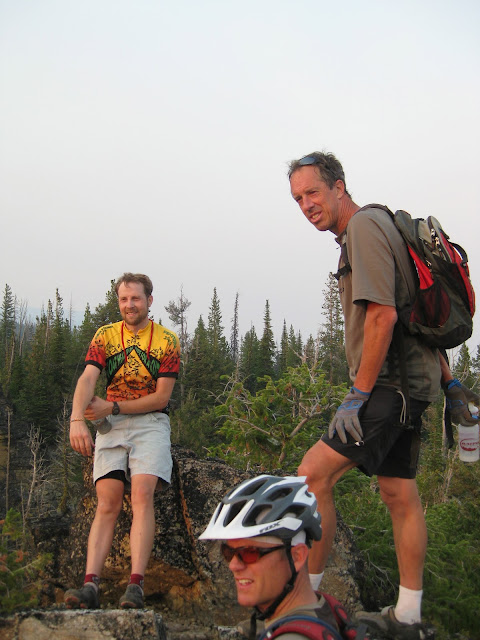 One reason I choose to ride, and impair my health was the chance to hang and socialize. I had just spent a week vacation with my kids, and I needed some adult conversation and beverages.  Wrong place for adult conversation. Right place for adult beverages. While riding, I had the chance to discuss online dating with someone who has had some success.  He passed on a second hand account of a woman's experience. 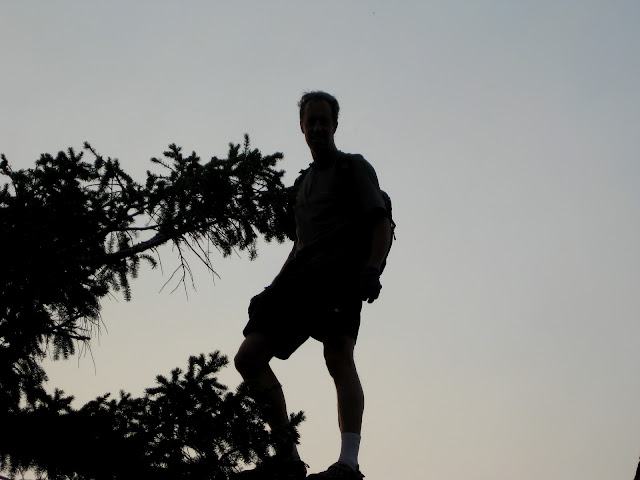 When she started she sent out 10 emails to potential men. She had 10 replies and 10 dates, and at least one keeper.  Now my experience.  15 emails, 5 responses, of which 4 were NO, and one date.  This may not be a fair comparison since she is younger, a lot hotter, tall, blonde, scandinavian, and has an empty nest compared to the average schmuck that I am.  Then again calling me average might be a little generous, especially compared to the people I hang out with.  Most everyone else is taller with more hair, I tend to lag at the back on climbs, and end up somewhere in the middle on descents both on skis and bikes. I make a decent salary, but at least one member of gang so skews the curve that I still end up around the median.  For awhile I thought I might have an edge in the education department, until I remember that a bunch of the other guys in the group have their own labs at RML.  Even more depressing I found this:

"Females' sexual attraction towards males may be determined by the height of the man. Height in men is associated with status or wealth in many cultures  which is beneficial to women romantically involved with them. One study conducted of women's personal ads support the existence of this preference; the study found that in ads requesting height in a mate, 80% requested a height of 6.00 feet (1.83 m) or taller. The online dating Website eHarmony only matches women with taller men, because of complaints from women matched with shorter men."

In an attempt to improve my odds, I think I need to add some photos to my profile.  On problem is that nearly all of my photos have me in a helmet of some sort, and not enough in a social setting. I have also noticed that a lot of other men like to show off fish and dead animals.  I have some ideas for some additional photos and I need some advice, and no I'm not adding Chicken Crit tighty-whitey photos. Plus I'm pretty sure all those photos are of the funhawg. 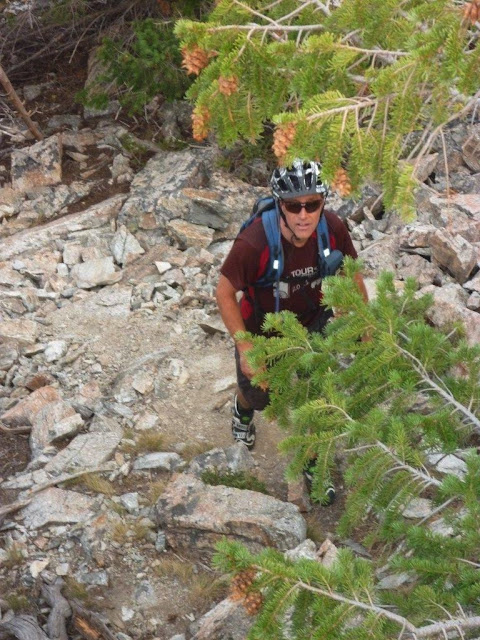 As far as the ride, nothing much to report other than the expected complications from smoke inhalation. The usual fast climbers were fast, and the usual fast descenders were fast.  I understand why those Knollys go down so fast. Still have figure why they go up so fast, too.  One unwitnessed wreck without complication.  No lingering at top for the view.   Found the best way to connect back to the road after doing the downhill shortcut. The new dads couldn't dawdle for beers.

Not sure about next week's ride, I guess we'll see where the smoke is worst. Cough, hack, cough, hack.