Wait wasn't this week's ride Shannon Ridge. Well yes it was, but well, so you see, I kinda, didn't quite make it there.  I went renegade with Chad and Eric to Missoula to race the super D course at Marshall mountain.  I didn't want to go (well maybe a little.) Chad made me go. ( Did I mention that the Super D is sponsored by the http://www.mtalphacycling.com/, a bunch of Missoula mountain bike hotties. Not that the presence of women in Lycra would have any influence on my decision.) He had my bike, and although he didn't say it explicitly, these kind of threats are never made explicitly, the gist was: plastic bike, cement shoes, Lake Como.  I was surprise to learn that they made SPD compatible cement shoes, but regardless I 'm sure you could understand the predicament I was in.  If I ever wanted to see my bike again, with it's new 36 middle ring and bash guard, I would have to turn my back on my loyal friends and instead drive to Missoula, replacing the grill with after ride tacos and Big Dipper Ice Cream.

I know what you wishing.  "Hey Monkey Doo, Gay Cabellero, dickhead (or whatever your personal term of endearment might be), would  you please cut the rationalization crap and just get to the stuff we care about the photos and videos." The answer is no. So just relax and keep reading and then one day, when I win the Grammy, or the Emmy, or the Oscar, or whatever the award is for literature,  you can say, "Hey, I used to read him back when was still really shitty."

For my other reader, I also know what you are thinking. "Hey, (insert personal term of endearment) you aren't following any of Vonnegut's suggestions for quality writing."  You are correct, and as I said last week, I'm no Vonnegut. 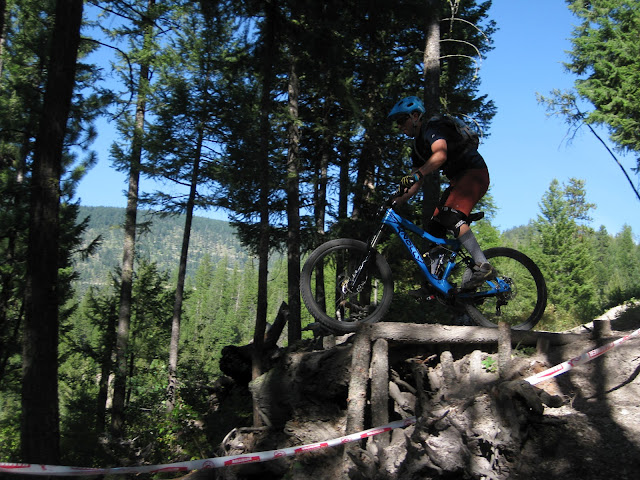 The super D course uses the downhill portion of the xc course on Marshall Mountain with an option to ride the A Line.  There is about 500' vertical and the fast riders do it in a little over 6 minutes, except for some dude named Dillon who has the only sub 6 minute lap. The trail on the day of the race was hard pan topped with a scattering of loose shale.  For comparison Shannon Ridge is 600' vertical, Upper Jenny Ridge is 900' and lower Jenny Ridge is 400'.  However, Marshall mountain is steeper with switchbacks and two uphill sections.

When we gathered at the top, it sure seemed like we brought RPGs to a knife fight, with our 6" full suspension Knolly, Turner, and Ibis toys. While everyone else was on 29er hardtails.  Soon we were to discover that just like a bazooka in  hand to hand combat, a knife is still sometimes the better weapon.
Hard to believe it, but the key to the super D were the climbs.  Two anaerobic lung burners, one a section of tight switchbacks just before the Aline and a second longish ( for a 6 mile lap) road climb. Other than the optional jump on the A-Line there was only one other technical feature, a 2 foot drop at the start that I misplaced my family jewels on the first two laps, before locating them before the my last run, and discovered that the drop was nothing. My first two runs are best tossed into trunk, wrapped in chains, dropped into the Mariana trench and forgotten. By the final run I managed to cut my time by 3 minutes when I actually started to feel comfortable,  relax and get slightly more aggressive. 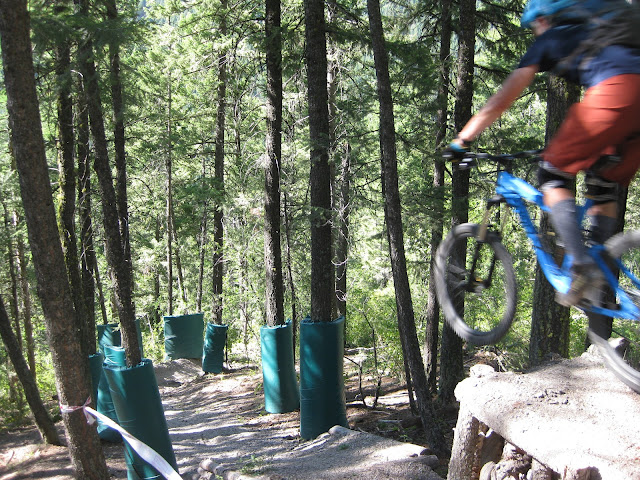 Eric and Chad didn't have the same reservations.  Eric managed to get a practice ride in and was the only person hitting the A- Line that day that I know of. Dillon suggested just rolling the jump, since it was no big deal. I'm not sure what world Dillon is from, but it must be one full of Tinkers and Schultzes. Chad, unfortunately didn't get a chance to scout the line, otherwise I'm sure he would have been showing off too.  Chad and Eric finished just out of the money at 4th and 5th. No doubt with more experience on the trail they would have broken into the money.

We did have one winner, Caelen, already a sponsored athlete at age 11 showing that his sponsorship is due to more than just his dad owning a bike shop, won the junior division.

I was thinking, always a dangerous thing, that we need to do something similar in the Bitterroot, but with some changes to reflect our unique riding challenges.  First, more rocks and roots.  Yeah, the switchbacks up there were steep, tight, and technical, but we need something to make our trail bikes worthwhile.  Everyone needs to carry a saw and somewhere  along the way there will be mandatory log cutting.  If you don't have a saw, one will be provided and it will something special. Third the course needs move from trail to trail, so no one can get too dialed in.

With that in mind I was thinking, twice in one day, very dangerous, that this September when interest in riding seems to wane, and we start to run out of fresh rides,  that we should have a rogue, unsponsored, unofficial, unsanctioned Super-D down here in the Bitterroot. Start out easy with something like Jenny or Shannon Ridge, then perhaps Bear Creek Overlook and finally work up to Weasel Creek or Camas. 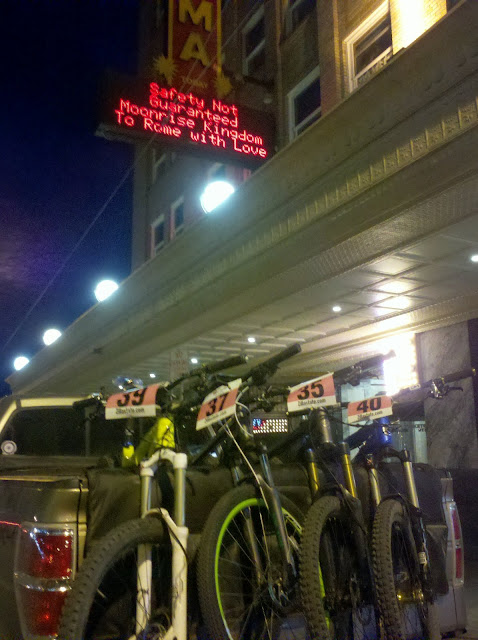 Hope the official Wednesday night beer and grill was equally fun and successful.