Sunday afternoon I was supposed to have a date, a little chance get to know each other over coffee. Then, surprise. Later last week when I got ahold of her to confirm, she asked if we could postpone it to some later time, a time yet to be determined. I guess she had a better offer, presumably with someone who wouldn't be blogging about it. Not that I would. I do have a tiny morsel of class, a tiny crumb, barely enough to be an appetizer for a mouse, and I don't believe in kissing and blogging. 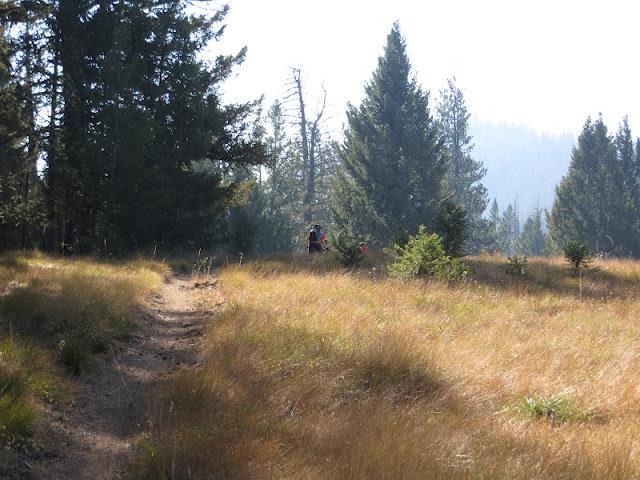 Not that meeting for afternoon coffee didn't already have epic fail written all over it.  The thing is I'm not much of a coffee person. I tend to prefer roasted mate with soy milk, although the occasional espresso from the baristas/bike mechanics at the Red Barn are helping me acquire a taste. 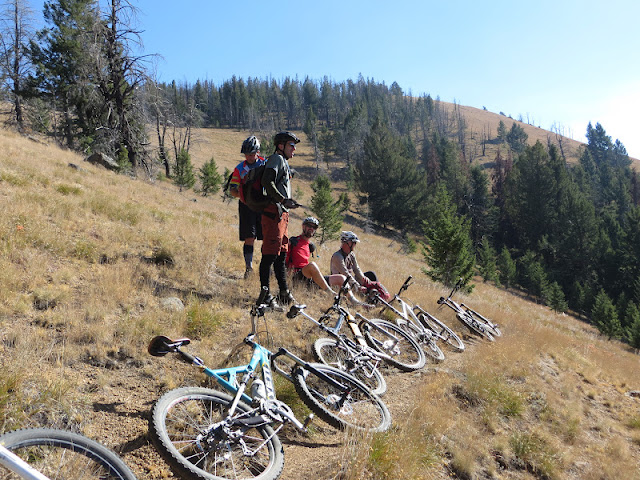 In general I would prefer to meet someone over a pint of ale or even a lager where hopefully beer googles and the anxiolytic effects of the alcohol could potentially work in my favor. Going into Missoula's preferred coffee house of the week, I could only imagine doing something idiotic like ordering a triple shot skinny Iced Cinnamon Dolce latte with extra whipped cream and sprinkles, instead of a more manly americano, and once the caffeine kicked in end up talking like Simon from Alvin and the Chipmunks. 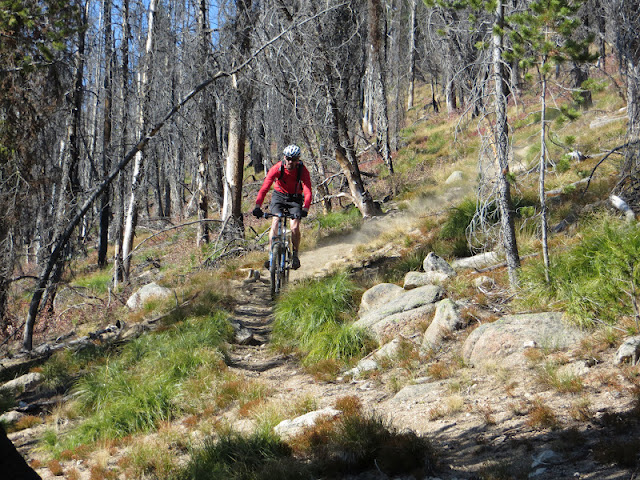 Like most events that initially seem negative, there was the option to make lemonade from the silver lining. Sunday turned out to be another gorgeous day, perfect for mountain biking, and a new trail to explore.  I had heard about Piquett Ridge and Creek for quite awhile, and had heard horror stories of heinous downfall, fires through the area since the last ride 3 or 4 years ago and an 11 mile hike out after mechanical failure. Along with the fact the no one had gone back there to ride in the last three or four years I had come to believe that this ride must a particularly nasty example of a Bitterroot adventure. I wasn't reassured by Jeff's enthusiasm to repeat the ride.  Jeff, as most of us know, is notorious for enjoying rides that , how I do say this politely, have a high probability of becoming interesting, and usually I'm there when things become interesting, which seems to include handsaws and carrying bikes on our shoulders. 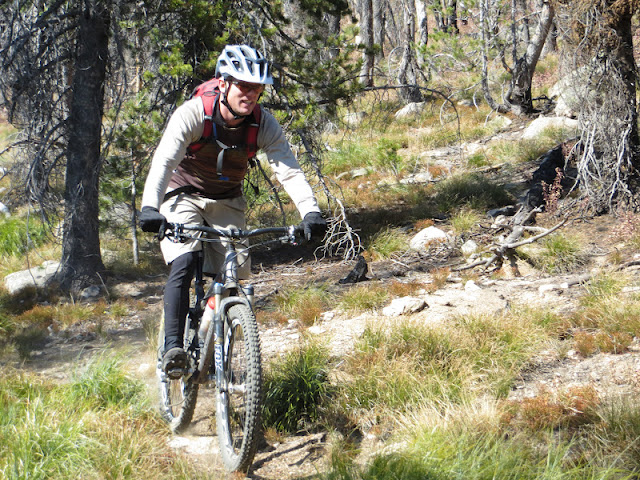 Of course, as I just mentioned, it wasn't like I had anything better to do.  It's kind of interesting. Since I rejoined the dating scene six months ago, I have now had interactions with three women.  The firtst one lasted two dates; the second one, one date; and the last one didn't even last that long. No doubt the pessimists out there are thinking that the more I try this online dating thing the worse I'm getting.  Personally, I'm more of the glass is half full type, so what I see is that I'm getting more efficient at weeding causes of future misery. Since if there was one thing I learned with my divorce is that there are worse things out there than being single. 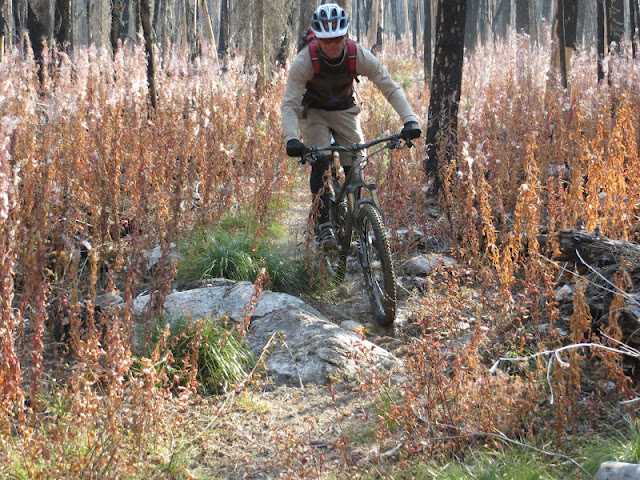 Did I mention that fall is my favorite time of the year for mountain biking.  One of the reasons my hunting success is so mediocre.  The morning might be colder, so leggings, tights and extra clothes need to be packed, but once the climbing starts all those extra layers come right back off,  the afternoons warm up to the mid 50s for perfect riding weather, and in theory we should be in peak shape after a spring and summer of pedaling. 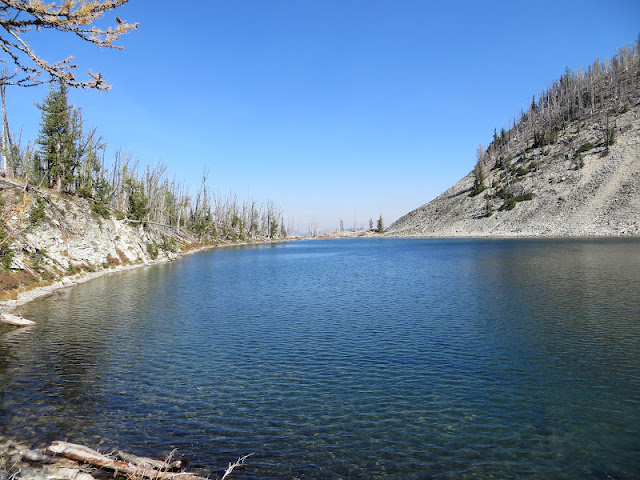 Given my reservations about the ride, the start was not auspicious. Somewhere between riding Como on Wednesday and unloading my bike on Sunday, my rear brakes pads went on a sabbatical, that's right both pads, the clip, and locking pin made a break for it together. The ironic thing was I had just had the brake pads replaced the week before and had my old pads in a bag back on my workbench at home.  Why would I need to carry extra pads when I had brand new ones on. Like usual I found myself woefully underprepared for emergencies. 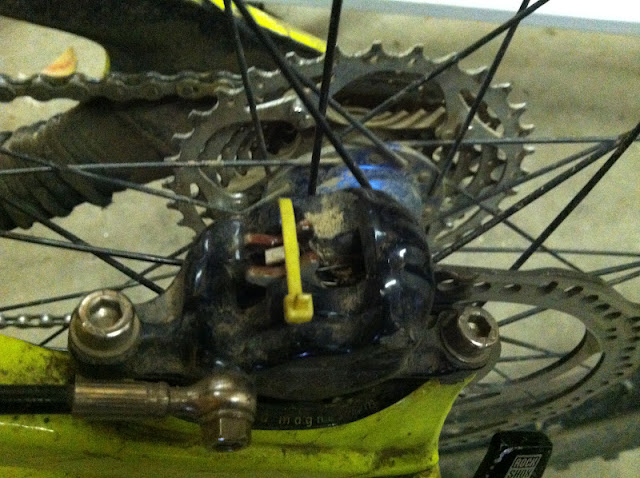 Luckily, Rob just happened to have packed a brand new set of pads, since his rear pads were wearing thin, and he just happened to have Formula brakes just like mine.  We were still a locking pin short and no one had small enough zip ties.  After scrounging around our packs and Jeff's Honda we discovered a small  clipped zip tie that still had a few teeth unused. We were able to clip it and reuse it , and amazingly enough it lasted to entire ride.  For a long time I had believed that duct tape was the critical tool for emergency repairs, more and more I'm starting to believe that zip ties are even more essential. 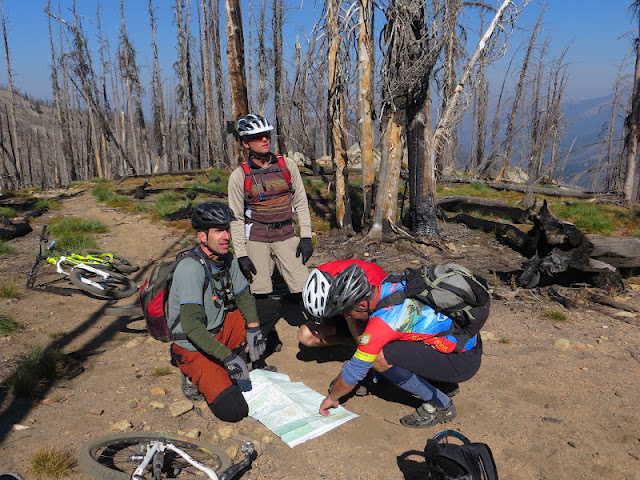 Once on the trail, one more brief moment of panic when it appeared that Bret's freewheel was frozen.  Luckily that resolved with removing the wheel and putting it back on. After that I spent the rest of the day getting spanked from Jeff, Jerome, Bret, and Rob. No not a 50 Shades paddling, more of a metaphorically ass whooping. 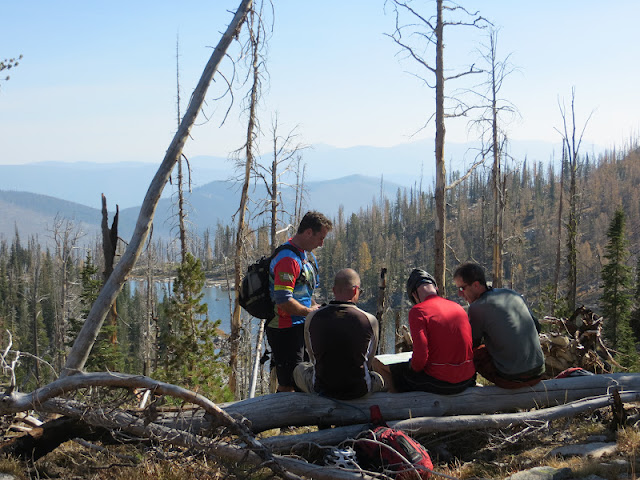 Not that I'm opposed to an actual spanking, the opportunity has just never presented itself.  I imagine a good spanking is enjoyable in the same way the pain from steep climb becomes a pleasure when it is embraced.  I read that in New York, one adult sex shop had to replace their leather paddles with rubber because all the worked up wives and girlfriends were getting a little too enthusiastic paddling their husbands asses.  I suppose it goes without saying to avoid any spanking the day before a big ride. 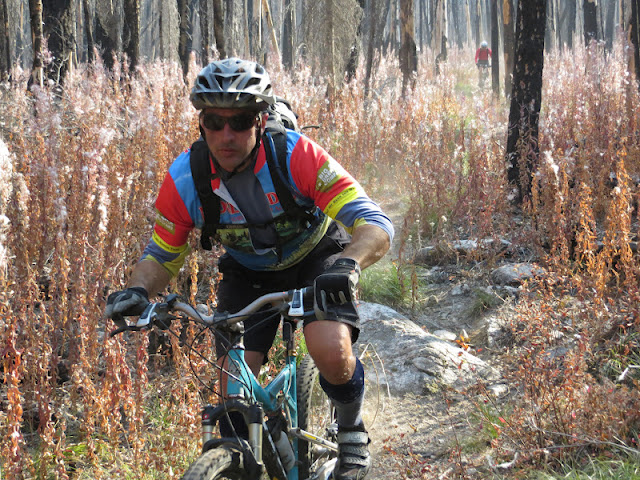 As far as my metaphorical spanking goes, I seemed to be the only person impaired by the smoke induced riding layoff in September, and spent the rest of the day trying to catch them and my breath.  I did discover that my apprehension about the ride had been misplaced.  While there were a few sections that required pushing the bike especially on the last pitch to the top of Rombo, they were interspersed with fantastic open meadow ridge top riding with views of Trapper and Boulder Peak. 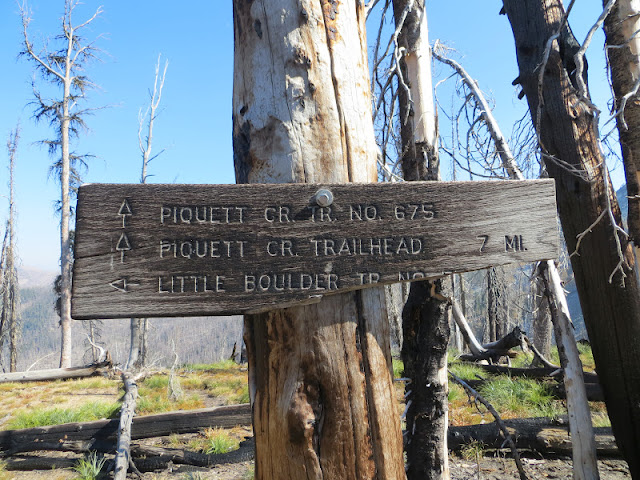 Once we reached the intersection with the Piquett Creek trail at the saddle between Rombo and Piquett we did something totally out of character, we abandoned out bikes to go for a short hike to Piquett and Slate Lakes. Contrary to popular myth, mountain bikers have a an aesthetic sense and still can appreciate the beauty of mountain lakes, an are even willing to get off our bikes to walk to them if the trail is beyond bike friendly. 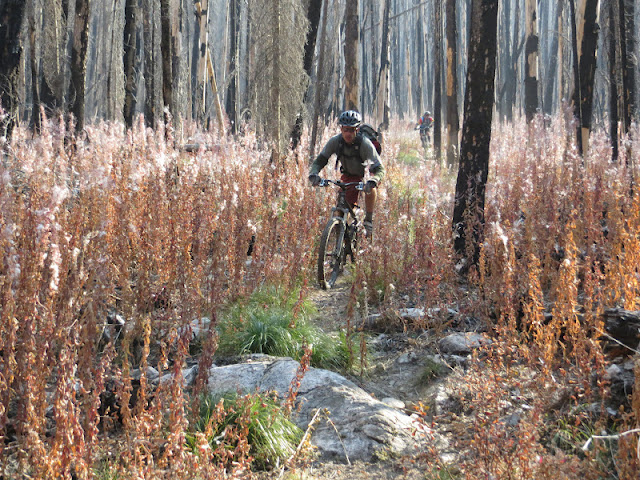 On returning from the lakes, we confirmed the popular opinion of mountain bikers as being a bunch of thrill seeking hooligans as we ripped down the trail making quick work of both the steep technical switchbacks and rock gardens of the upper section, and the fast flowing lower section.  It was on this lower fast section that the rigors of trying to keep up with everyone else caught up with me.  I was fried, and it was depressing to see the easy fast trail ahead of me, but by then too tired and sloppy to maintain the necessary focus.  I was the only thing to run out of energy. My GPS ran out of juice with 5 miles to go at which point it had recorded 3225 ft of climbing over 8.2 miles and 2,559 ft of descent over 5.0 miles. There were still about 5.0 miles of trail and around another 1200ft of down to go.

View Piquett Loop in a larger map
Posted by MonkeyDoo at 9:46 AM