The ways of the gods are unknowable to man so I am ignorant as to whether those were tears of joy or sorrow that fell in response to the French Caboose's departure. Regardless of the motivation, they were a portent of what lay in store for us. 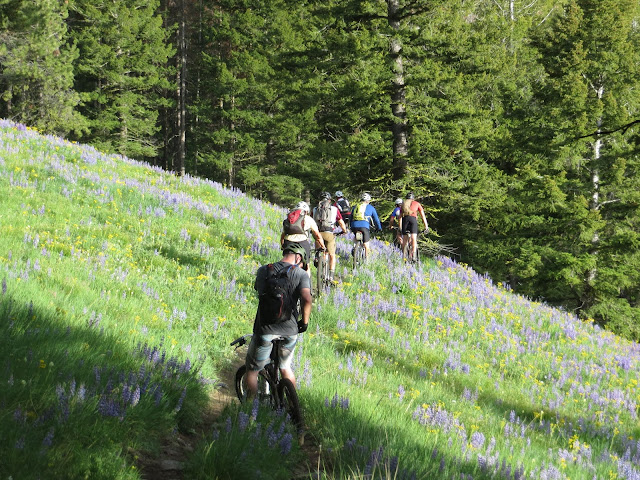 The gods were clearly in the mood for a celebration and in turn treated us to what may have been the penultimate Wednesday ride in a long series of excellent rides.  The angels tears and overcast skies  keep us cool on the grind up the ridge. 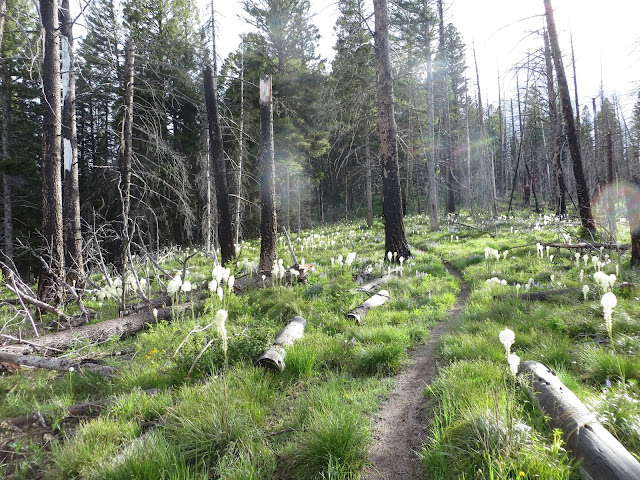 Along the climb the almost overwhelming scent of lupine filled the damp air.  Blossoms of bear grass on the side of trail blazed like LED headlamps when backlit by the occasional appearances of the sun. 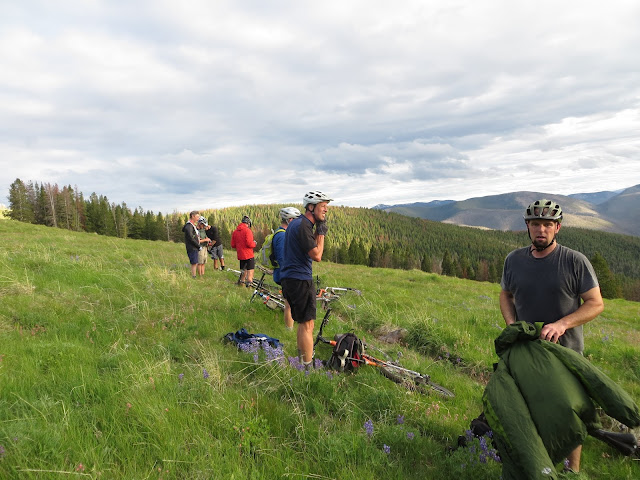 I don't know the physics behind what moisture does to sandy soil whether it changes the angle of repose or changes some adhesion coefficient, but I know what it means for riding; skittish sand is converted into hold me, squeeze me, never let me go loam. 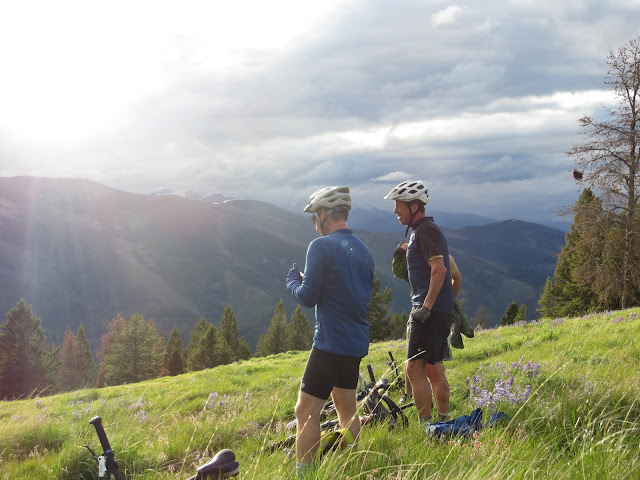 With the solstice having occurred only a few days earlier, the long days allowed us to extend to ride nearly two miles past Fire Creek and up to the ridge crest. We were rewarded not only with dramatic clearing skies, but with one more section of screaming downhill.  With only one tree having fallen since trail day.  The only thing left was the memorable Fire Creek downhill, or for some of us Warm Springs Ridge. 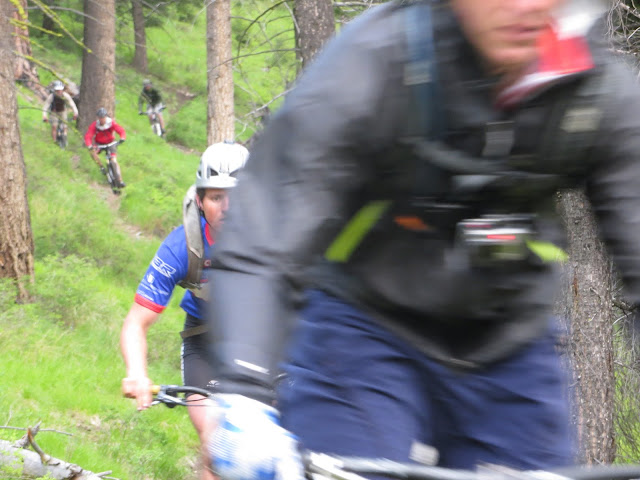 Speaking of the gods, I can shake my head in wonder in how fast I was dropped on the climb. 100 yards and two switchbacks and I had already fallen off the back of the herd of mountain goats flying up the trail. Along for the ride were several Wednesday virgins.  What a way to lose your cherry. 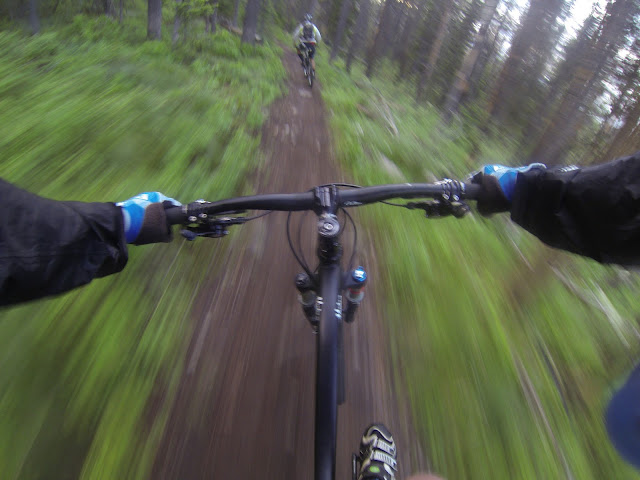 While I have occasional tried to keep up with these god/goat hybrids, does that make them satyrs, I have long ago tried to give up on trying to stay with them on the downhills. Watching the GoPro videos primarily of Chad and Travis I was amazed to watch them gaining speed and pedaling through sections that I had been riding my brakes.  I wish I knew how they did it, since brakes seem to the bane of my downhills. I only wreck when I use them. 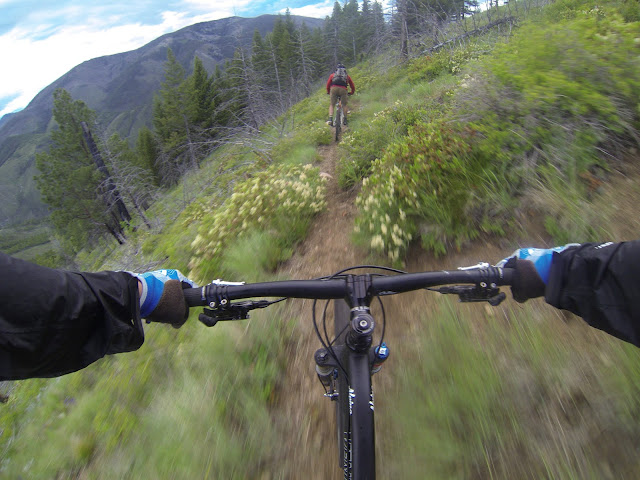 Still a very satisfying downhill from me, cleaned the switchbacks and survived without injury.  Something that couldn't be said for Travis. 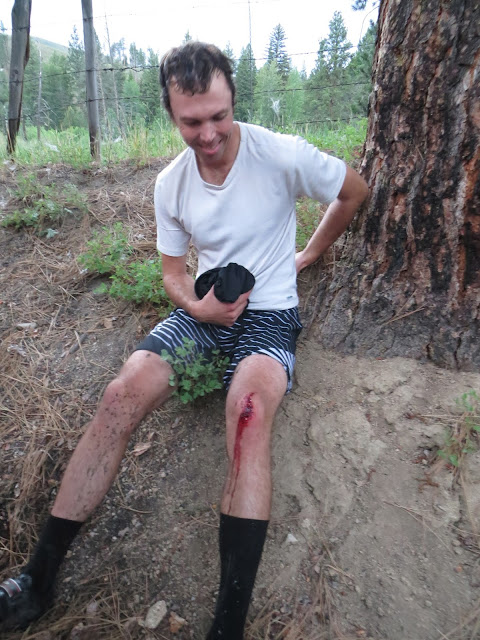 Apparently the encounter with the hidden tree was impressive in real time.  The video, while showing the brush with fate, doesn't appear to do it justice. 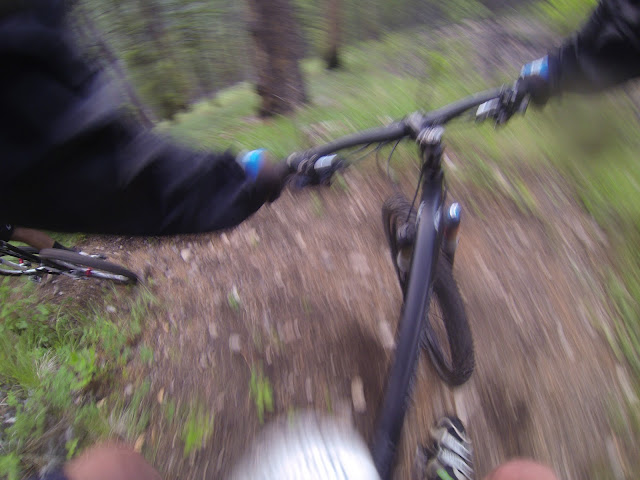 Even with the long day, we didn't return to the grill and beer until near sunset with festivities continuing  until 11:00.  It was only until I started the ride report did I realize two faux pas for this requiem to Jean. I suppose instead of the farewell hug we should exchanged the european style quasi two cheek kissy kiss, and I totally neglected to get a photo of him the entire ride.


Still I wouldn't be surprised to see him and his Audi skulking around these parts in the future. Until then I imagine I will need to resume my post as the caboose. It's been great riding with you Jean. Good luck in Moscow.

Posted by MonkeyDoo at 3:25 PM