Wait, what's with the Blue Joint title?  Wasn't this week's ride Buttercup? Yeah it was, but since I figured you were tired of lame posts, I decided to write about something more memorable.  Not that there was anything wrong with Buttercup.  As usual it was fun and I was meh. I neither crushed the climbs or slayed the descents.  Now that I'm back in a relationship and have a dog, I have lost the angst that makes for more interesting posts and my riding obsession has been muted. 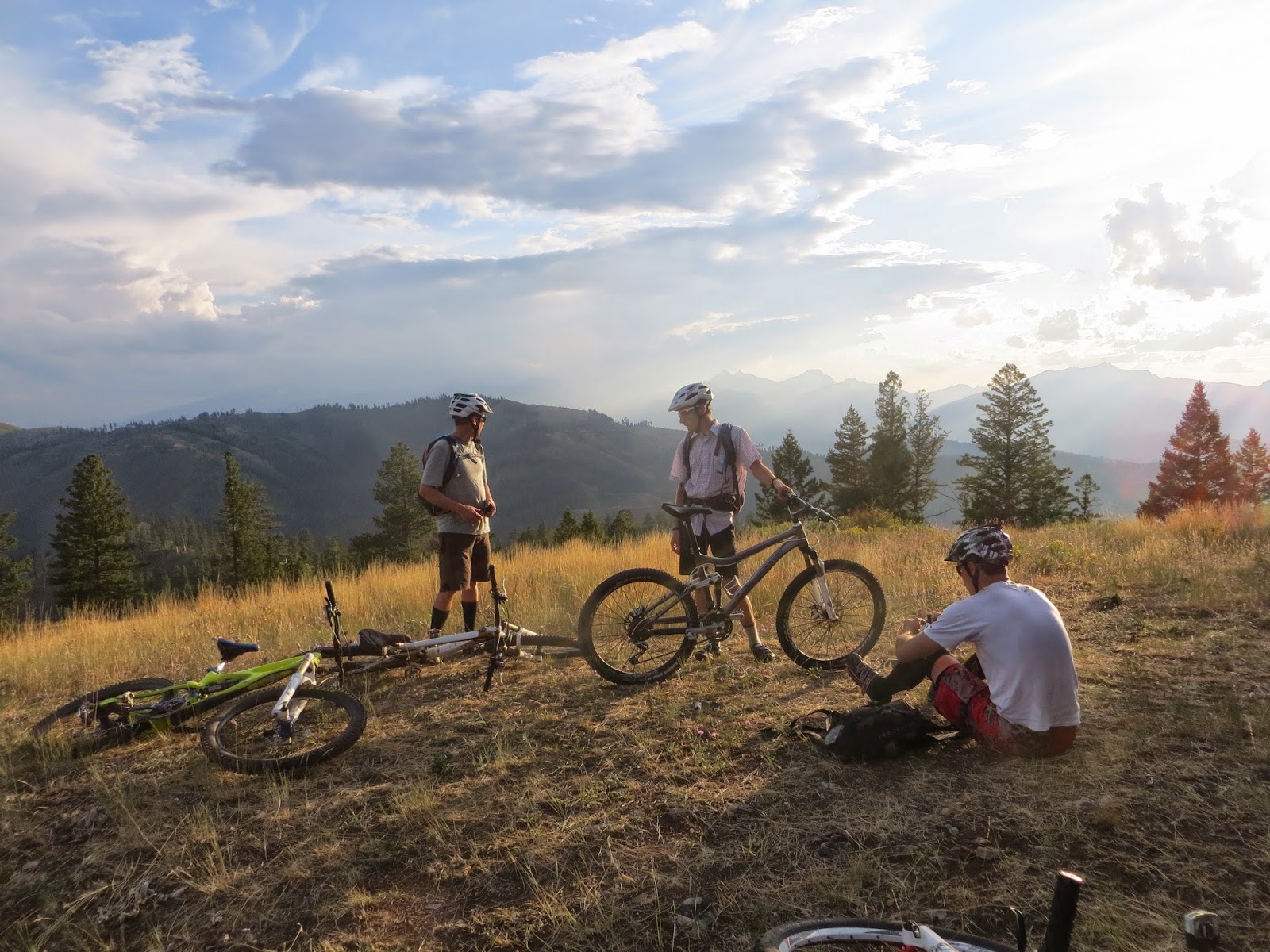 So while Buttercup was pleasant, it will ultimately not be remembered, contrasting with our recent adventure on Blue Joint.  A ride that ended with me having a butt guaranteed to attract every baboon in the vicinity, and being unable to remount a bike for the next several days.  Already in my memory, even before all the skin has returned,  the ride is already evolving into a challenging memorable adventure. No wonder we do such stupid stiff. 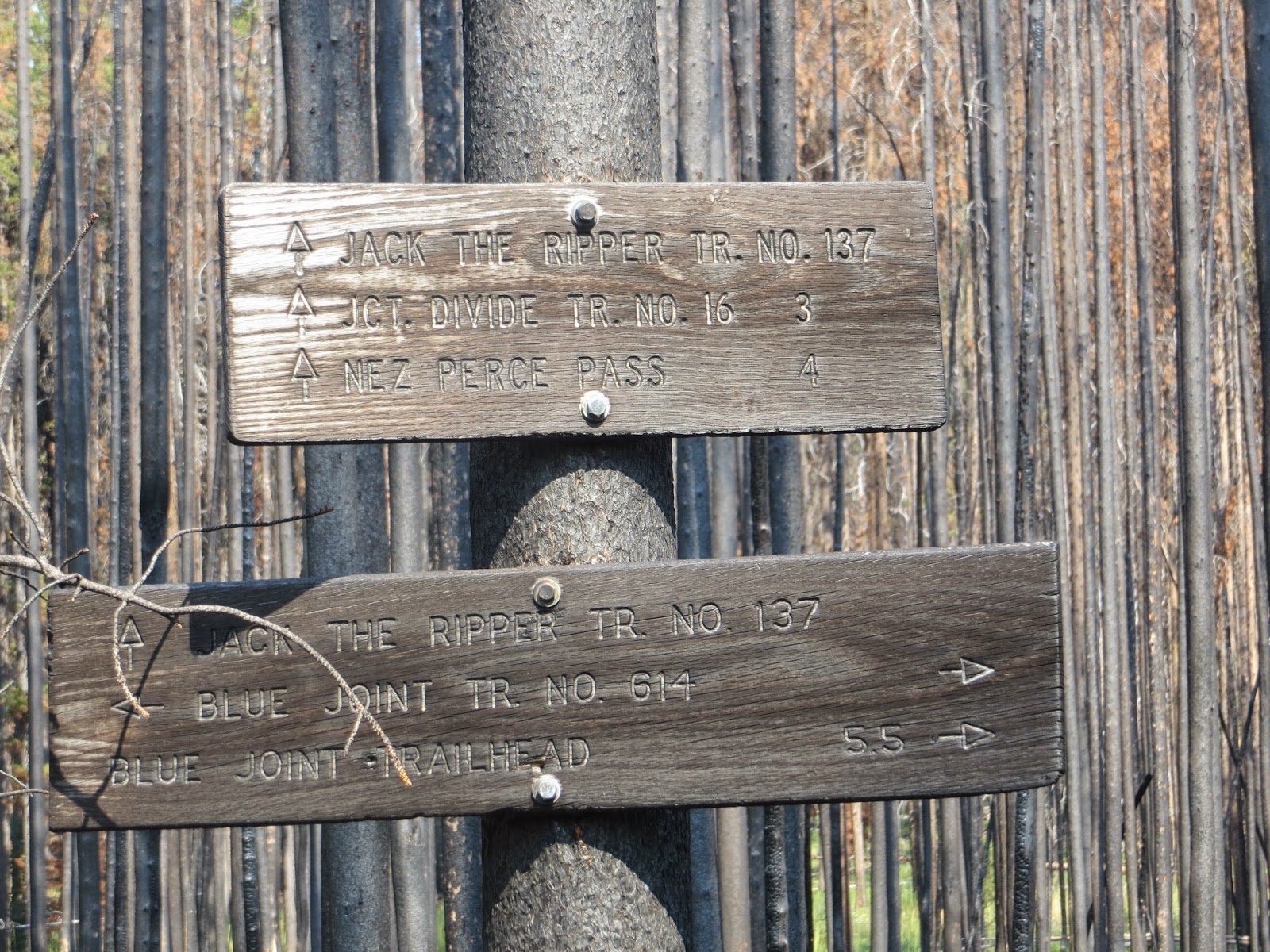 So a few weekends ago, while everyone else was glued to their computers watching a bunch of red dots move across the map from Fitzgerald's to Red Barn, I managed to talk Jeff and Rob into a trail clearing day on Blue Joint and Little Blue Joint. I  had been looking forward to trying the loop again. The last time, close to five years ago,  was accomplished with the absence of a rear brake after a stupid interaction with a stump early on Little Blue Joint. 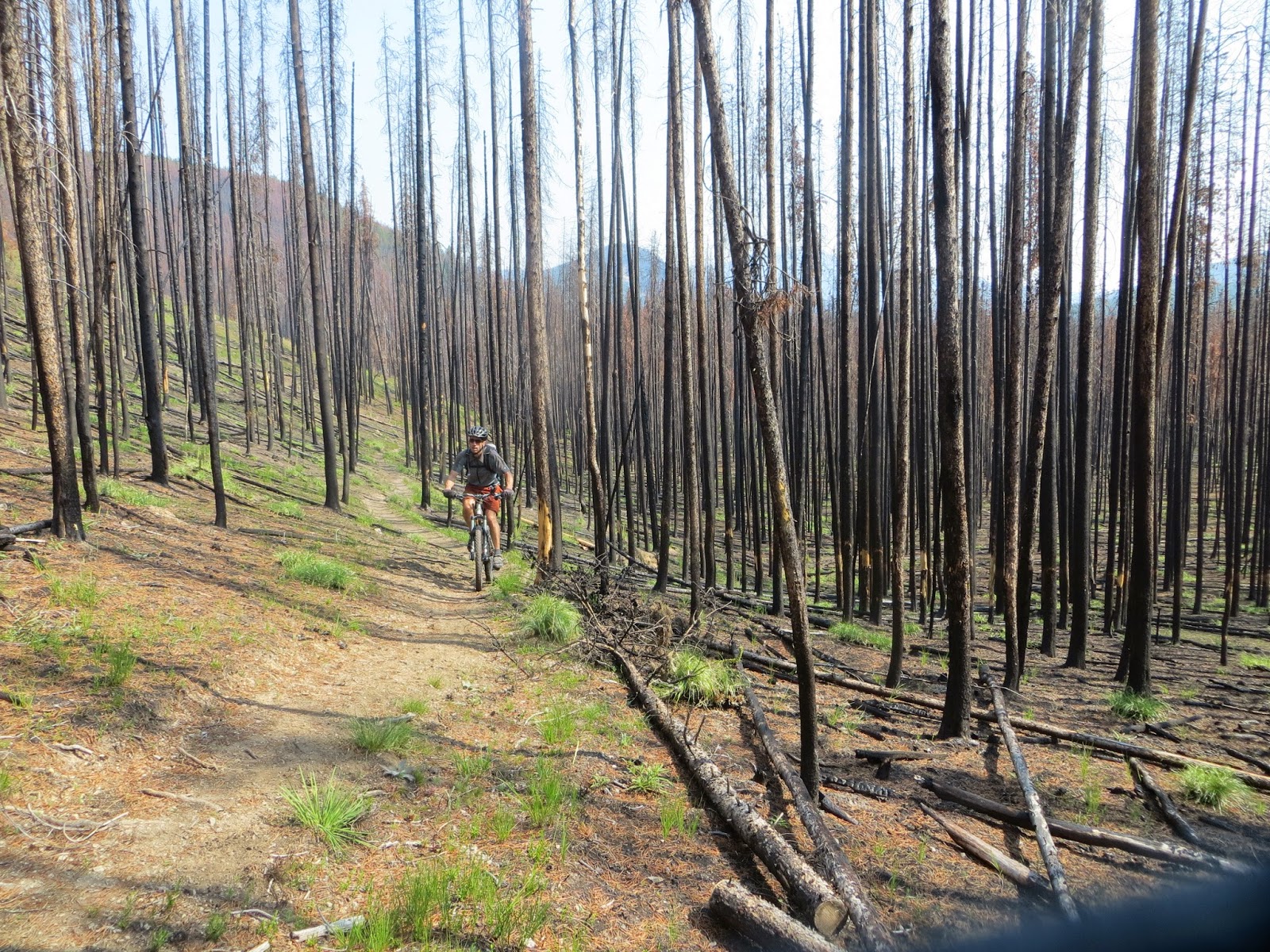 This year we decided to do it in reverse. The descent down Little Blue Joint seemed more interesting that the descent down Blue Joint which we thought would make a better climb. Everthing started out so well.  We had our silkys , great weather, and great trails.  Blue Joint had already been cleared to Jack the Ripper.  Last Year's Gold Pan fire had burned through the Ripper and down around Blue Joint for about a mile of trail.  I had heard tales of a non bikes sign at the junction. If it ever existed the fire took care of it. Up to the meadows, there the usual lodegepoles that we dispatches easily.  Heading past the meadow we kept climbing and about two miles past we ran into a good jumble of trees that we also took care of.  As we kept climbing we started running into more trees, quite a few that seemed to have been there since my last venture above the meadows.  We kept diligently clearing, and the trees kept getting bigger, now running into firs and spruce.  Eventually we realized that if we had any chance of making it Little Blue Joint we would need to give up on the last four miles.

Ahead we plodded, and the more we plodded the worse it became and it short order any attempts at riding we abandoned as climbed up, over, and around over hundreds if not thousands of trees. At one point abandoning the trail for about a quarter mile.  It there that we saw someone else had done the same and  had put blazes on the trees around the detour.  So glad they were carrying an axe, but not a saw. 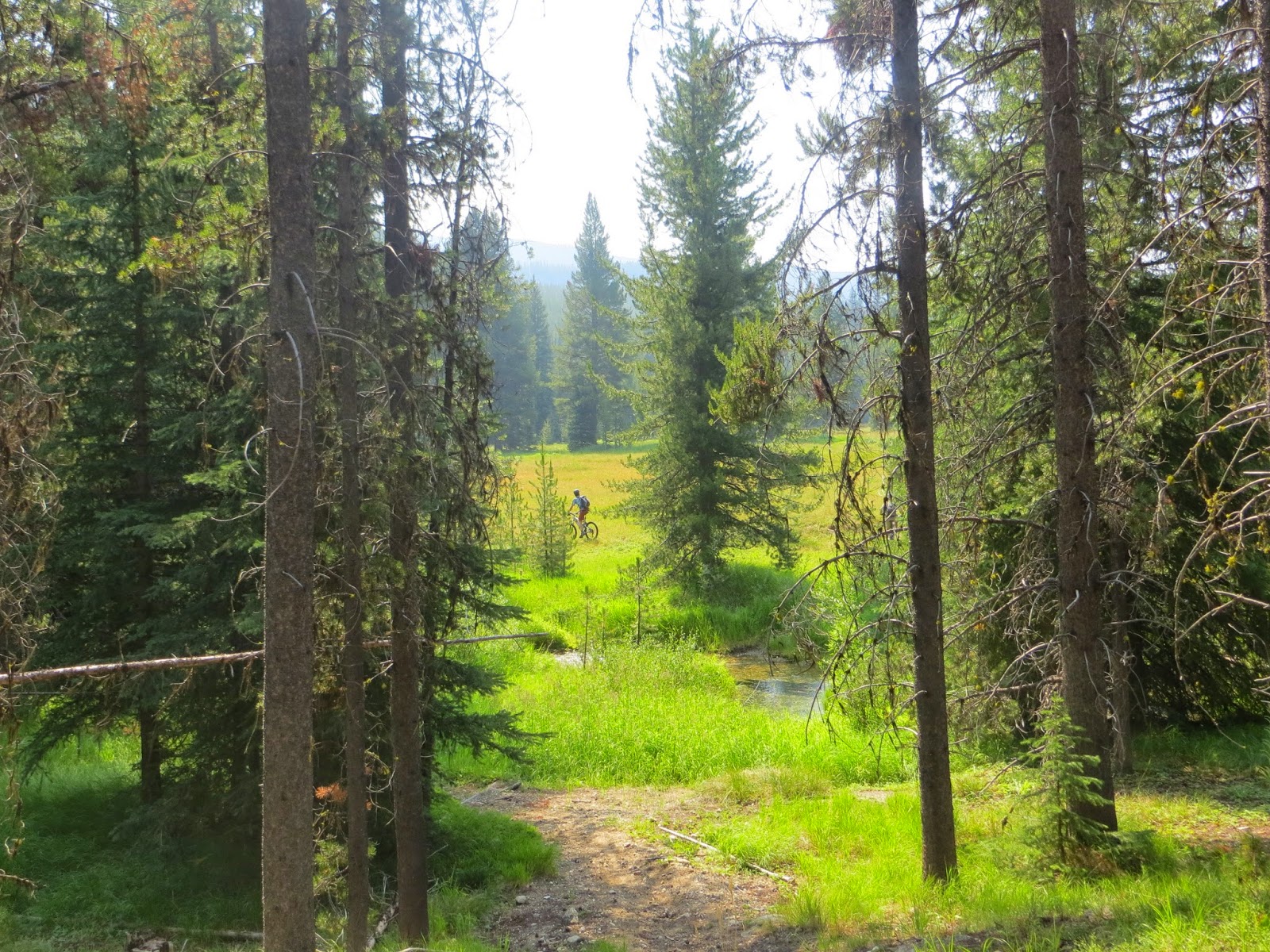 Eventually we  reached Deer Creek and the dead end road at the upper trailhead.  I had been informed previously that Razorback had been partially cleared, but Jeff pointed out that we didn't know which trailhead for Razorback was the starting point. Not interested in more climbing over endless deadfall we decided we would ride up the trail just far enough to see if it had been cleared.  We ran into trees within 100 yards and wisely decided to take the road back around.

Unfortunately, that wisdom didn't last long.  Riding back towards Woods Creek Pass we noticed a sign for Deer Creek and the trail headed downhill.   There were signs the trail had been cleared at least in the last couple of years, and a quick reconnoiter revealed no downed trees.  The Forest Service website had reported that the bottom four miles of Deer Creek were cleared recently. 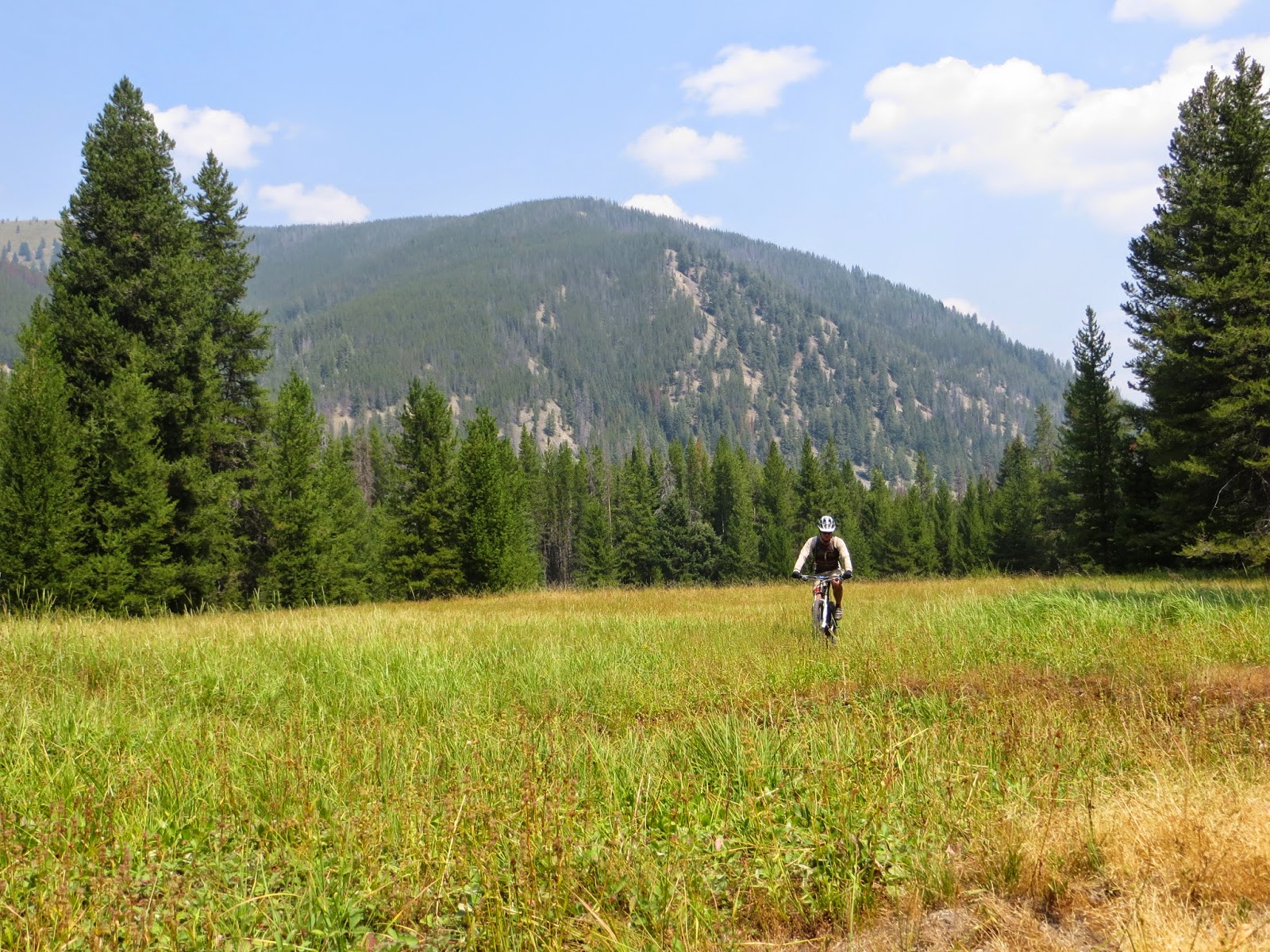 With only a couple of miles of road riding, we were already bored and the idea of close to 30 miles and gravel and pavement back to car must have diminished my common sense.  I figured how bad could it be. It's downhill and at least partially cleared.  Rob was also willing. Jeff, on the other hand was reluctant, and that should have raised some alarms. Jeff, always up for exploring an unknown trail, wanted to stick to the road.  I should have realized that if Jeff wants to stick to the road, we should stick to the road. 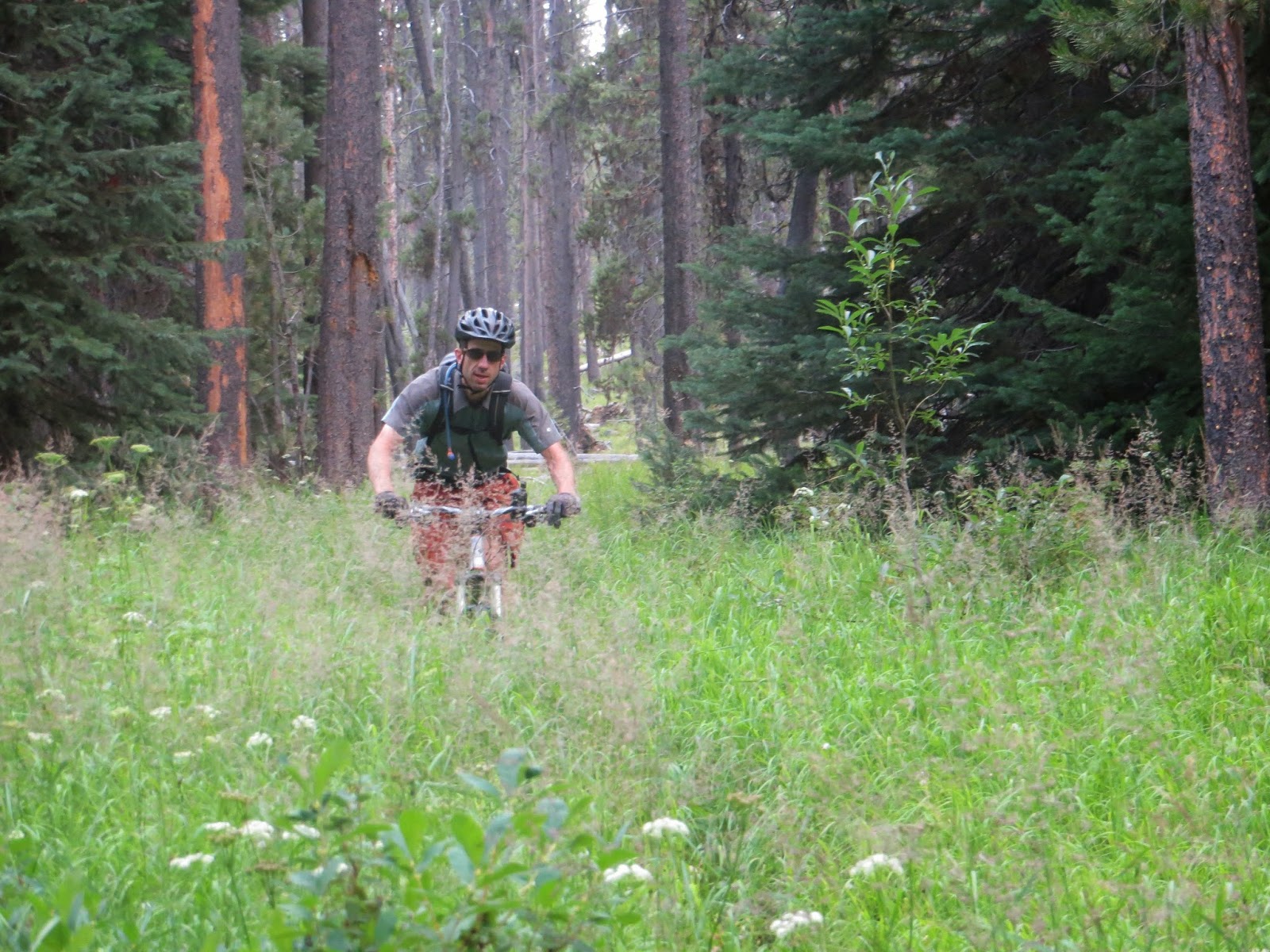 But no, the lure of the chance of getting some downhill single track during the ride was overwhelming. So off we went, and it was so good. Luring us farther and farther in. Teasing us with the occasional lodgepole, just we could justify this part of the ride as trail clearing.  Abundant huckleberries nourished us. Then slowly and imperceptibly the downfall got heavier, but still just lodgepole. Sounless it was too big to hop, we left it.  Then the downfall started having branches. Then the downfall was a Jenga challenge. It was about then that we realized we were screwed. Miles to go, and the only option was forward. Saws sheathed, water replenished from a creek, and couple more handfuls of huckleberries  tossed back and onward we went. 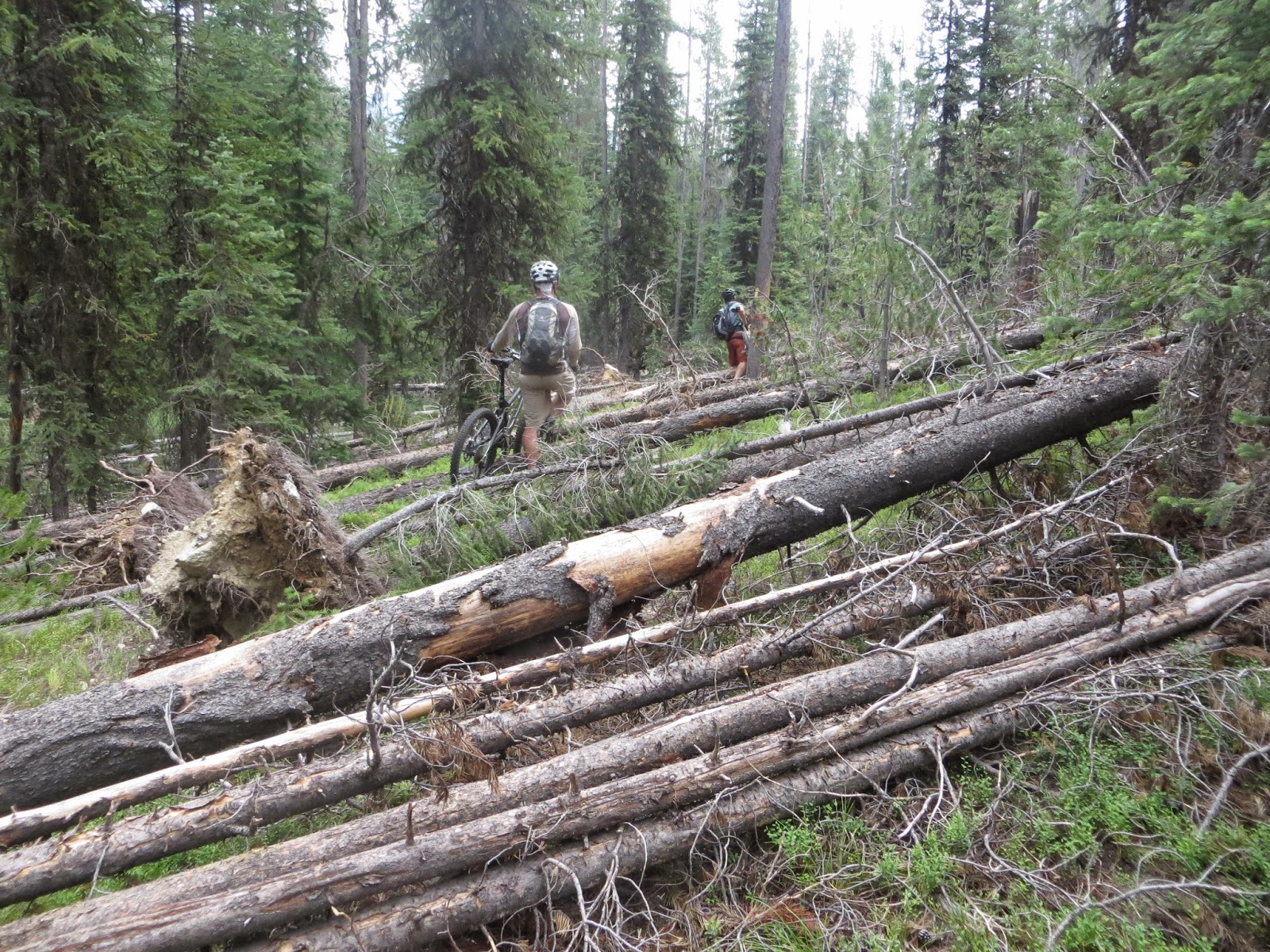 Over on Blue Joint, some may recall the trail side hilling across fields of loose degenerated granite. Stuff that just sloughs off the hill, giving way on the downhill side, and covering up the trail on the uphill side.  Now imaging those hillsides, but with the trail higher above the creek. Now imagine that hillside never seemed to stop.  Got all of that. Now add Ponderosas. Not the picturesque upright ones, but the the massive rotting, too big to climb over fallen ones.  Good there were dozens of those.  Remember that degenerate granite again, imagine that no one had been on this trail for years since the  the fallen Ponderosas had discourage everyone.  The trail was nearly gone, and were it was still there, you could see where a horse had stepped and the hillside had accelerated its race to creek bottom. At this point the DZ nuts had long wore off and walking seemed to exacerbate the chafing.  Still riding seemed like a appointment with the man in black.

Walking and getting the occasional chance to coast until the next obstacle.  Looking and hoping for that pile of fresh saw dust  indicating that you had reached farthest extent of the rumored trail clearing. 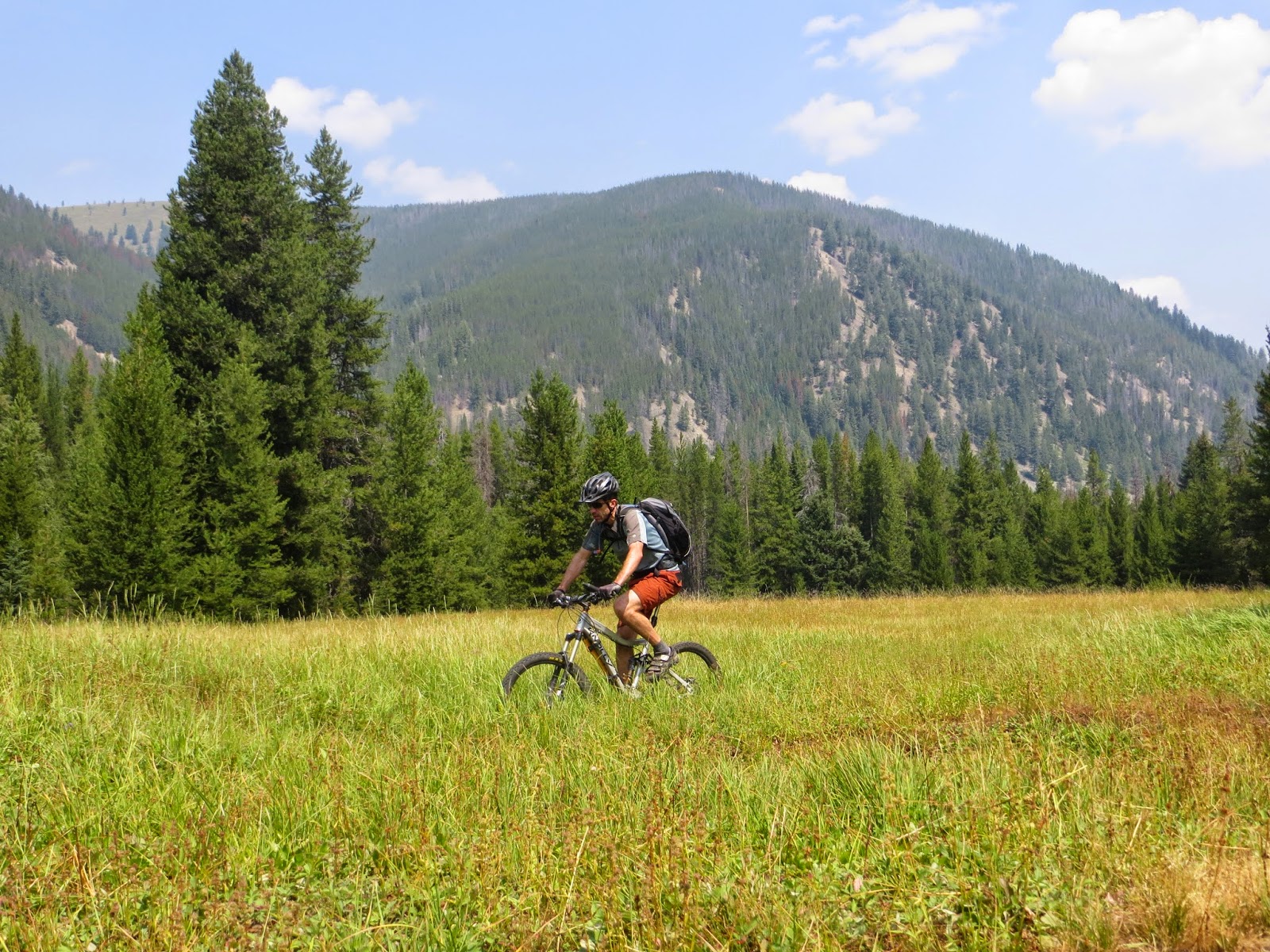 Finally, a freshly cut log. Only four more miles to the road.  The road above Painted Rocks, above Alta, above Hughes Creek.  Only 15 miles back to the car on the other side of Painted Rocks and up by the Blue Joint trailhead.  Getting back to the car twelve hours as the light finally failed.

Why is there a fricking smile on my face writing this?  Damn, I'm messed up.
Monkey Doo
Posted by MonkeyDoo at 5:32 PM