I have to say that the gods of good weather have been with on Wednesday night. Despite the overall rainy and cool spring we have been having in the Bitterroot, Wednesdays have been rather pleasant except for early April snow that froze my feet and as I have previously confessed had me whimpering like a school girl who was just kicked out of the cool girls clique. As they say April showers bring May flowers, and May showers bring June floods.

Once again cool overcast skies greeted our ride, the kind of weather I ask the weather gods for when climbing south facing FS roads for 10 miles, and as usual trying to catch up after my tardy arrival.  Not that I was alone in being late, at least we didn't drive up the road an extra few miles to catch up.


There was a moment on the climb when I realized that simply am not hardcore.  One of the tardy took a page from adventure racing and carried his bike up the hill to cutoff a long switchback and pass us. Although in reality, I'm not sure any of qualify as hardcore. In the spectrum from hardcore to playboy to cinemax and down through network TV to the Disney Channel, I hope to hit the HBO sweet spot of edgy with artistic merit.

Eventually the 18 of us, a record for the year, regrouped after getting strung out on the climb at what we thought was the fork to the ridge single track. It was a fork and it did go to the ridge, but it was about a mile before where we thought we were. 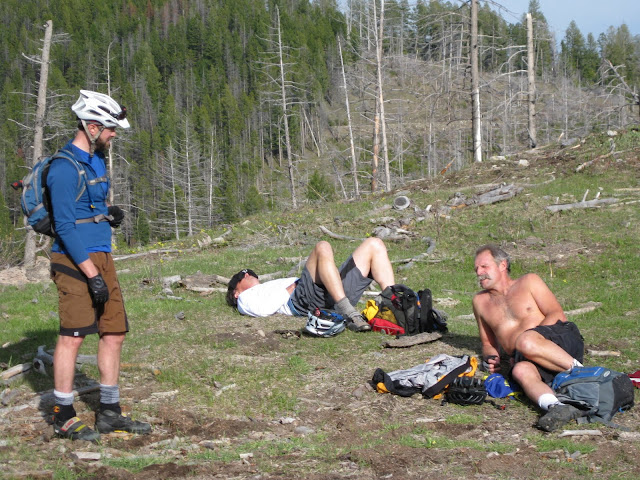 By this time I was personally strung out, in oxygen debt with a lactic acid overdose, so my memory of the events and discussion beyond this point may be in error or the result of hallucinations.  Joining us for the rides were some members of a rival group of Wednesday night riders who decided to see if the grass was greener with us.  Also making a showing was the woman, the  myth, the legend Henrietta,  who deigned to ride with us one last time before going rogue and disappearing into the migrant worker underground when her work visas expires, and where her experience with ground water contamination by virulent strains of E. Coli can be put to good use.  Apparently she has been on the naked mechanical bull riding circuit and just won the world championship in New Orleans last week.  I'm not sure why it is called the naked bullriding since mechanical bulls don't usually wear clothes, maybe it means riding bareback.  Whatever the clothing options, I'm glad that the training she  has received riding with us has finally paid off. 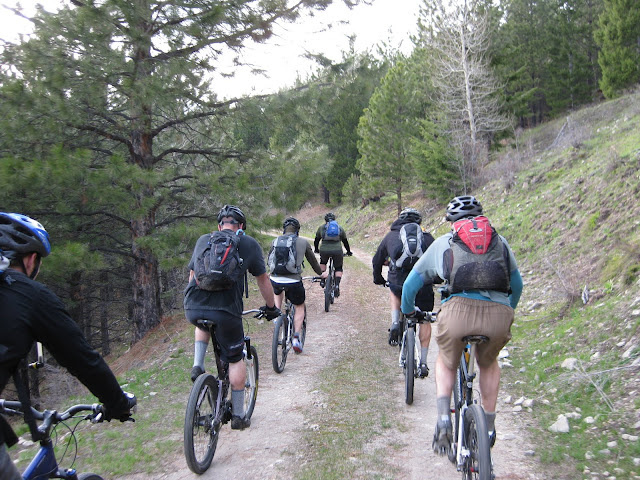 Although we may have reached the trail father down the ridge, we still ended up with our hands on the trail about mid to upper thigh. I had forgotten how fast and fun the downhills are along the ridge.  The several steep molehills on its smooth skin have tended to tarnish it's memory in the past.  Although those short steep nubbins still kicked me off my seat and forced me into bipedal walking mode , I approached them with a different attitude and considering them as pert nipple rather than hairy warts make the climbs much more enjoyable 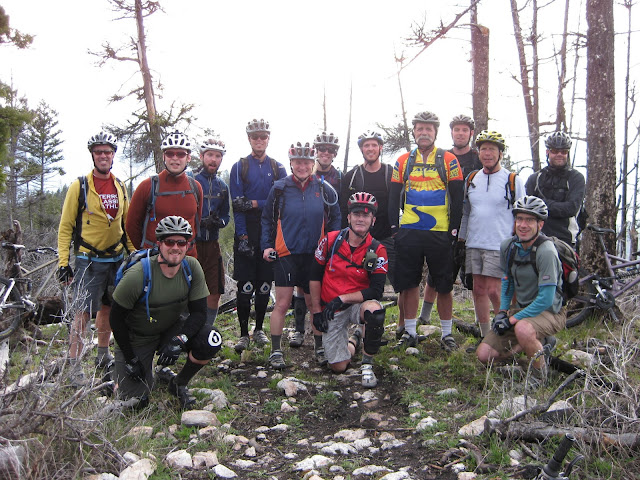 At the top of the last nipple we regrouped for a last time and waited for a few stragglers who we suppose were delayed by a hidden patch of wacky tobacky.  The final descent is a brake pad melting stretch of steep, and usually loose  single track. Yesterday, the forgiving conditions have everyone screaming down the final hill faster and more confident than I had ever witnessed before.

A few people are starting a concerning habit of skipping our before ingesting the requisite bovine and porcine servings, although this time they at least attempted some lame excuses before abandoning us. One claimed he had a chance to get laid last night, either because his wife was out of town or because she happened to be in town and it was coincidentally their anniversary. Another one claimed he had to plan for a high school graduation party.  The excuse was even weaker. He had to plan a high school graduation party. As far as I know it wasn't his graduation, and it's not like it was a surprise that his son would graduate on Saturday. Of course if he didn't show up to help it might have impaired his ability to do some of his own naked barebacking.

The rain goods held off until we started the drive back down Sleeping Child.  I could help but notice the bright light glowing at the garage by the Red Barn. I guess we know what kind of paddling goes on there after the kids are nestled in their beds.
Posted by MonkeyDoo at 2:24 PM