A week or so I received an email from Eric informing me that he had found a web site describing some trails down by Salmon, that town on the the other side of Lost Trail named after a fish which doesn't live there any more. Although trout and steelhead are Salmonid family.  Fun fact: steelhead are rainbow trout with a sense of adventure and a longing for a life at sea. 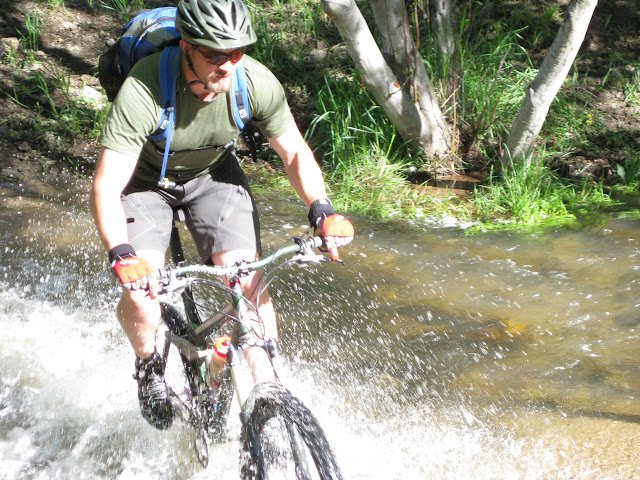 Adventures exploring new trails always gets Jeff a little hot and bothered, so it wasn't too hard to seduce him into coming with me. Aaron, looking for an excuse to avoid doing some gardening was easy to rope in. Everyone else, having heard enough of the fun and excitement  that seems to ensue when Jeff goes exploring, discovered a variety of responsibilities and obligations that took priority this weekend.  When someone doesn't want to upset their mother in law it seems a little suspicious. 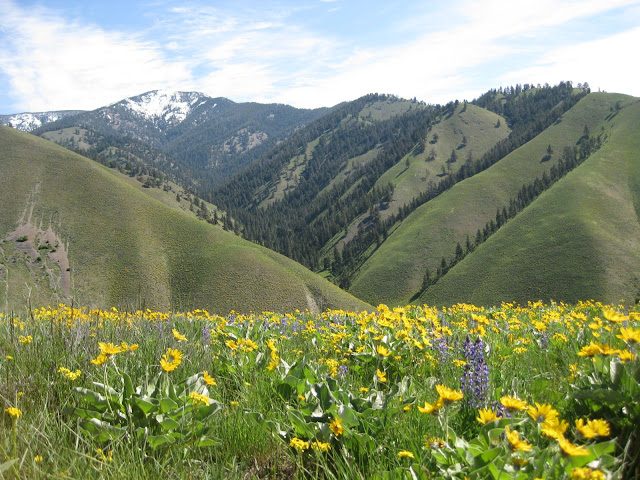 With an early morning start we headed down to North Fork and the Wagonhammer trails. The Wagonhammer creek bottom is a lush verdant green with minimal grade.  As soon as possible with the left the creek bottom oasis for the steep wildflower covered hillsides.  Climbing a loop to the south we son had glimpses of a snow covered Stein Mountain to the east.  Later in the summer, shuttle rides start at the lookout with several 5000' descents available. Once on top of the ridge we were treated to fantastic views of the Beaverhead, Lemhi, and Lost River Mountains in the distance. 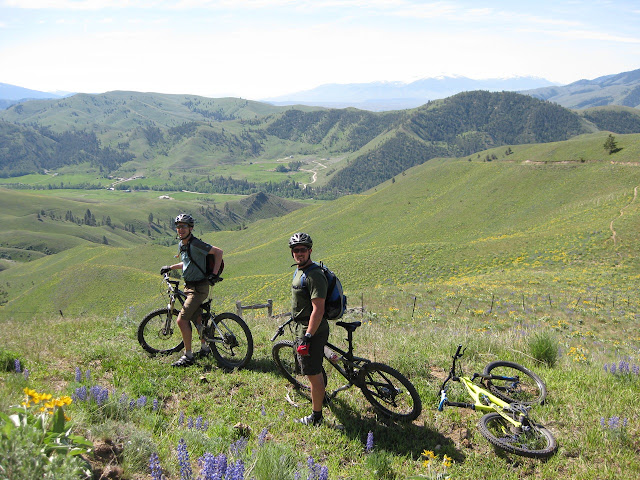 The open hillsides and big sky remind of being on Warm Springs above the trees.  The first descent reminded us all of the last drop of Buttercup into Little Sleeping child with arrowleaf balsamroot and lupine replacing the cheat grass. 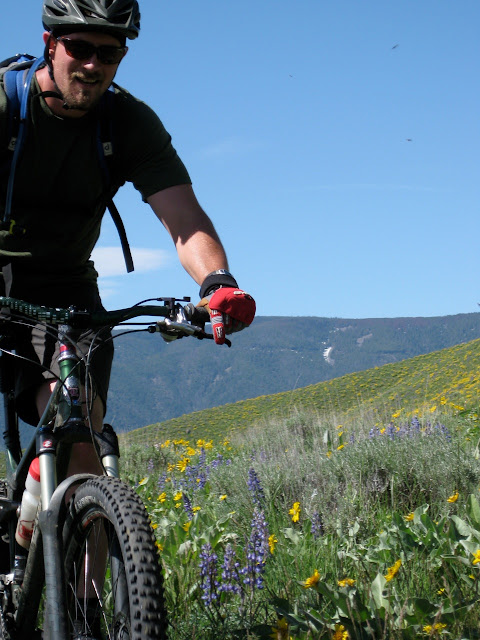 At least there no switchbacks to deal with.  Caution was the order of the day on the on the narrow dry off camber trail. 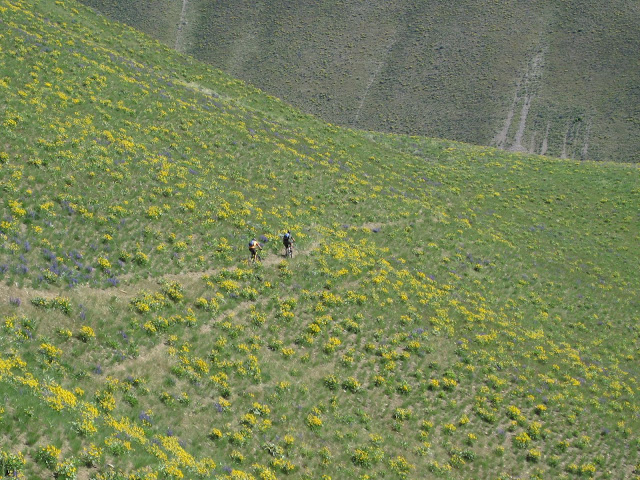 Looping around the ridge the shit started flying as we ran into some hamburger to be that had been fertilizing the trail. We dropped back down into Wagonhammer before starting up the Lewis and Clark trail on the north side of the creek.

The Forest Service deliberately keeps the trails here rudimentary to keep a feel of adventure similar to when Lewis and Clark travelled through here mapping their travels with GPS and twittering their encounters with the Shoshone back to Jefferson in Washington D.C. 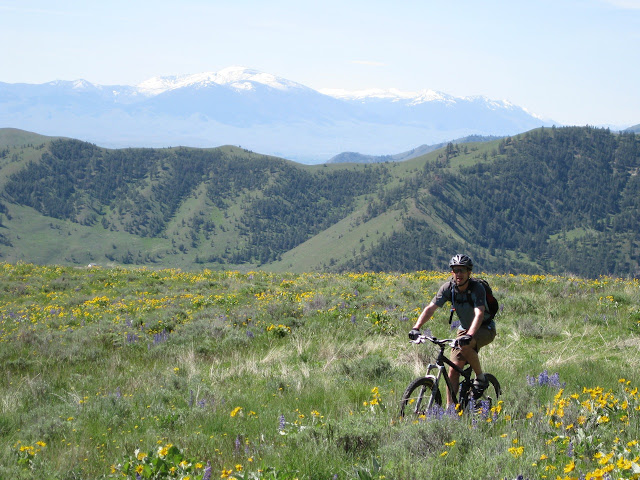 We managed to run into a few Pronghorn and a cow Elk poked her head over an adjacent ridge before retreating. No sheds turned up. Chad and Mike must have already been here.

Having those GPS maps was helpful on a first trip down here.  I'm sure there were plenty of unscripted adventures to be had following the myriad game trails, however we hoped to keep the novelty to a manageable level. Anyone following after us would be advised to take a guide or know how to add a track to your hand held guide. I can't remember Jeff, with his matchless tracking skills and unparalleled sense of direction asking me to check my iPhone to see which way to go. 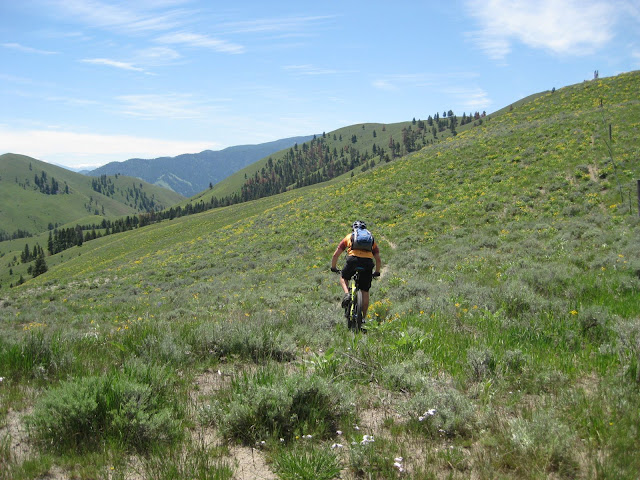 Eventually we found ourselves in Big Silverlead Gulch which we climbed until the downfall blocked the way. Analyzing the GPS after I discovered we had made an optional turn up the Lewis and Clark trail rather than staying in the main drainage.  At the point we were no longer concerned about getting lost and had stopped checking the route on our electronic training wheels.  Turning around to descend down the trail we had a chance to launch a log ramp we had discovered on the trail.  Aaron rode in clean. As far as myself new bike or not, I won't be called Big Air anytime soon.

Riding our Silverlead I was glad of my experiences on Weasel and Sleeping Child with baby heads and grownup heads hiding in the grass and shrubs.  After a carcaass jump we found ourselves on the bottom where we discovered the last half mile of trail to be on private land. Too fried to contemplate turning back we risked the fury of a shotgun wielding local.


Luckily we were to befriend the Dave the landowner as we passed his house.  He is generous about letting mountain bikers using the last bit of trail, he justs ask that we stop and say hi, if we see him outside.  So remember if you end up at the bottom of Silverlead to be respectful of his generosity.  I would suggest that anyone riding in a large group or shuttling one of other descents such as Trail Gulch or Burns Gulch that stay on public land.

We ended up riding 19 miles and roughly 4000' vertical that is mostly lower elevation below 6000' that was already toasty.  The first hot and sweaty ride of the year. If I  ride down there again this summer I'll be shuttling or waiting til the fall and cooler weather.

Posted by MonkeyDoo at 3:41 PM