Before I get into the ride report, I need to make some corrections for mistakes and omissions I have made in previous posts and unlike those paragons of journalism like the New York Times and the Ravalli Republic, I'm going to put the correction right at the top, not buried below the legal notices.  First there are stills runs of it's namesake anadromous fish in the Salmon River. Hermoine did not compete in the naked bareback mechanical bull championship; it was her fiance Martin.  ATVs are not the spawn of Mephistopheles, and finally Chad meant to get a crewcut; he was not competing with Shrek for best hair.

Arriving on time seems to be the theme this year.  When Warwick says 5:30 he means 5:30.  So when we showed up at 5:35 having carpooled down in the Vegomatic leaving a wake of french fry fumes, the punctual clock punchers had vanished up the trail.  Luckily we were not alone, most everybody else decided to be fashionable and we had the pleasure of being joined by some luscious ladies, Jenny and Tracy, who did their best to try and civilize us. 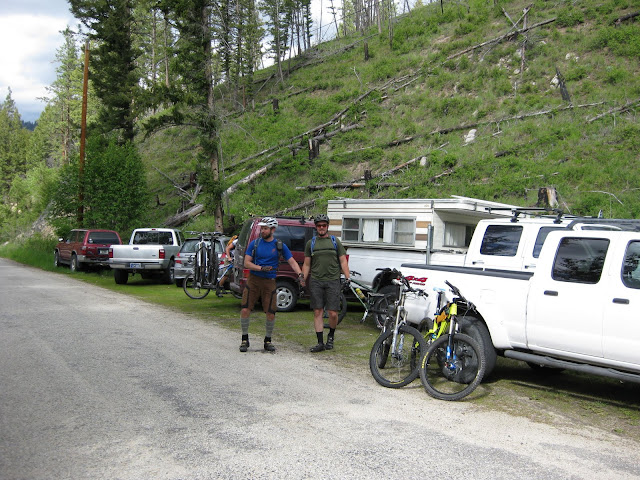 I haven't always been appreciative of the cool overcast spring we have been having.  Riding up Warm Springs trail, the weather seemed nearly ideal for the 5 mile, 2500' climb we had ahead of us.  Every year the same pattern seems to repeat itself. After getting warmed up on the first few switch backs I start to feel confident and start to believe that climb isn't as long as remembered until half an hour into the climb I realize I'm only a quarter of the way to the ridge.  About the time my head feels like it is going to explode there is the well timed short downhill and sidehill around the first knob just before the trail gains the lower ridge line. It was on the lower ridge where we discovered someone had built a bark skinny over a fallen log. The boys played on it for awhile until Tracy rode over it and wondered what all the fuss was.

I guess we spent too much time playing, we never managed to catch the lead group. All the usual meeting spots had been hastily abandoned on our approach. 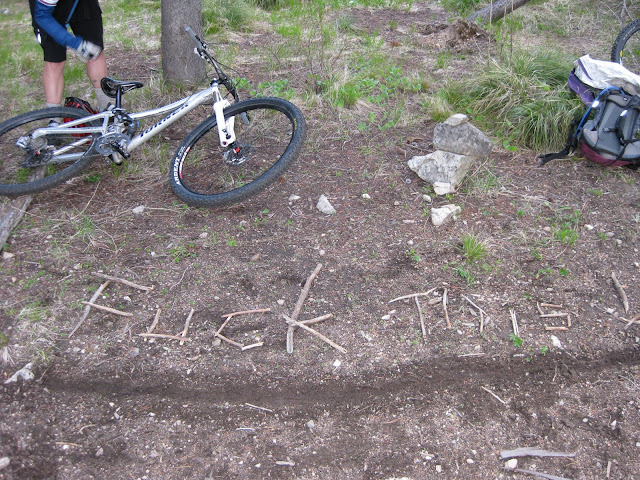 While riding up ahead enjoying the fruits of the prodigious trail clearing efforts of Eric and his elite team, they seemed to have forgotton, much like they did on the ride to Two Good Cabin, that they too where capable of moving trees off the trail. While sawing through the remaining tree on the ridge before Fire Creek, those of us left behind, no rapture for us, agreed that when and if our shirts arrive only some of us will be able to adorn them with the coveted logger badge.  Primarily thanks to Eric, we are proud to annouce that Warm Spring Ridge and down Fire Creek is now cleared a rideable.

A while back, Jeremy said he was going to ride with us again. I was hoping he would show since there is something I have been thinking of trying.  That Weiner in New York does it,  Schwarzenegger did it.  There are rumors that Brad Pitt and George Clooney do it.  Even that Armstrong fellow who I share a name does it.  I have been told that it all the rage in the younger generation and that the women love it.  I'm thinking about getting my chest waxed and I figured Jeremy with his great tan and fantastic hair was the man to ask.

This fascination with having a smooth chest is a bit confusing to me. When I was younger I longed for the day that would have enough facial hair to warrant needing to shave more than once a month. Now I find it annoying enough keeping my ears and nose clean shaven. I have even been appreciating the  chance use to cool weather as an excuse not to shave off my goatee.  I always thought chest hair was part of being manly and growing up. It showed that you were virile. Burt Reynolds and Sean Connery had hair on their chests. (Although Burt is showing more hair than I want to see.)  Now 007 is hairless. After all eating or drinking something adventurous, "Puts hair on your chest."

Before riding down Fire Creek I needed something to give me my hairy chest back and to let me cruise down with an adolescent's feeling of invulnerability.  So I tried the Honey Stinger Waffle that Chad had tossed in with my Ibis.  Now I know why. I ended up buying a box of them; fuckin' Chad.

Riding down Fire Creek I had an unpleasant encounter with a rock that scampered off the edge of the trail and took my front wheel, a blood offering and some elbow skin with with it. Leaving me with my chest hair and middle age caution.

On the final stretch along Crazy Creek a Chupacadena snatched Jenny's derailleur.  Ever the gentleman, Sean traded bikes and assisted by two pushers and drafting behind two others was able to coast the road back to the trucks for the usual beer and BBQ.  Someone brought a sampling of some unusual small game that is season. He said they were called vegetables. They were quite tasty.


A quick review of the Rock Shox Reverb.  I love the ability to fine tune the saddle height, and it is so smooth when it working.  It may not be quite as maintenance free as the Gravity dropper. It had been getting finicky the last few rides and finally stopped adjusting during the ride. Time for some bleeding.

Posted by MonkeyDoo at 3:05 PM