Urgent alert: Cayla's bike was stolen yesterday. From Brett: "Stolen off bike rack at good food store at 2 pm tuesday.  Bike was locked to rack and the asshole on tape cut lock than came back for bike a little while later.  Bike was a small blur lt with a fox 36, blue handlebars and zip ties, xt crank diva seat with rock shox reverb seat post.  If anyone sees it please call police and kick in nuts and teeth.  Thanks Brett and Cayla."  Thief was wearing a hoodie. So if anyone in Zootown sees a guy in a hoodie, we have the man who needs his gonads and orthodontia rearranged.

Before the ride, I was packing my Deuter and debating whether the bring my rain jacket. It had dumped the day before and the clouds lingering over the Bitterroots looked looked like they could turn into something.  On the other hand I had put the long heavier downhill Lyrik back on the bike, so I was trying to keep things as light as possible.  As everyone knows the only thing worse than bringing a rain jacket and not using it, is being captured by the secret police in some middle eastern country and thrown into a dungeon where they introduce you to Morning Thunder, and it's not the Celestial Seasonings mate' blend breakfast tea that I like to start my day with.  Instead the Syrian or Iranian version of Morning Thunder starts with steeping your personal tea bags in a warm bath to let them get all dangly and loose before dropping in the live wires.

So I left the rain coat behind, hopefully risking something less than torture by the Mukhabarat.  I also left behind the handsaw since plenty of other stronger and faster riders, such as Quick Draw McGraw had already joined the backcountry forestry brigade. 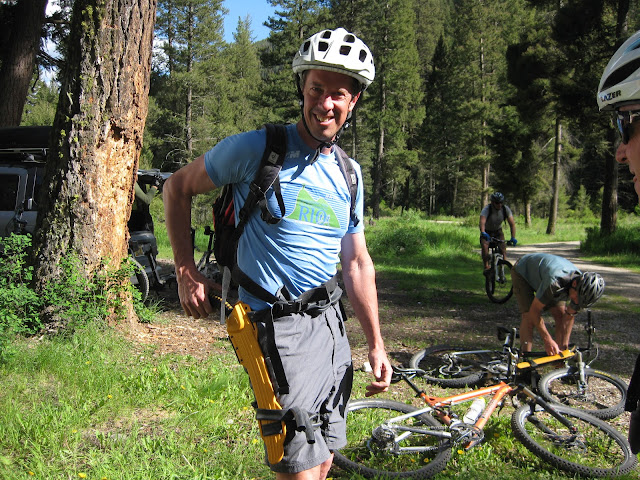 Whether it was Aaron's difficulty digesting lunch or the anticipation of a big turnout for the ride, someone brought in a bunch or Porta potties for our use. Wow they knew we would have nearly 20 people show up I don't know, maybe they knew the sunshine, cool weather, and brownie dirt after last night rain would inspire us all. 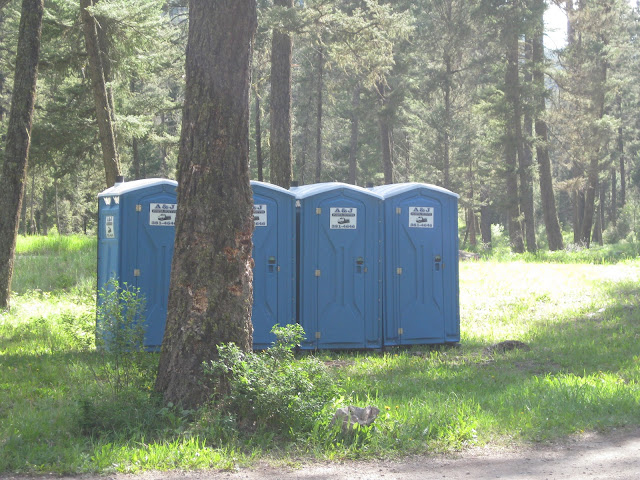 Ridlon returned for ride after a long absence loitering in Bali and Nepal and wherever else, to take the place of  our other  world traveller Joel, who was gone to BC, just after getting back from the Middle Fork.  This is one ride where showing up late is a benefit with the luxury of parking at the upper trailhead like Knolly Jeff and the Kiwi, but this year they missed the chance to  make the discovery that I did as I slowly drifted off the back of the pack, courtesy of the previously mentioned fork.  Beau has a secret identity: Hammer Man. 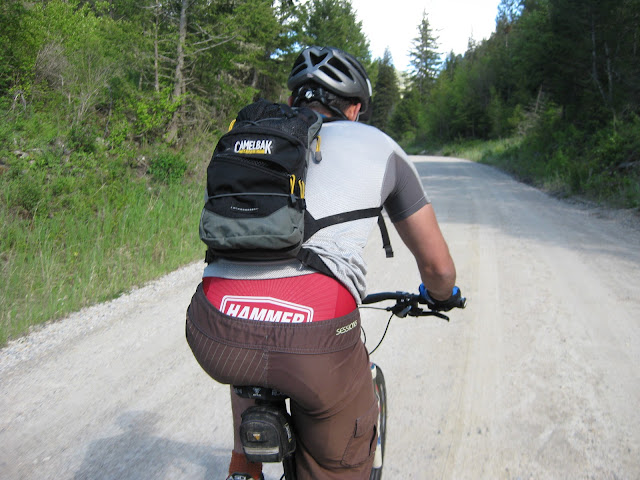 Almost immediately after we entered the single track realm, downfall was the story.   It looked a lot like this.  Find tree. 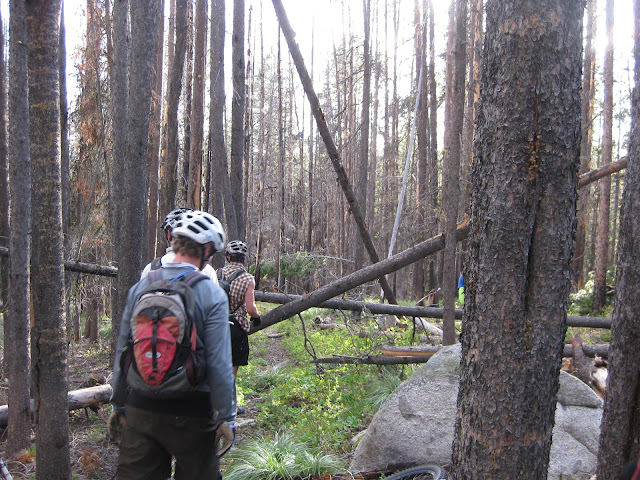 And this. Get off bike. 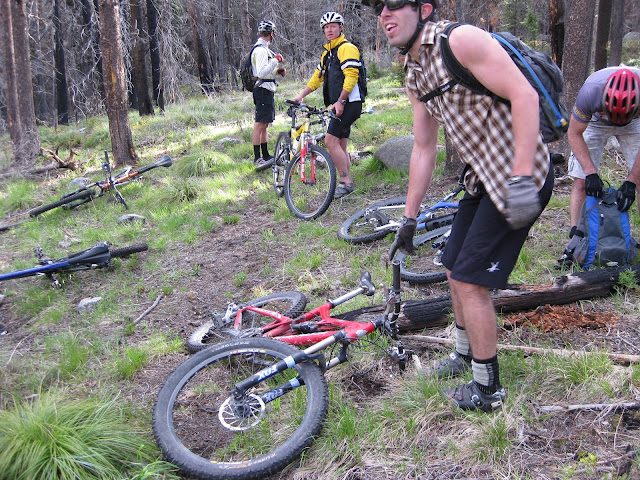 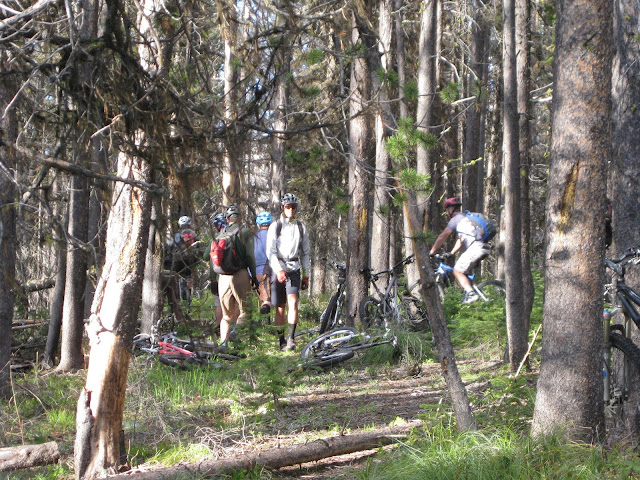 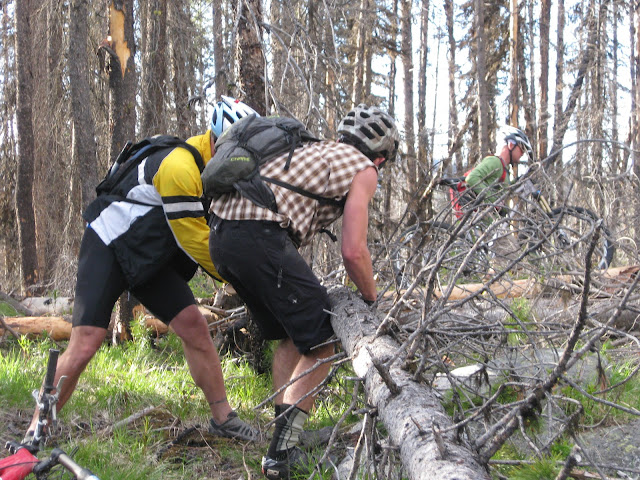 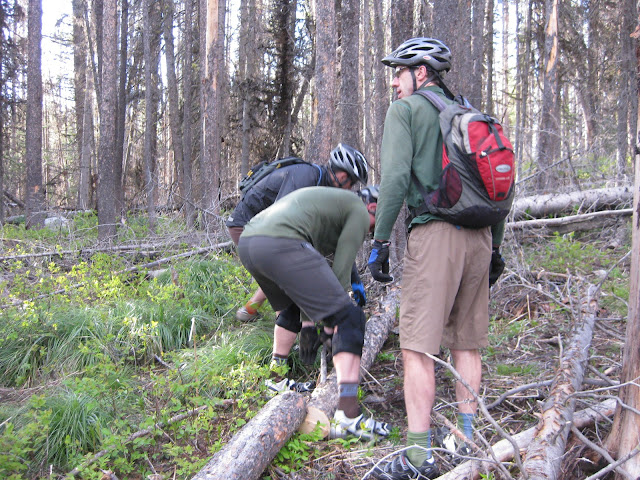 With all the manpower we eventually managed to clear the main loop; leaving the remainder of the trail to 313 for another day. 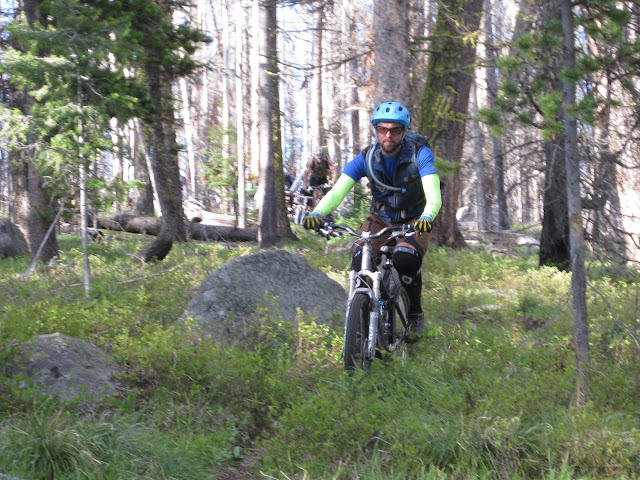 Looking good. Sometimes I wonder if someone wants to be a ski and bike model. 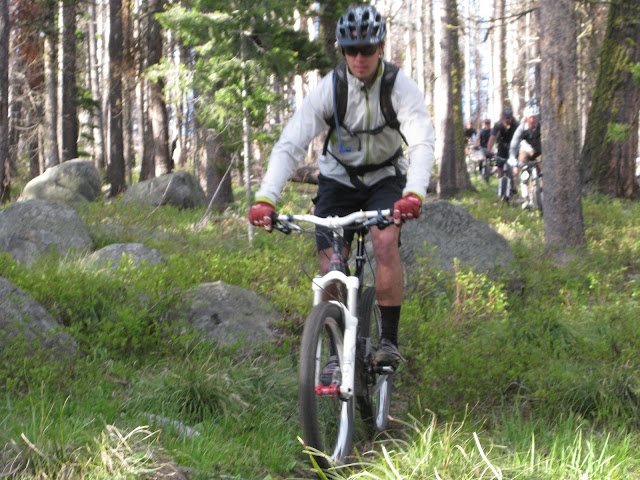 Along the way we managed to get glimpses of the ever enjoyable Weasel Ridge downhill. 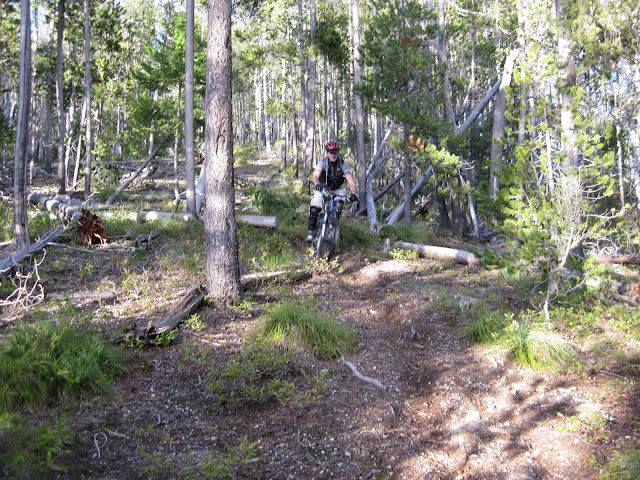 As slow and painful as it was to climb, though not as painful as Sex in the City 2, with my bike set up for shuttling and downhills; it was pure joy on the way down. I finally managed to ride the steep drop to the creek and the creekside obstacle course out. 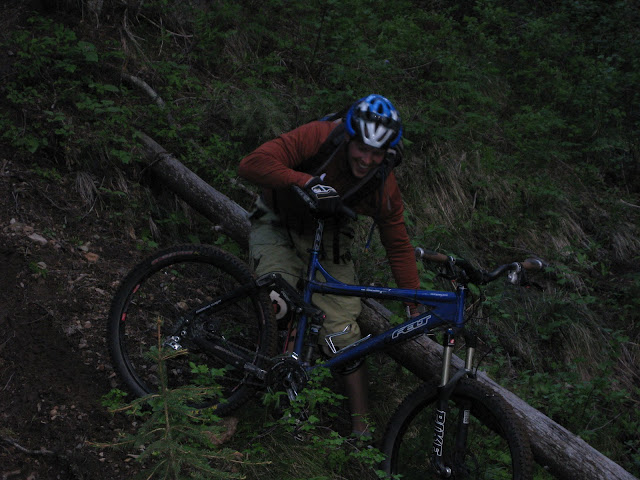 Not everyone was as lucky.

With practice it gets better, especially with the power slide.

Many thanks to Chad and Jeff for clearing the bottom.  If only the dip shit  third wheel with them had managed to brush more than the last quarter mile.  Compared to last year the creek was lower, and feet were drier.

In order to keep Red Barn busy (not enough damage this week, only one rear derailleur) and to stay consistent with last year's ride schedule plan on Blodgett to the Wilderness boundary next week.  Sorry I'll miss it.  I'll try and post from Whistler instead.  Food for thought for July rides, Super D series in Missoula

Posted by MonkeyDoo at 1:32 PM