If I was a betting man, and if I was in Macau,  and if a member of a Chinese triad was threatening to slit  my throat with a rusty razor if I didn't bet on where the idea for this post came from, I would bet on the Bratwurst.  Two Hamilton Packaging were happily digesting away in my gut last night when I had my insight.  The other bet would have been on hallucinations caused by Rickettsia rickettsii.  As it happens, while those bratwurst were being broken down by proteases and bile, I discovered a Dermacentor andersoni had managed to embed itself below my belt.  Normally having someone's head in that vicinity is rather pleasant, being tea bagged by a tick is a different story.  It made me consider my opinion on the brazilian. Chances are the tick was left over from the weekend, probably the one Adriana has thrown into the truck, but it was still too early to be having febrile hallucinations.

So what was the great idea that the brats had given me. It was an understanding of the connection between Wednesday night rides and cooking a meal. First, both require the freshest finest ingredients, and the trails around here don't get finer than Warm Springs Ridge.  For those of us who are omnivorous, the key ingredient is the meat, which in Bitterroot means wild game.  They don't come more wild or gamier, than the 5 guys I rode with last night. They are the backstraps of the Wednesday night crew.  The last thing you want are the gristle, fat pieces and pick slime that the naughty moose coats with BBQ sauce to give away apres ski.  You know the mountain equivalent.  The excuse machines who ride the trail on Sunday that you cleared on Saturday.

Once you have the ingredients, there is the prep work. This year thanks to the efforts of the Bitterroot Backcountry Cyclists, the trail prep was about as perfect as it gets. (Thanks again to everyone who showed up. Hopefully next year it will be bigger and better.) Although it looks like next year we'll need some lopers on Fire Creek.  The regenerating lodgepole are coming back with a vengeance and the forest service standards call for a 8 foot wide swath clear around the trail, as it was the new trees kept trying to grab the handlebar and help me steer. 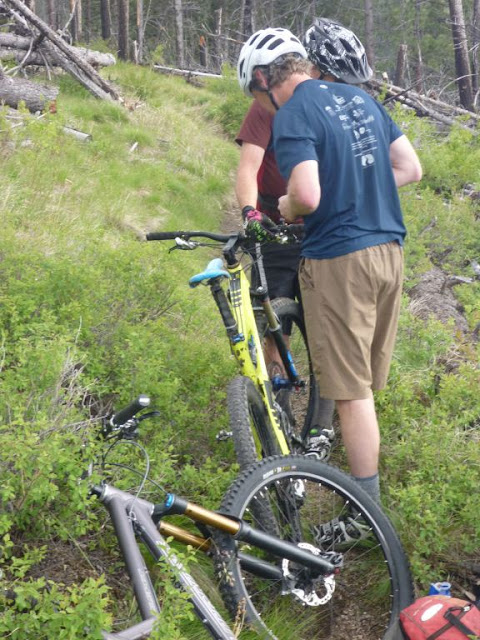 Inevitably when cooking a time will come when some key ingredient has gone AWOL, all the tamarind paste is used up and all you have on hand are couple of limes.  Last night two screws for my front shifter made a break for freedom, and my shifter took a dive into my spokes. Even going uphill, amazing things happen when forward momentum is converted instantly into angular momentum.  With the successful escape of the screws, the usual substitutes of zip ties and electrical tape temporarily remedied the problem. 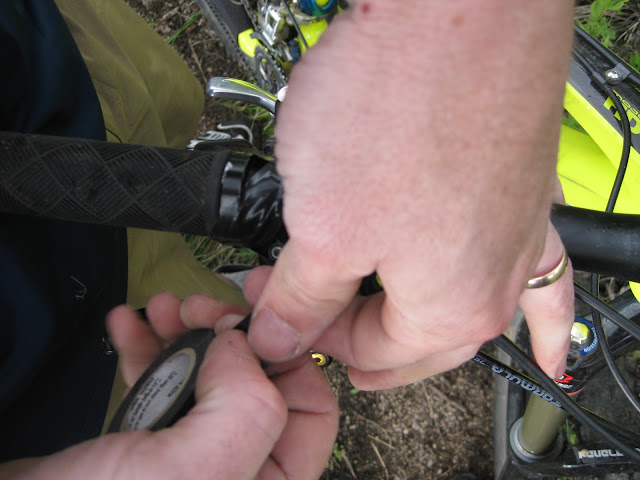 One key of cooking is getting the temperature right.  Sometimes a low simmer, sometimes a hot grill. I can't think there are many times that I would say this, but low 50's and overcast is the perfect temperature.  I have climbed Warm Springs on plenty of a hot, bright sunny days, and I'll take cool, cloudy, and even pellets of graupel every time.

If anyone has ever done any baking, especially something like brownies one of the keys is getting the moisture right.  Too dry and you're eating a brick. Too wet and it's all sticky goo.  Trails are the same; mud or sand on the extremes. Last night we had perfect brownie texture,  soft  and a little grabby.

Last night's Warm Spring's soufflé turned out perfectly browned, and we discovered the last commonality.  A multitool is as good for flipping burgers as it is for  bike repairs. 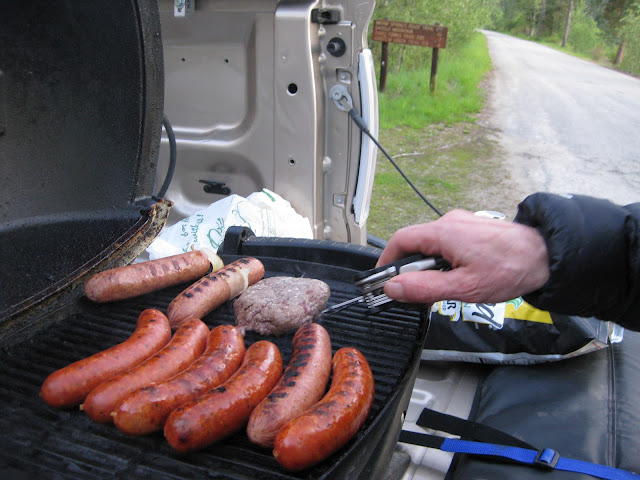 Posted by MonkeyDoo at 3:19 PM