Awhile back I was talking to a Wednesday night virgin and I encouraged him to get experienced.  His main concern was that the rides sounded too social, and that would impair his need to ride fast.  Eventually he tried a ride, and the group rabbits quickly disabused him of the notion that our post ride beer somehow impairs our riding ability.

This got me thinking about our motto, "A beer drinking club with a biking problem," and how this is more apt than we are willing to admit.   After a previous post that mentioned my current relationship woes, I received a few comments that confirmed that I wasn't the only one who finds these rides to be an antidote for the Facebook and Twitter masquerade.  In the words of one rider whose presence is sure to be missed and who I hope doesn't mind me sharing his thoughts, since they mirror mine, "That collection of my favorite assholes has seen me through hating my job, not sure what direction my life should go and the bumps that appear traveling down the road of marriage." 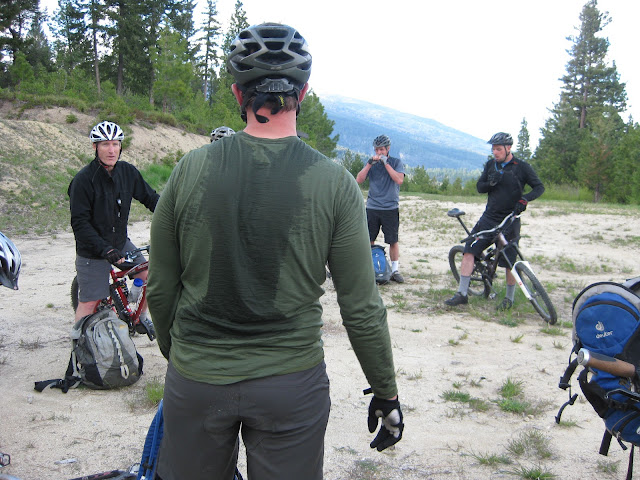 After last week's arctic expedition, ideal riding weather returned. Overcast and just warm enough to let our shirts soak up some salty pack juice, but not enough to induce eye burning headband leak.   Along the way a startled white tail almost took out Brett. If only Brett had been faster, the deer slower, and I had my helmet cam on.  After climbing over the hill from Lost Horse and a few more warwicks up the road we regrouped at Como Overlook.  Too bad that when looking over you can't see the lake.  For some of us, we have always felt that this ride was lacking something.  While it has a long climb road slog, it was missing that essential Bitterroot: the hike a bike. Having poured over old maps and Google Earth someone noticed signs of a old road climbing the ridge above the overlook. 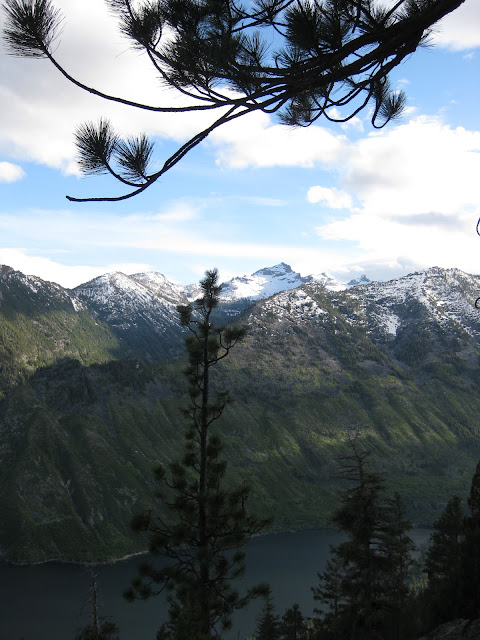 The rest of us pushed and rode our bikes, except for Rob in a Dylan worthy display of climbing prowess pedaled it in it's entirety, another half mile up the old reclaimed road hoping without reason that the Subaru babes that had sped past us earlier had decided to hang out on ridge high above Como.  Needless to say, no willing wanton women were found, although we did find a real overlook of the lake. 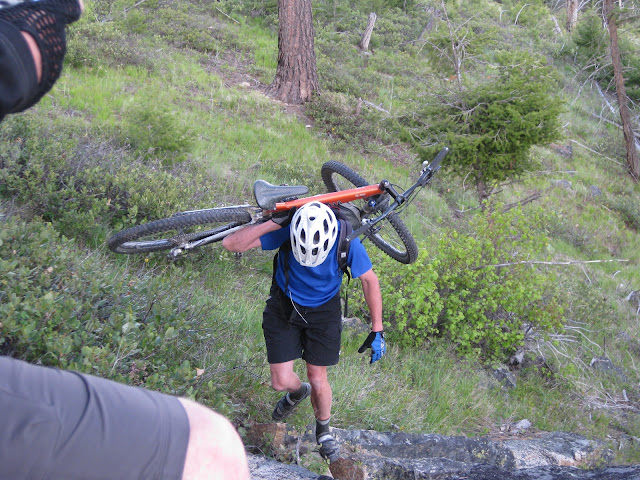 Luckily we dissuaded Dean, who was still dreaming of the the grassy knoll free ride on Butterfly two weeks ago, from attempting a repeat straight-line down to the north shore.  We, and especially Dean, were even more lucky that water in canal discouraged Dean from any more ill advised line choices.


Even with several gap jumps attempts, all of the favorite assholes returned in one piece.  The only biomechanical issue was an episode of cramping cured with a few sport beans.