OK everybody, everything is all right. Chad can get out from under the covers and and let go of Tracy's hands. Warwick can open your eyes, get your hands off your ears, and stop saying, "Na na na, I can't hear you.  Joel, unbolt the doors and take the magazine out of your AR-15. The ride to Bald Top is over and no one is going to make any of you go. 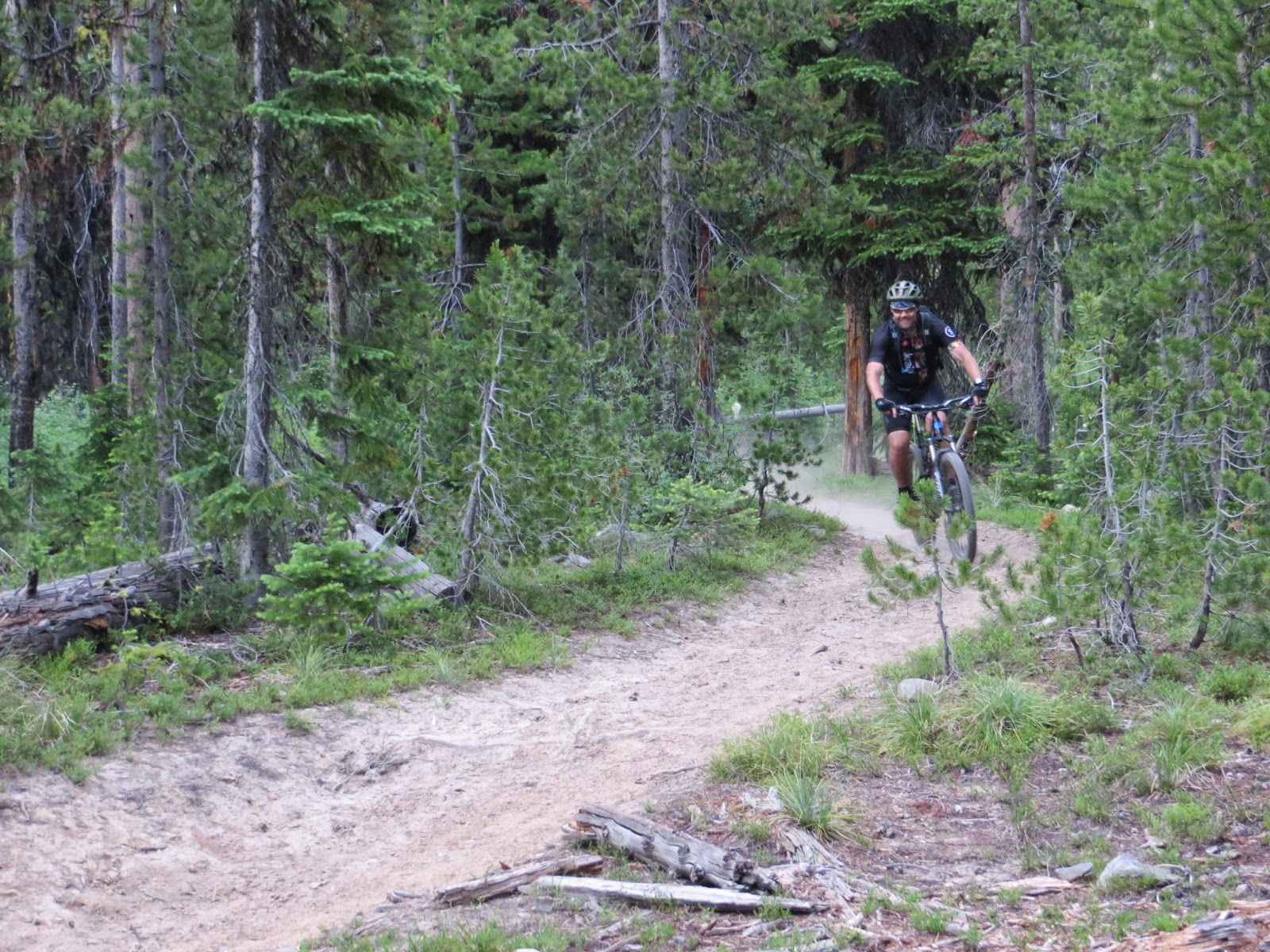 We managed to find five brave souls willing to confront this menace.  So feared is this ride that it has been at least seven years since anyone has ventured onto its forsaken terrain on a Wednesday night.  Memories of bloodied faces , thuds and grunts just of the trail on moonless nights, and the possibility  of spooning with Shrek still haunt many of our dreams. 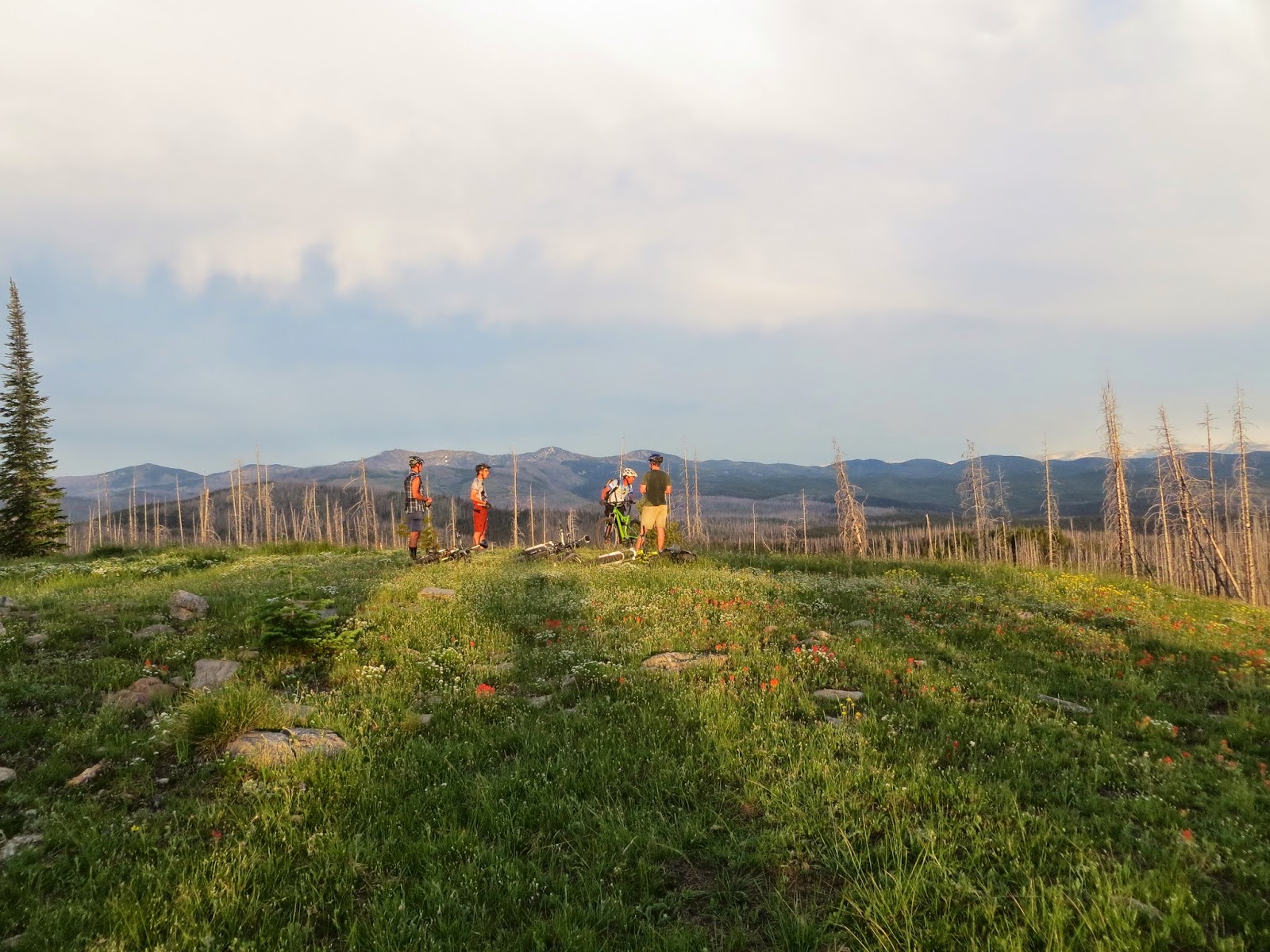 Climbing fifteen miles of fire roads is enough to depress anyone, well anyone not named Beau or Dean, or Fitz-Barn participants, or the Montana Hell Ride organizers.  I guess quite a few people like it, but in the words of Rob. "I don't do roads. I do singlet track," and that is how the Wednesday night ride rolls. 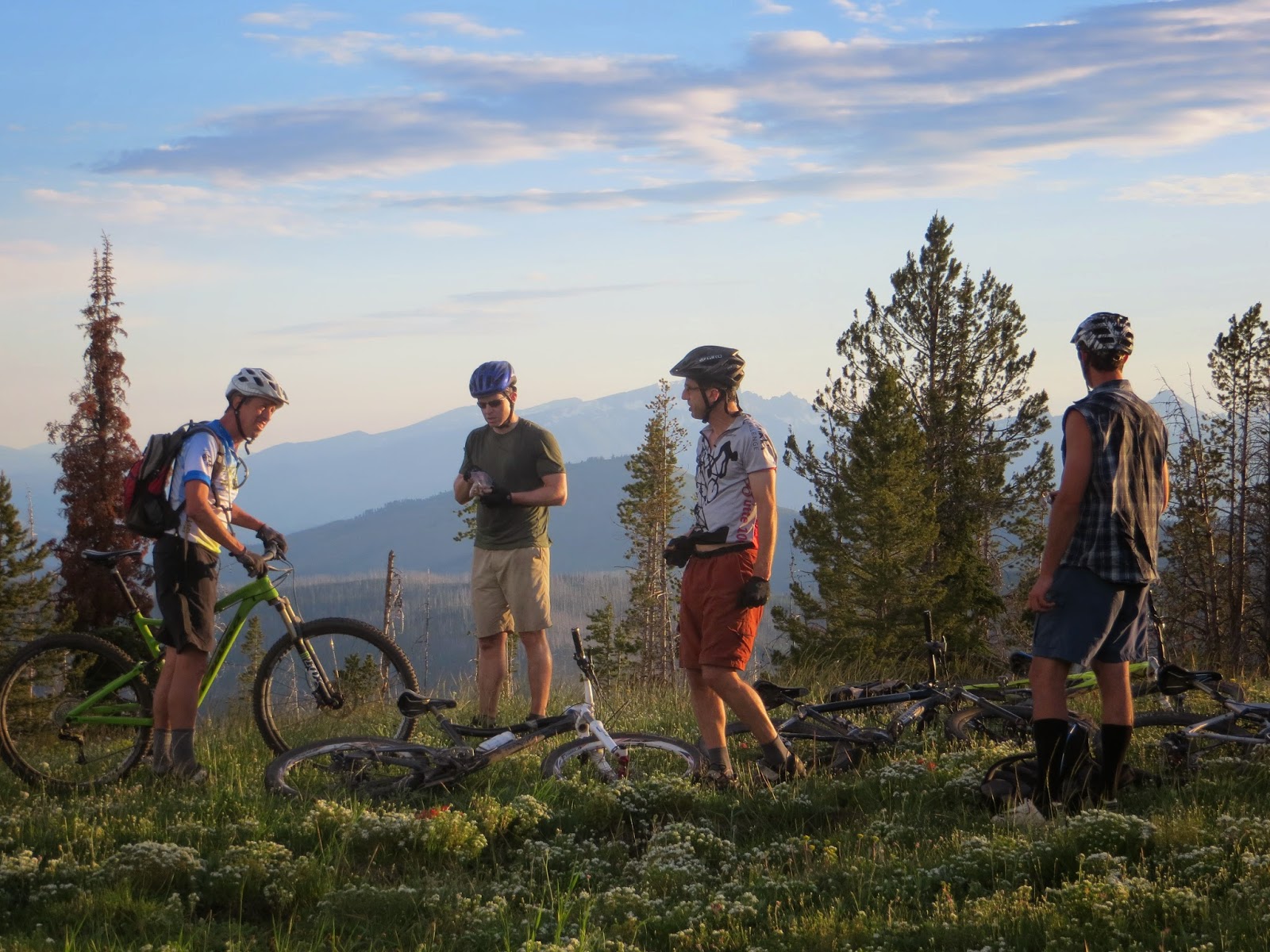 I know I was fearing a searing ride up south facing sun blasted Two Bears road.  I filled my water reservoir to the brim, brought a filter and electrolyte tablets and ended up barely drinking half the water. The clouds that rolled in for the afternoon turned Bataan into a pleasant jaunt. 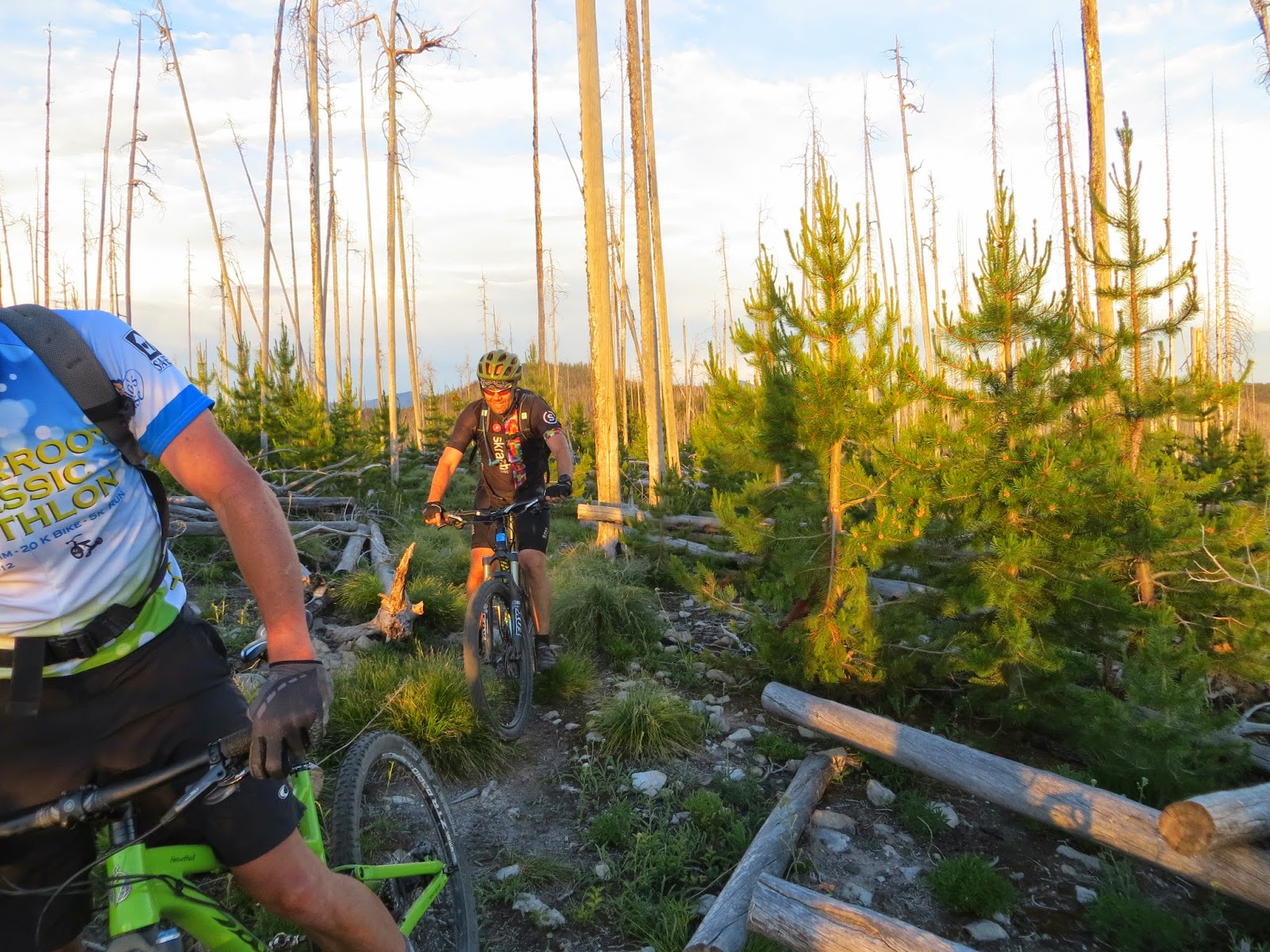 When I started the ride I had a fantasy, several actually, but only one that applied to the ride.  I had discovered that some Missoula scumbags had come down and created a Strava segment on our turf. One that happened to coincide with the ride, all the up Two Bear to the saddle, and I hoped maybe I could reclaim the KOM for the Bitterroot.  Unfortunately those interlopers were of the fast Thoroughbred variety on skinny tires, and I'm at best a fast donkey. Plus they weren't saddled with one of Leon's lambs that I had borrowed from my pasture (It's not stealing if they are on your land is it?) and now had slung over my shoulders as a sacrifice to the Bald Top Demons. 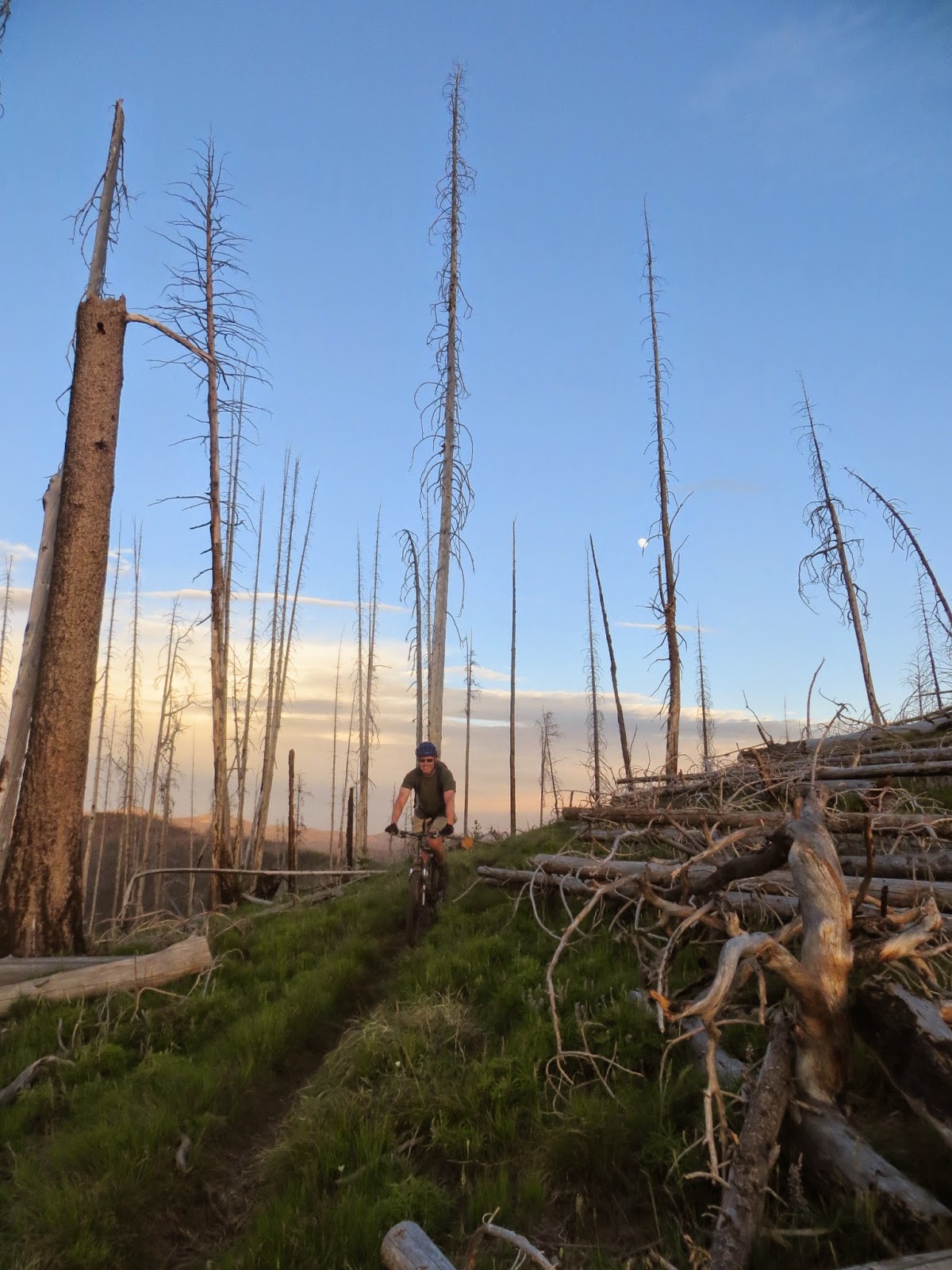 So when everyone else stopped at the usual pullout on Two Bear to recover, I plodded on, failing to redeem the Bitterroot trailing the KOM by a little over 4 minutes.  If there was any satisfaction was the knowledge that if John or Travis were being timed they would have taken the honor back for us.  John started after me, caught up, took a break, passed  me again and was long gone before anyone else reached the saddle. 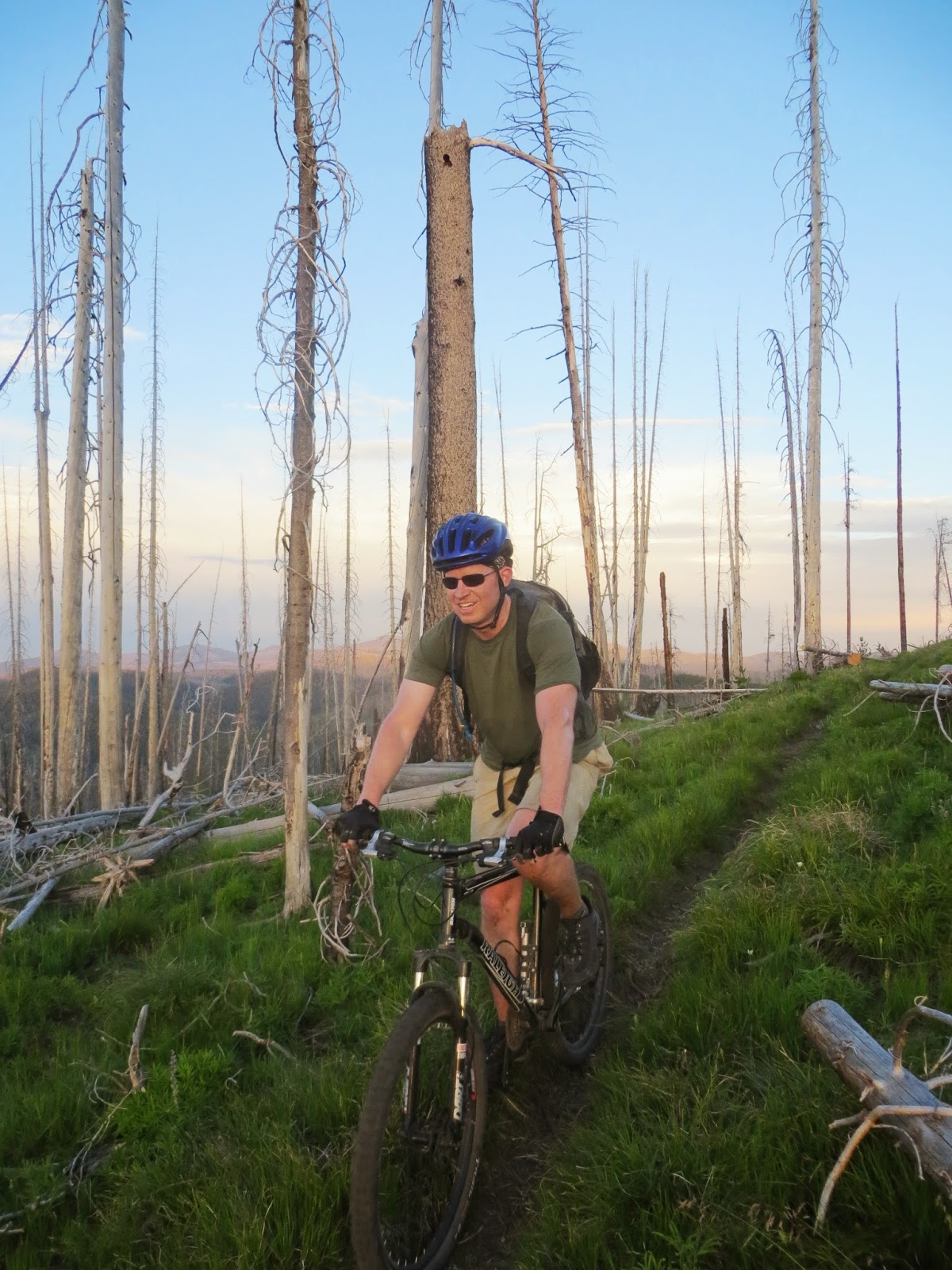 Once the rumors of our successful ride and return permeated through the community, people sidled up to me and whispered, "What was it like?  Would you do it again?"  If my name was Dean, probably not.  I would be three for three on coming back out in the dark.  While the lamb seemed to satiate the demons and allowed the rest of us to pass unmolested, Dean seems to have his own personal curse.  Not sure why maybe he used to rock a mullet or has contemplated hair plugs.  This year atop a new Horsethief on it's virgin ride he managed to flat and then puncture the spare tube while attempting to fix the flat. 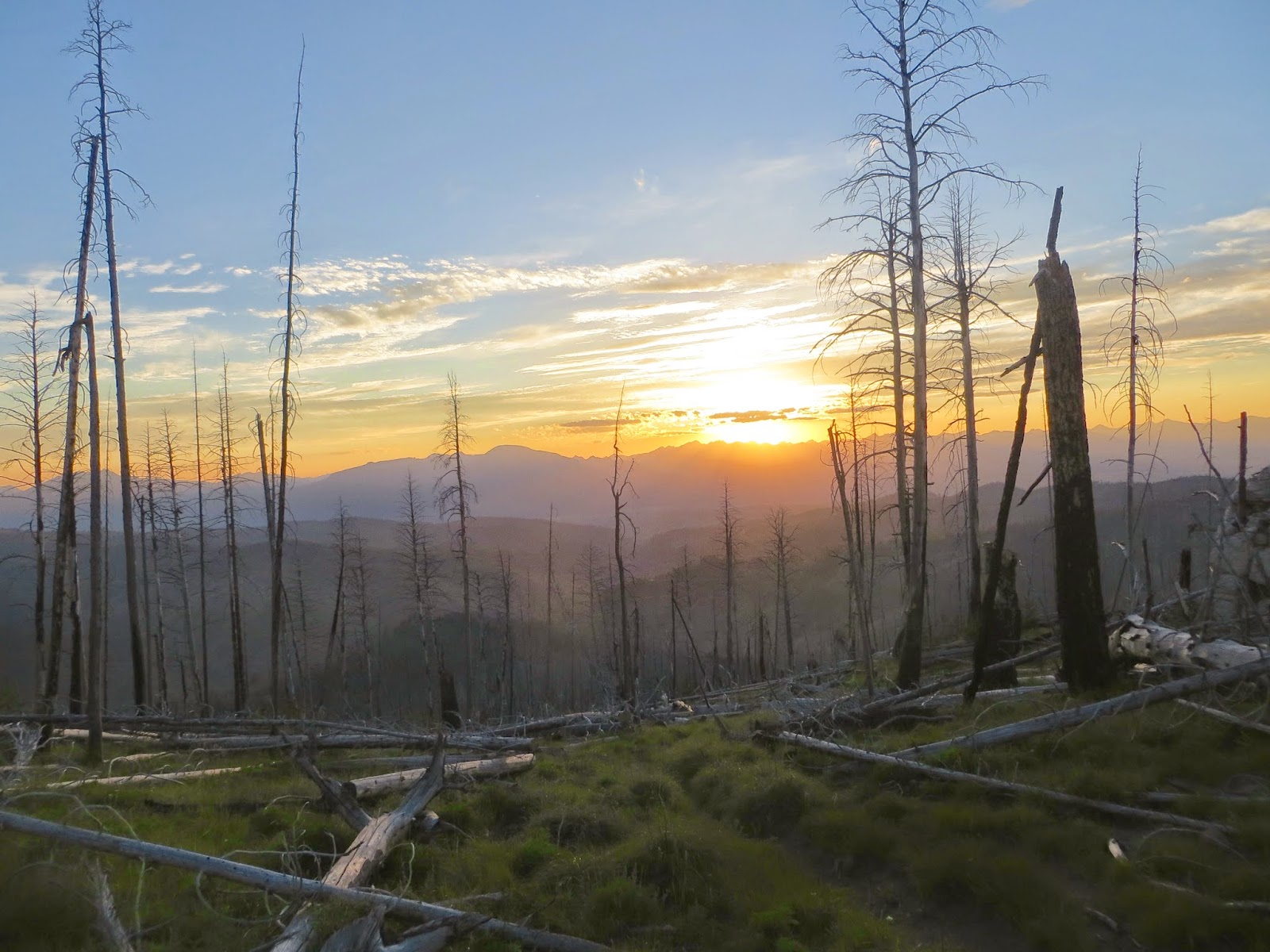 For anyone else, I'll be honest.  I'll ride it again as long as it has been cleared, maybe not right away, but it is worth a repeat.  On top the trail is sweet between the false summits, and would have been more fun if I hadn't toasted my legs chasing the Strava KOM on Two Bear.  The top of Bald Top has some of the best views I've seen in awhile.  It appears to be the high point of the Sleeping Child area with great views of the Bitterroots to the west and the Kent, Congdon, Fox collection on the Sapphire crest to the east. 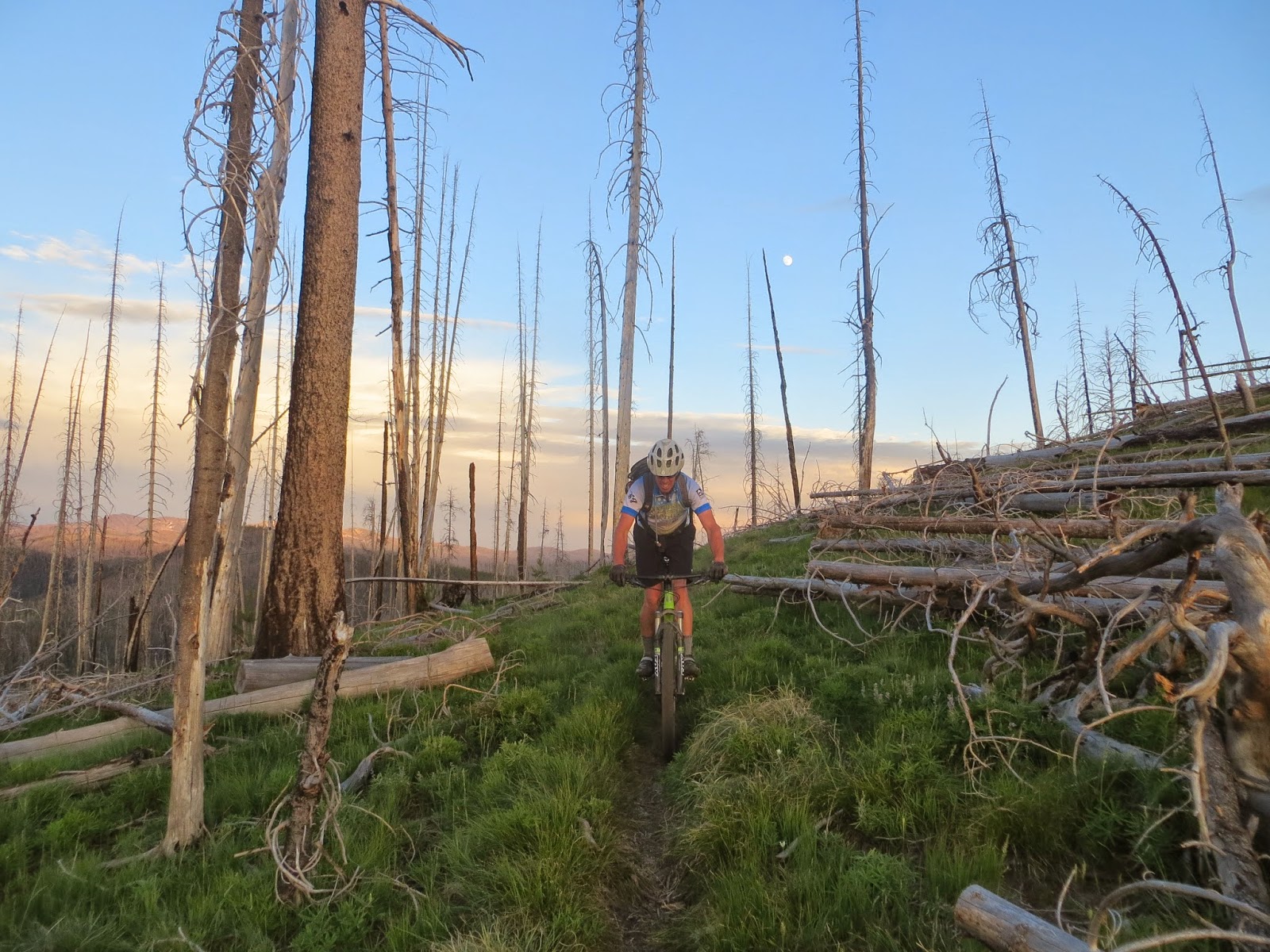 The main downhill is one steep mother.  IMBA recommends a grade of 10% for flow trails, and I was recently working on some mapping of our trails and for the ratings a difficult trail (black diamond) has a 15% grade and an extremely difficult (double black) has a 20% grade.  Bald Top maxes out at 40% and averages somewhere around 25%. The last half mile reminds me of the switchbacks at the end Buttercup except looser and steeper. 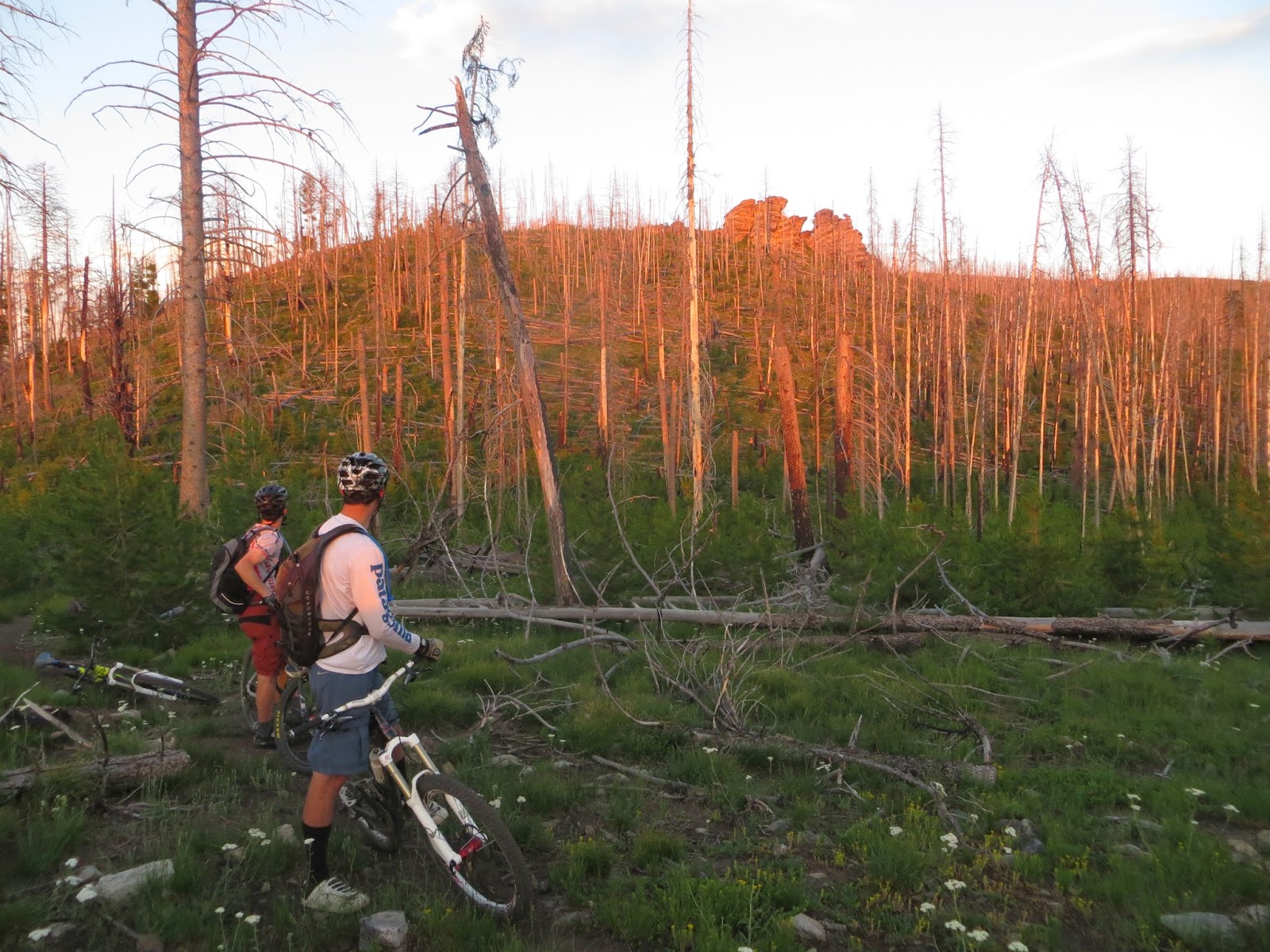 While hanging my ass way back over the rear tire is fun for awhile, I could have used a few more chances to let my rotors cool down and maybe the chance to make a few turns in the last 2500' vertical. 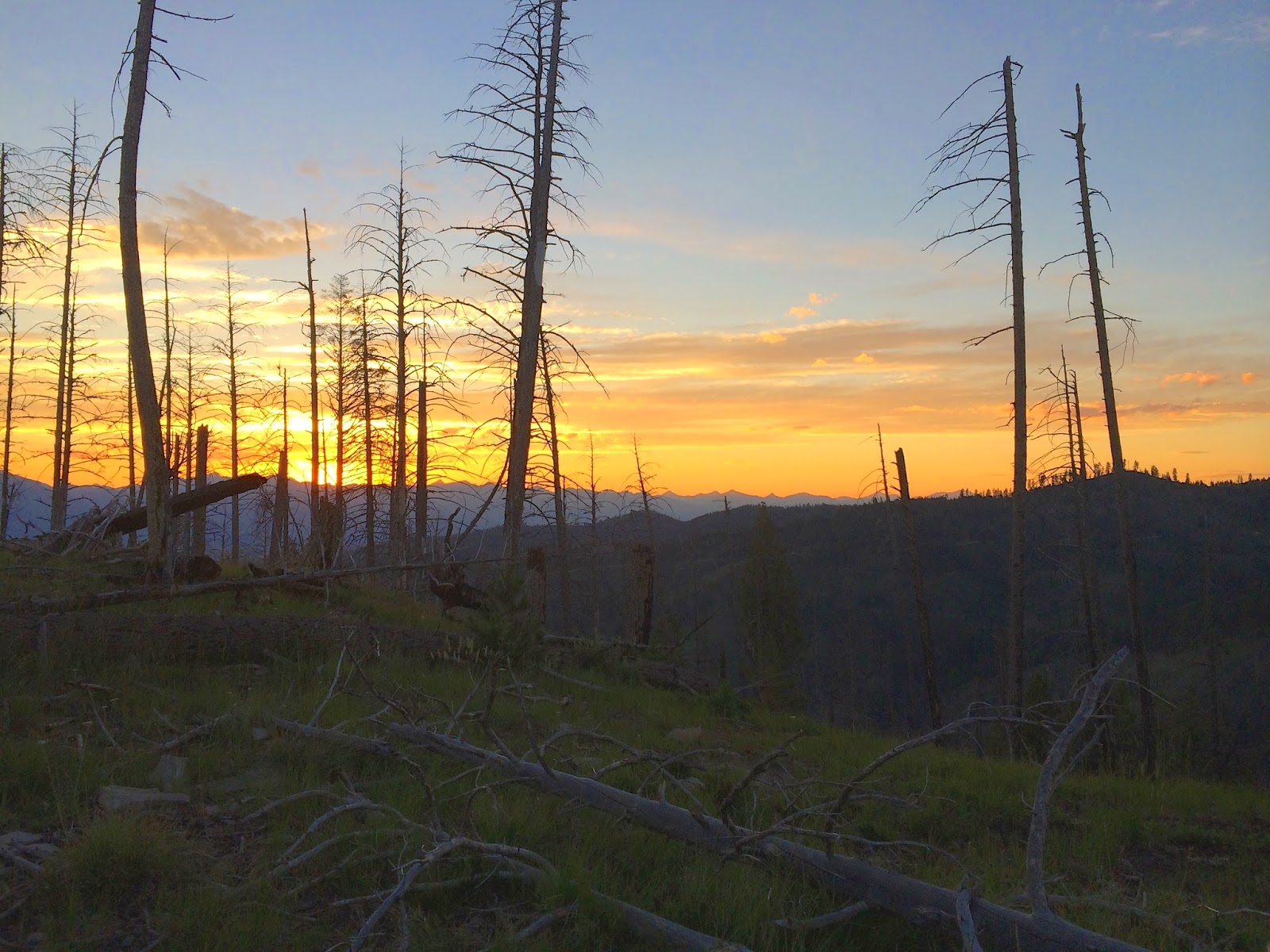 Posted by MonkeyDoo at 2:04 PM